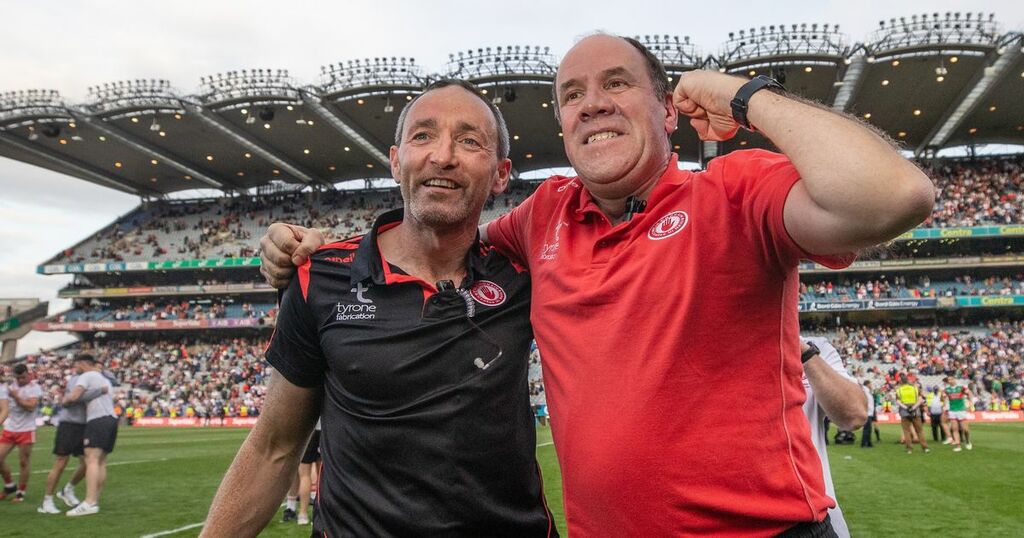 FEARGAL Logan can't help reflecting on the past - recent and ancient - as he drank in Tyrone's latest All-Ireland success.

In the context of the Red Hands' journey to lifting the Sam Maguire yesterday evening, recent history is most relevant.

For it was as recent as June 12 that rampant Kerry put six goals past Tyrone at home in a League semi-final. In terms of championship ambitions, Tyrone's looked pretty much non-existent after that.

Approximately nine weeks on, this team - managed jointly by Logan and Brian Dooher - have been crowned as All-Ireland champions.

"We had a great night, ironically, with Killarney and all the rest," recalled Logan last night.

"But it was just a six goal mauling and that stripped everybody bare, and myself and Brian, as you know you're good as your last result and as good as your next one.

"That was June 12th and it feels as though it was a year ago at this stage, but it was a lesson in football and aggression and cuts and how to score goals.

"And we were everywhere, all over the shop, and people were entitled to say, you know, 'what the heck's going on in Tyrone there?'.

"So listen, we're lucky there was a new shot at it with Cavan, then Donegal, then Monaghan and then Kerry and then today.

"We knew it wasn't the end of the world but it wasn't a pretty bus journey home the next day.

"My starting ambition anyway, without declaring it to Brian, was to win one match. We managed to do that as Tyrone managers and then it just progressed from there.

"We had no big plans or targets to be honest that way.

"We just mucked in night after night and saw where it led us and it was fairly up and down.

"But it has ended happily with Tyrone as All-Ireland champions and players who have been battled hardened and committed their life's cause to it, who are outstanding footballers.

"I'm so delighted that they've got All-Ireland medals because it's something special."

The management team is a reflection in a way of Tyrone's relationship with the Sam Maguire.

Dooher won three All-Irelands under Mickey Harte in that glorious five-year period between 2003 and '08.

Logan was part of a generation that got a final - in his case, in 1995 - but failed to seal the deal.

In a way, he believes, this five-point win over Mayo compensates for that, given his own involvement now.

"Well, it probably does in truth, there's no getting away from the fact that '95 was a very painful day for Tyrone and in particular for the '95 lads who I ran with in the day and still would run with," he said.

"I took all their names on my phone here, I'd love to give them a shout tomorrow and say 'listen lads, that's one that got away and we didn't redeem it as players, but in my mind anyway this is somewhat of a redemption'."

Tyrone deserved their victory, mainly because they took their chances and Mayo failed to convert theirs.

"Yeah, in the immortal words of Paidi O'Se, 'a grain of rice tips the balance'...that's what you live and die by in football," he said.

"You can be very sore as a manager when you go home and that grain of rice has gone against you, so it was small margins.

"But probably the goals set us up, goals win matches and we were lucky to get them and they worked, and our midfield was outstanding.

"As Brian says, we knew they were good footballers, it's hard to see that sometimes but we're seeing them every night.

"Our kick-outs the last day, there was a lot of scrutiny of that against Kerry and our kick-outs tonight, Niall Morgan is an exceptional goalkeeper and catches and flick-ons and whatever...of course the further up the field you are, the closer you are to the net and if you don't get up to the goal line, how do you cross it?