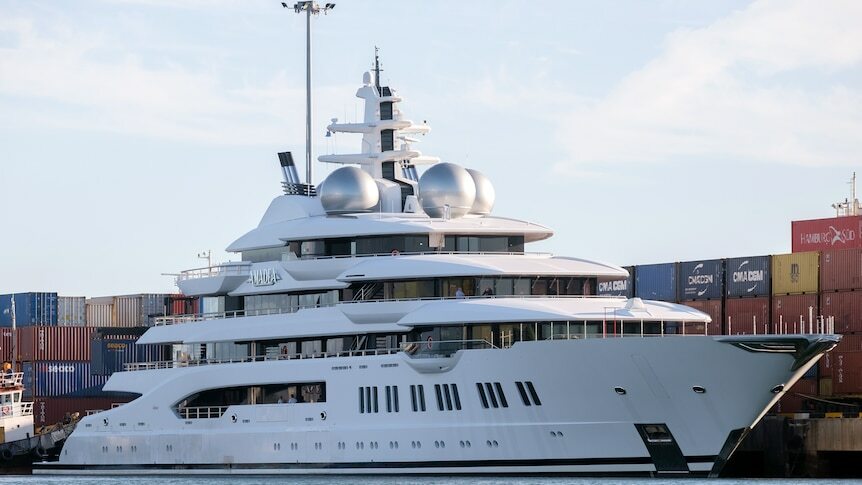 Reuters
A Russian oligarch's $325M superyacht has been seized in Fiji

WEKU
US announces seizure of superyacht owned by Russian oligarch

By Emily Clark with wires

As the FBI boarded the Amadea on Thursday, part of its role was to take an inventory of the superyacht's contents, and investigators were looking for something specific.

And, they say, they found it.

American authorities sanctioned Russian oligarch and politician Sulieman Kerimov in 2018 and have been focused on tracking and seizing the Amadea – a vessel he is believed to own — since Vladimir Putin invaded Ukraine in February.

When US law enforcement finally stepped onto the vessel on Thursday, they found documents that implicate Kerimov in crimes committed in the United States, according to the FBI.

According to the US warrant for seizure, American authorities believe Kerimov has owned the Amadea since 2021.

The FBI said there was "probable cause to believe" Kerimov and those working on his behalf "caused US dollar transactions for the operation and maintenance of the Amadea to be sent through US financial institutions" after he had been sanctioned by the United States.

The Amadea is among some of the biggest private vessels in the world.

It is fitted out with every conceivable luxury, including a swimming pool and helicopter pad, and for the past three weeks it has been moored at a port in the city of Lautoka on the north side of Fiji's main island.

For the Pacific island nation of Fiji, the superyacht's arrival and the legal proceedings around it were unique.

One local law expert told the ABC in his 22 years of practice, he had not seen a case like this – one with such far-reaching geopolitical implications.

A look inside the Amadea

The Amadea has been locked away from the public at a private wharf, behind gates that are guarded by the local port authority.

But the ABC has obtained videos and photos taken onboard the superyacht and the vessel appears to be completely packed up, with furniture under dust covers and cupboards empty.

It is not known whether the Amadea has been stripped as part of the investigation, or if it's empty of personal effects simply because it is rarely used.

But videos and photos taken onboard show an empty swimming pool, wooden furniture wrapped in plastic and cardboard, and lounge chairs covered in protective sheets.

US now responsible for costly upkeep

The Amadea is 106 metres long and is believed to be worth $450 million.

The US took custody of the vessel on Thursday after a High Court judge in Suva ruled a seizure warrant issued in Washington DC could be registered and enforced in Fiji.

That means the US is now responsible for its running and maintenance costs, a figure estimated to be between $25 million and $30 million per year.

"As with any asset seized for federal forfeiture, the cost to seize, maintain and dispose is commensurate with the value of the underlying asset," a spokesperson for the Department of Justice said in a statement.

"When the United States decides to pursue an asset for forfeiture, the costs mentioned above are bore by the Government."

Kerimov is believed to be worth more than $22 billion and, according to the BBC, was beside President Putin as Russian tanks rolled across the border into Ukraine.

He's in Putin's inner circle and is now sanctioned not just by the US, but by the United Kingdom, Europe, Canada and Australia.

The US Justice Department's Taskforce KleptoCapture, as well as the efforts of governments across the West, have focused on seizing yachts and other luxury assets to put the finances of Russian oligarchs under strain.

The hope being that taking their treasures and targeting their personal wealth will ultimately see pressure applied to President Putin over his war in Ukraine.

Elsewhere, the Italian government has seized a yacht worth some $989 million, which has been linked to Mr Putin by some media outlets.

The six-deck Scheherazade has been undergoing repairs in the Italian port of Marina di Carrara since September, but recent activity at the dockside has suggested the crew might be preparing to put the yacht to sea.

The Italian finance ministry said in a statement that investigations showed the owner of the boat had ties to "prominent elements of the Russian government" and with people targeted by European Union sanctions.

Many Russian oligarchs have attempted to move their yachts to Russia to escape US sanctions since March, the FBI said.

The FBI said there was an attempt to prevent the Amadea being seized "almost immediately" after Russian troops entered Ukraine.

The Amadea arrived in Fiji on April 13, after an 18-day voyage from Mexico.

"Amadea turned off its automated information systems (AIS) on February 24, 2022, almost immediately after the start of the Russian invasion of Ukraine," the FBI said.

The vessel's paperwork showed the next destination would be the Philippines, but the FBI believed it was headed to the Russian Pacific port of Vladivostok.

Now under American control, the Department of Justice said "the vessel will be brought to the US and berthed at a port appropriate for the size of the vessel".

However, on Saturday a Fiji court ruled the yacht must remain where it is for now.

The Fiji Court of Appeal ruled that the luxury vessel could not be moved out of the South Pacific island nation until an appeal against the seizure was heard, defence lawyer Feizal Haniff, who is acting for the Amadea's registered owner, Millemarin Investment Ltd, said in an email.

The US embassy in Suva did not immediately respond to a request for comment on the latest court ruling.

On Friday, a High Court judge had denied a request for a stay on the execution of the seizure warrant, but local media reported a fresh application was lodged and granted later in the day.

If the US government does bring the Amadea to American waters and wins forfeiture proceedings, it's likely the superyacht will be sold.

Reuters
A Russian oligarch's $325M superyacht has been seized in Fiji

WEKU
US announces seizure of superyacht owned by Russian oligarch