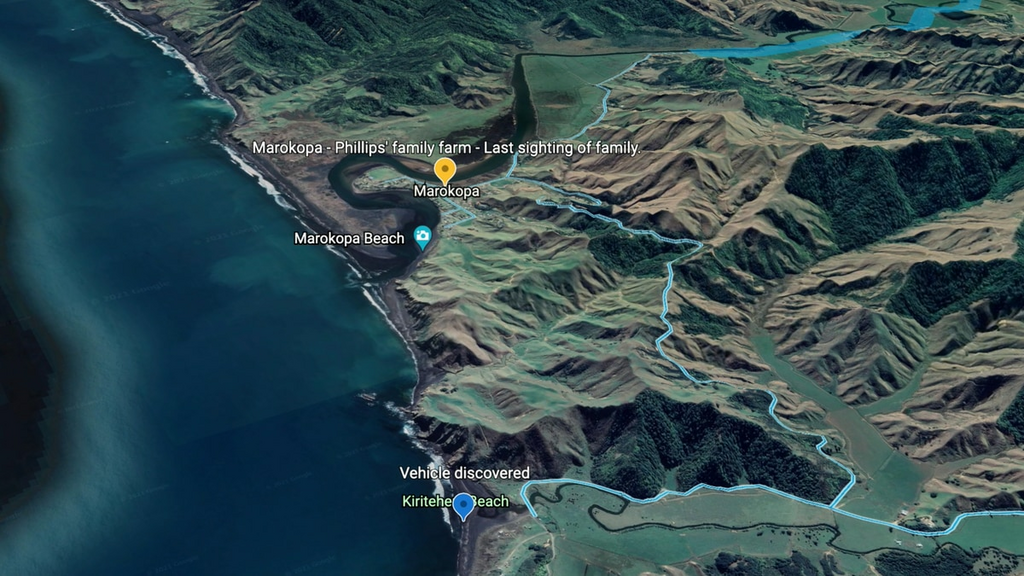 Otorohanga residents are "absolutely devastated" over the disappearance of well-known local man Thomas Phillips and his three young children.

A major search operation is underway to find Thomas Phillips, 34, Jayda Jin, 8, Maverick Callum-Phillips, 6, and Ember Phillips, 5 who were last seen on Saturday at the family farm in Marokopa.

A rahui has been placed on the areas between Tirua Point and Motunau Rocks in the Marokopa and Kiritehere areas - where the family is last thought to have been.

A local businessman said everyone was in total shock and couldn't understand how it could have happened to a local man who was no stranger to the rugged west coast and knew the area so well.

The whole town was "absolutely devastated" and really concerned about what had happened to the family and where they were, he said.

"This is a long-standing family in the community and certainly not strangers to this region."

"As far as talk on the street, there's no talk, only shock. Everybody's in shock - nobody's coming forward with any theories because no one knows which way to go."

Members of the public notified the man's family on Sunday that the grey Toyota Hilux was on the beach and being drenched by waves. The Herald understand the tyres had to be dug out before it was removed off the beach.

Phillips, who was a pig hunter and familiar with the bush, had custody of his three children and shared their time between a house in Otorohanga and the family's Marokopa farm where he helped out.

He has been described as a dedicated father who had been homeschooling the children.

The farm is about a 10-minute drive from Kiritehere beach - where the empty vehicle was discovered.

A Waitomo district resident said no-one seemed to know anything more than what had already been reported and everyone was at a loss as to what could have happened.

Phillips' uncle Paul Phillips told RNZ this morning the family was remaining optimistic and hoping he was just "hiding in the bush" with his kids.

Waikato West area commander Will Loughrin said the current weather conditions had not made it possible for either the Eagle helicopter or the Coastguard NZ fixed-wing plane to begin searching today, but search teams were back scouring the coastline.

Loughrin said police were committed to finding Thomas and his children and bringing them home and would continue to work with and support their extended family.