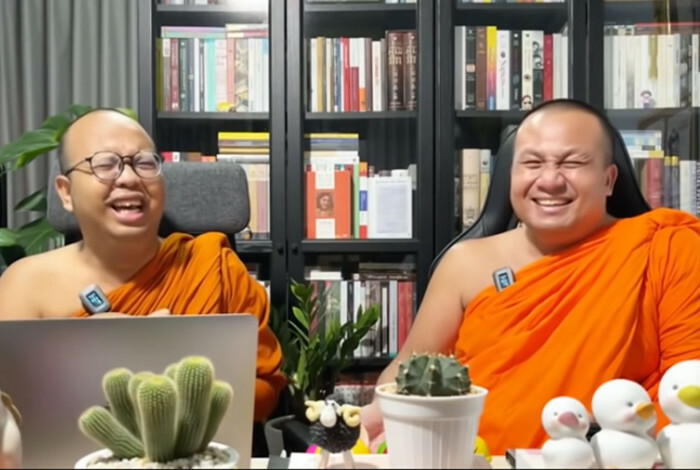 The Supreme Sangha Council (SSC) will decide if two celebrity monks accused of bringing the monkhood into disrepute by appearing to mock the government during a live-streamed event should face punishment, PM’s Office Minister Anucha Nakasai said on Tuesday.

The talk show co-hosted on Facebook by Phra Maha Sompong Talaputto and Phra Maha Praiwan Worawano last weekend is a religious affair, according to the minister. He said it would not be right for him to judge if the two popular preachers violated monkhood rules.

During the talk show, they burst out laughing and made satirical references to the government. They also allegedly solicited donations and asked for a fee to post advertisements on their webpages.

They were heavily criticised for failing to conduct themselves in a manner expected from monks.

Mr Anucha said the talk show has divided both the laypeople and monks. One side praised them for their creative and entertaining approach in imparting dharma to young people.

Others, however, believed the monks were disrespectful and that their alleged involvement in commercial activities were grounds for defrocking.

Phra Maha Praiwan said via social media that the aim of the show was to draw people to religion and deepen their understanding of dharma.

Mr Anucha said it was normal for society to hold different views on contentious issues.

The National Office of Buddhism (NOB) said it was reviewing the live-streamed programme for any violation of the Sangha Act before forwarding its findings to the SSC, the highest Buddhist governing body.

"I'll let the agency [NOB] do its job," the minister said.

Mr Anucha said the SSC would have the final say on any disciplinary action if the council decided to formally investigate the monks.  Religion is one of the country's fundamental pillars and should be kept strictly separate from non-religious issues, he added.

It is within the SSC's authority to rule if there are grounds to accusations that the two monks had ulterior motives in organising the live stream session or using it as a platform to mislead people.

Paiboon Nititawan, a Palang Pracharath Party MP and deputy chairman of the House committee on religion, said he personally thought the two monks had acted inappropriately by hosting the talk programme.

"While in the clergy, they must abide by the rules set by the Sangha," he said.