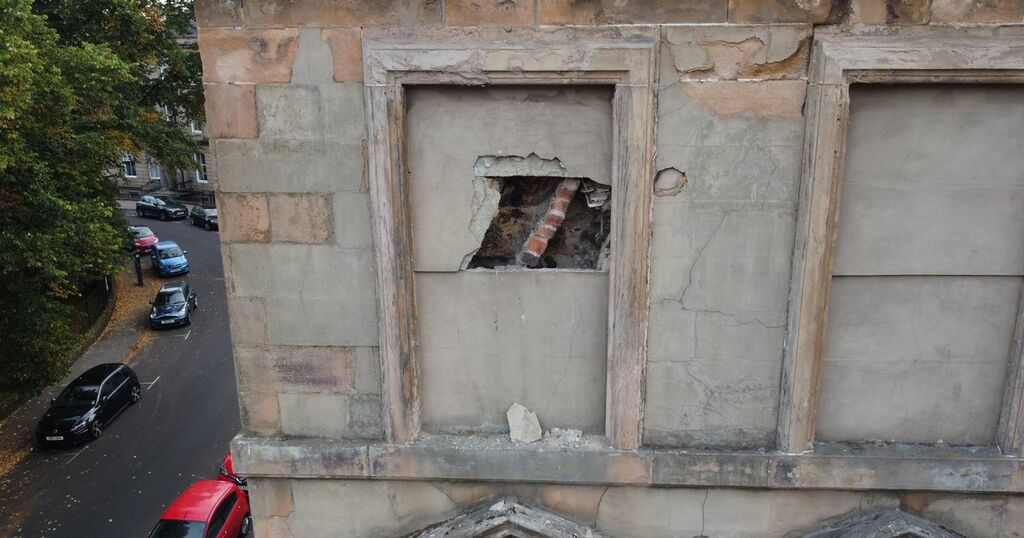 If you've ever wondered what lies behind the so-called 'dummy' windows adorning the exteriors of much of Glasgow's Georgian building stock - look no further.

It's often falsely assumed that windows on the city's most historic townhouses and tenements were blocked up so residents could avoid forking out for an ancient tax.

But, while a 'window tax' was indeed adopted in Scotland in the 18th century, the real reason behind most of the blocked up windows, seen on many older buildings in both Glasgow and Edinburgh, was simply to maintain architectural symmetry.

Now, the ageing 'fake' window belonging to a Georgian townhouse in Glasgow's West End has given up its secrets for free.

A photographic survey of the elegant building, which is in need of repair, has been undertaken by Clarkston-based firm Hisurv Ltd, who took to Twitter this week to share something truly fascinating.

An image of the townhouse reveals exposed chimney flues, which are normally hidden from view - pouring cold water on the age-old 'window tax' myth once and for all.

Mitchell Fotheringham at Hisurv Ltd spoke to Glasgow Live, and told how a pole camera had been used to record the condition of the building's exterior.

Mr Fotheringham said, that while there will have been instances in the past of windows being blocked up to avoid tax levies, it would not have applied in this particular example.

He said: "In the majority of cases, fake windows were added simply to keep the symmetry of the building, and you will usually see the blanked out windows are in line with one another and the chimney stack above them at eaves level.

"Our image nicely portrays the presence of the flues behind the fake window."

Official records show that the cost of the window tax would have been minimal to the deep-pocketed residents inhabiting the townhouses of Glasgow and Edinburgh.

For a start, a house had to have at least seven windows or a rent of at least £5 to be taxed, which meant most of the working class and many of the middle class were exempt.

On the upper end of the scale, it's recorded that the 294 windows of Floors Castle in the Borders cost the Duke of Roxburghe £14 4s in 1748.

The blocking up of windows in Glasgow is said to have been very unlikely, as it would have saved townhouse dwellers only a few shillings a year.

The window tax was finally abolished in 1851, following opposition from health campaigners who condemned it as a "tax on light and air".

It's sometimes claimed that the term "daylight robbery" was coined during the days of the window tax. However, the first recorded use of the phrase did not occur until the 20th century.