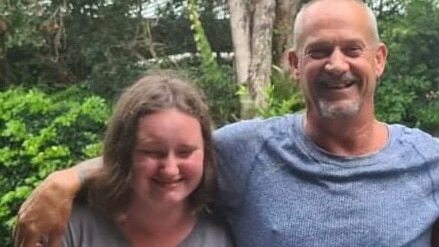 Farmers Ken and Julie Thompson were still awake in the small hours of Saturday morning when they saw car lights in the distance approaching the rising floodwaters near their property west of Maryborough.

They looked on helplessly as the lights disappeared in the distant darkness around 1:30am.

"We were still awake, we couldn't sleep," Ms Thompson said.

"I saw the car lights drive into the water. Then there was no lights. And there was only hazard lights.

The car they saw was being driven by 53-year-old Victorian man Lenny Cain, who was taking his 14-year-old daughter, Krystal, on a holiday to visit relatives in Agnes Water on the Central Queensland coast.

Mr Cain's car was swept into floodwaters near the Thompsons' Booubyjan lucerne property, near Gympie, which recorded up to 650 millimetres of rain on Friday.

The Thompsons have recounted the dramatic rescue of Mr Cain, but are devastated that Krystal has not yet been found despite four days of searching.

'I heard a man screaming'

Around 9am on Saturday morning, Ms Thompson's worst fears were confirmed.

"I heard a man screaming and I yelled out to my husband to come help," she said.

As floodwaters turned her paddocks into a roiling river, she saw Mr Cain clinging to a tree in the distance.

Trapped at their house on the hill, the couple tried to launch a jetski but soon realised it was too dangerous.

"When we saw him in the tree we thought he was safe, he was holding on," Ms Thompson said.

They called emergency services and while they waited for the RACQ CareFlight crew to arrive, they took turns at keeping Mr Cain in sight by using the scope on their rifle.

It took two hours for the rescue helicopter to arrive, as it battled foul weather and rescued more people along the way.

Battle to save father

Lifeflight said they flew more than 10 flood-related rescue missions on Saturday, including rescuing a family from the roof of their home and another family who had sheltered in their car.

"They took two attempts, and they got him on the second, they lowered a man on a cable but he was smacking into the trees on the first time," Mr Thompson said.

"When he got out of the helicopter, he was in shock.

An exhausted and devastated Mr Cain was taken to Bundaberg Hospital for treatment. He has now been discharged from hospital with broken bones and pneumonia.

Emergency services are continuing their search for Krystal, and a Go Fund Me page set up for the family has so far raised $2,700.

"Krystal was a bright soul with the world at her fingertips. She was swept away in flood water in a once-in-a-lifetime flood near Booubyjan, (near Gympie) Queensland," the page says.