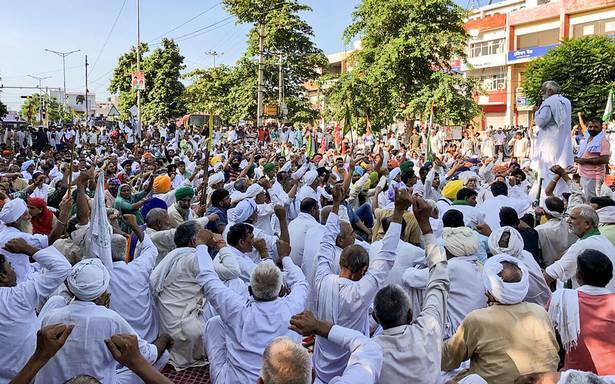 As the stand-off between the protesting farmers and the government continued on Thursday in Haryana’s Karnal, Home Minister Anil Vij said the government was ready to get the entire episode surrounding the August 28 farmers’ protest incident investigated.

It was the farmers’ democratic right to protest while government officials had constant dialogue with them. But only legitimate demands would be accepted, he stated.

“Dialogue is an integral part of any democracy, but only legitimate demands shall be accepted. No one can be hanged just because of the demand of someone without any investigation. Is the country’s IPC [Indian Penal Code] different and farmers’ IPC is different? it can’t be like that. The punishment is given according to the fault. To find out the fault, an investigation has to be done and we are ready to get it probed fairly, but we will get all the Karnal episodes investigated. In the probe if the farmers or their leaders are found to be at fault, then action will be taken against them too,” he told reporters in Ambala.

Mr. Vij’s statement came in the backdrop of farmers’ demand for the immediate suspension and framing of murder charge against the IAS officer, who was at the centre of controversy for his alleged speech surrounding “smash their heads” during the baton charge on protesting farmers in Karnal on August 28. Ayush Sinha, then Sub-Divisional Magistrate (SDM), was seen in a purported video, asking the police to “smash the heads” of the protesters. Later, the government transferred him, posting him as additional secretary, Haryana Citizen Resource Information Department.

Hundreds of farmers associated with the Samyukta Kisan Morcha (SKM), the umbrella body of farmers’ unions spearheading the ongoing farmers’ protests against the Centre’s three farm laws, continued picketing for the third day outside the mini-secretariat at Karnal in support of their demands.

The SKM said in a statement that they were asking the government a very reasonable thing, which is to suspend the official (IAS officer) and order an inquiry against him. “The refusal of the government speaks volumes about where the official’s impunity is emerging from. Yesterday, the talks between the farm leaders and Karnal administration broke down as our demand to take action against Ayush Sinha was again denied,” said the statement, adding that by not taking action against the officer, the government stood exposed as the real master behind the violence against farmers.

Karnal Deputy Commissioner Nishant Kumar Yadav said the matter related to Mr. Sinha was being investigated by the orders of the Chief Secretary and appropriate action would be taken after receiving the report.

“If farmers want to participate in the investigation process, then they will be welcome, or if the farmers want to get the matter investigated at some other level, then that demand can also be accepted,” he said.

The government has extended the suspension of mobile Internet services in Karnal district till Thursday midnight, said an order of the Home Department.

Multiple rounds of talks between farmer leaders and the district administration have failed to break the deadlock.

Farmers and their representatives have made it clear that the protest outside the mini-secretariat would continue till their demands are met.