Jhulan Goswami, a name synonymous with 'fast bowling' in women's cricket, will walk into her cricketing sunset at the Lord's on September 24, 2022, and the Indian team will strive to make it a memorable swansong for her by completing a historic ODI series clean sweep on English soil, at Lords in London.

Playing one game at Lord's is an ultimate dream for a cricketer.

Scoring a hundred or taking a five-for is a different high but bidding adieu to the game following an illustrious career at the 'Mecca of Cricket' is only reserved for a few chosen ones.

Sunil Gavaskar (although he played his last first-class game there) didn't get that opportunity. Neither did Sachin Tendulkar or Brian Lara or Glenn McGrath got that opportunity to step down the stairs of the hallowed Long Room on their final playing day.

But call it destiny or design, Goswami's last hurrah is happening at Lord's.

There couldn't have been a more iconic setting as the strapping 5 feet 11-inch lady walks her way through that Long Room where the MCC's 'suits' will stand up and give her a 'Guard of Honour' and she will enter the ground with her teammates.

A series already won with an unassailable 2-0 lead, Harmanpreet Kaur and her team would leave no stone unturned to make it a fitting farewell for one of the 'poster girls' of Indian cricket.

Having lost the T20I series, India did extremely well against a depleted England side in the two games where they dominated while chasing as well as while setting the target.

If the biggest gain is skipper Harmanpreet getting her touch and free-flowing self back with innings of 74 not out and 143 not out, the worry has been Shafali Verma's patchy form throughout the tour.

Harleen Deol has done well to establish herself as a dependable middle-order batter but with Goswami's retirement, the seam attack comprising Meghna Singh, Renuka Thakur and Pooja Vastrakar would need to step-up a lot more.

As far as England is concerned, the absence of skipper Heather Knight (due to injury) and star all-rounder Nat Sciver (mental health break) impacted the team's balance hugely.

Goswami’s impact then and now

The last time Indian women won an ODI series in England was way back in 1999 when Goswami hadn't made her international debut.

So as she appears for her 204th and last game, Indian team's revered "Jhulu Di" would know that she is a contented soul.

May be an ICC silverware (she had two shots at that in 2005 and 2017 when India played final) would have looked nice but sometimes some things are not meant to be.

When she makes her bowling mark for one last time, and strides up that Lord's slope to add to his 353 international wickets (across formats), she might remember a lot of things.

From a small town Chakdah in remote West Bengal to winning 'ICC Woman Cricketer of The Year' and shouldering the Indian pace attack for 20 years, you can only doff your hat to her.

It wasn't an easy journey to take the first local train to Kolkata and start with routines at North Kolkata's Shradhhananda Park (a small non-descript ground).

Even after her India debut, when she would go back home, from Chakdah station, she would be seen sitting in an open Van Rickshaw.

When she had first played for India, Shafali Verma and Richa Ghosh were not even born and Jemimah Rodrigues was perhaps in her nappies.

Harmanpreet was still a dreamy-eyed Moga girl, who wanted to play cricket.

When she is retiring, Harmanpreet is her captain and Shafali, Jemimah, Richa and Yastika Bhatia are her teammates.

And yes, the IPL for women is about to start, women cricketers have central contracts and most of them are driving Mercedes, BMWs and Audis, with the kind of money that has come in.

She has been a bridge between the struggles of travelling in second class compartments, living in dormitories and youth hostels with common washrooms to business class travels and stay at swanky five-stars with proper central contracts and financial security.

In between, a lot of water has flown through both Hooghly and Thames as she went on her journey undeterred.

The delivery to Meg Lanning in the semi-final of the 2017 World Cup will be one such piece of cricketing action that you would want.

As India aim for a 3-0 clean sweep after a couple of dominant shows, one can assure that there will be no let up in her intensity.

There won't be another Jhulan Goswami. 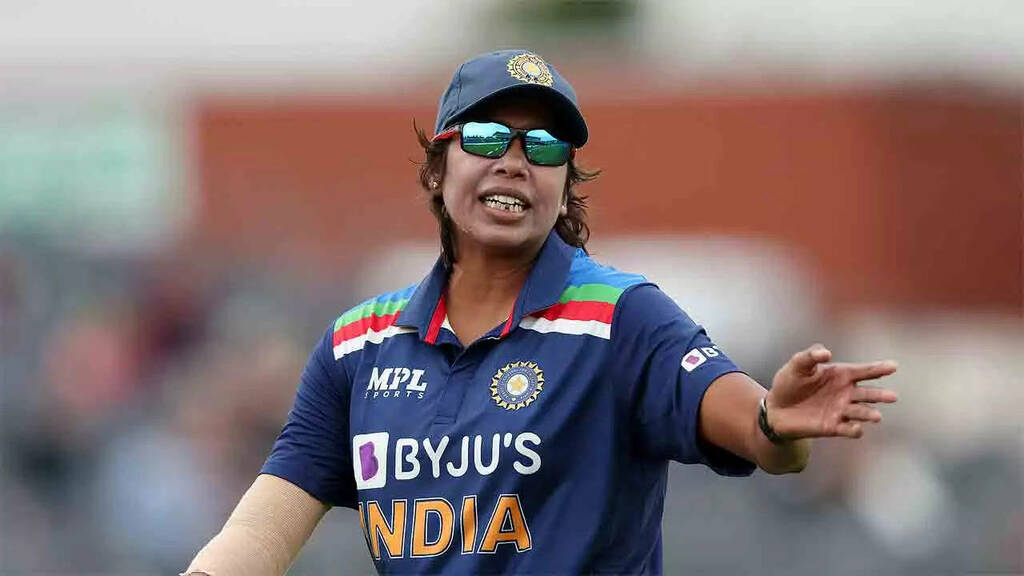 3rd ODI: India eye memorable farewell for Jhulan Goswami at Lord's
LONDON: Jhulan Goswami, a name synonymous with 'fast bowling' in women's cricket, will walk into her cricketing sunset at the Lord's on Saturday and the Indian team will strive to make it a memorable swansong for her by completing a historic ODI series clean sweep on English soil, here.

The Times of India
From analysis to the latest developments in health, read the most diverse news in one place.
England women vs India women third ODI | India records first ever series sweep on England soil

India completed a series whitewash, and said farewell to the great Jhulan Goswami, with a 16-run victory at Lord’s

In 1999, the Indian team had won the ODI series 2-1 with Anjum Chopra striking a hundred and a half-century.

The Hindu
One place to find news on any topic, from hundreds of sites.
India Women vs England Women, 2nd ODI: India to aim for rare series win in England

CANTERBURY: A confident Indian team will back itself to seal its first series victory in England since 1999 with another win over the hosts in the second women's ODI here on Wednesday.