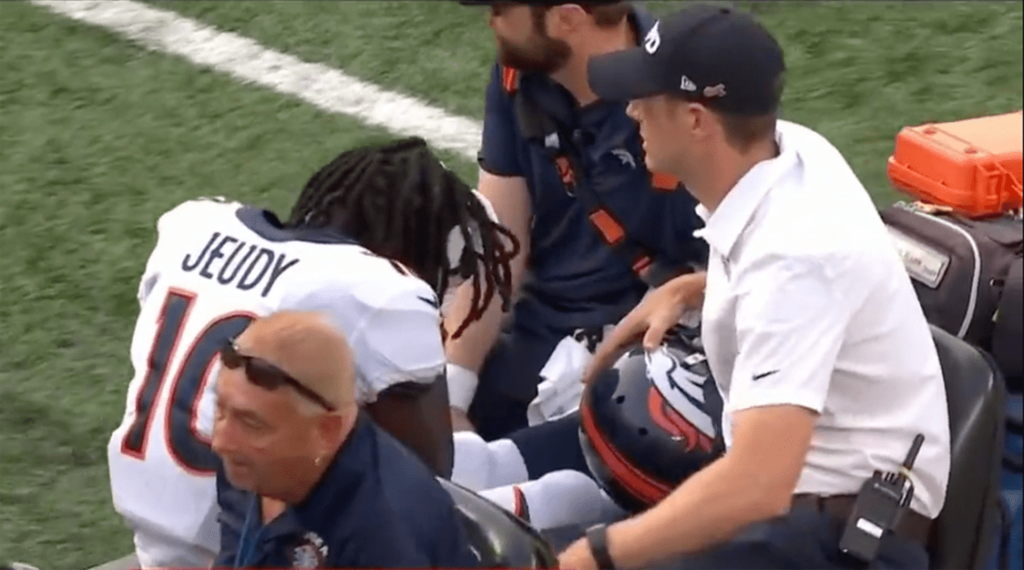 There’s a lot to keep track of on Sundays. Today we saw Urban Meyer’s embarrassing NFL debut, Detroit’s near-comeback against San Francisco and the new-look Seahawks offense slicing up the Colts. And, because this is the NFL, there were plenty of injuries, too.

Here’s a list of the notable ones from today's slate of games.

Quarterback Ryan Fitzpatrick left his Washington debut early after injuring his hip in the second quarter. Fitzpatrick took a massive hit from Chargers linebacker Uchenna Nwosu on an incomplete pass. He was later ruled out and initial reports indicate the veteran passer suffered a hip subluxation.

Taylor Heinicke replaced Fitzpatrick and Washington lost to Los Angeles 20-16. Fitzpatrick was just 3-of-6 for 13 yards when he exited the game. Heinicke fared much better against Los Angeles’ defense than Fitzpatrick, going 11-of-15 for 122 yards and a touchdown to Logan Thomas. He added 17 yards rushing. The Football Team was already without receiver Curtis Samuel (groin) and the offense did not live up to the high expectations that had been put on the team in the offseason.

If Fitzpatrick misses significant time, Heinicke, who threw for 300 yards in the Wild Card Round against the Buccaneers last season, is worth adding in two-quarterback or super-flex leagues. Washington has a short week and plays the Giants Thursday night.

49ers running back Raheem Mostert was already a must-start against Detroit, and his fantasy value seemingly shot up when Trey Sermon was ruled out. But the injury-riddled Mostert left the game early with a knee injury after taking two carries for 20 yards. He was ruled out soon after. Mostert missed eight games in 2020 and 15 across the last four seasons with the 49ers.

But San Francisco’s run game didn’t suffer without Mostert. Elijah Mitchell topped 100 yards on the ground on just 17 carries and the 49ers beat the Lions, 41-33. Mostert will have an MRI tonight, according to multiple reports, but the team does not believe he has an ACL injury. Mitchell will rightfully be a hot target on the waiver wire this week if there’s any indication Mostert’s injury is serious. Sermon may also be thrust into a large role early on in his career if Mostert does time.

Broncos receiver Jerry Jeudy was carted off against the Giants with a gruesome-looking ankle injury. His ankle was caught under a New York defender and twisted the wrong way. Check back on @SI_Fantasy for updates as this is a developing story. Jeudy caught six passes for 72 yards before the injury.

There’s plenty of receiving threats in Denver for Teddy Bridgewater, but Jeudy was poised for a breakout sophomore season.

A knee injury ended Jets left tackle Mekhi Bechton’s day early in New York’s 19-14 loss to Carolina. He was carted off against the Panthers and did not return. The injury occurred in the third quarter on the same play that No. 2 overall pick Zach Wilson threw his first career touchdown to Corey Davis.

According to a report from Ian Rappoport, it appears Bechton has an MCL sprain. He will undergo an MRI.

Browns receiver Odell Beckham Jr. was set to make his return to the field today against the Chiefs but his first game in 2021 will have to wait at least another week. Beckham was ruled out after warmups.

He tore his ACL early in the 2020 season and is easing his way back. According to ESPN’s Adam Schefter, the Browns playmaker didn’t take full reps at practice this week and hasn’t had full contact all summer. The pass-catching duties in Cleveland fall to Jarvis Landry, Donovan Peoples-Jones and Austin Hooper. Beckham could make his return next week at home against the Texans.

Seahawks running back Rashaad Penny left the game against the Colts with a left calf injury and did not return. After the game coach Pete Carroll said Penny’s calf tightened up on him and kept him out as a precaution, according to Seahawks team reporter John Boyle.

Browns left tackle Jedrick Wills Jr. was carted off with an ankle injury against the Chiefs. Wills anchors the elite Browns rushing attack.

Cowboys receiver Michael Gallup was off to a good start against the Buccaneers on Thursday night before exiting with a calf injury. Gallup, Dallas’ talented third option at receiver, had four catches for 36 yards in the game. He did not return.

According to Michael Gehlken of the Dallas Morning News, the injury is a calf strain and the expectation is that Gallup misses three to five weeks. That could lead to even more targets for Amari Cooper and CeeDee Lamb, who both went over 100 yards Thursday.