Fantastic Fest 2021: In Black Comedy ‘Silent Night,’ May All Their Christmases Be Blight 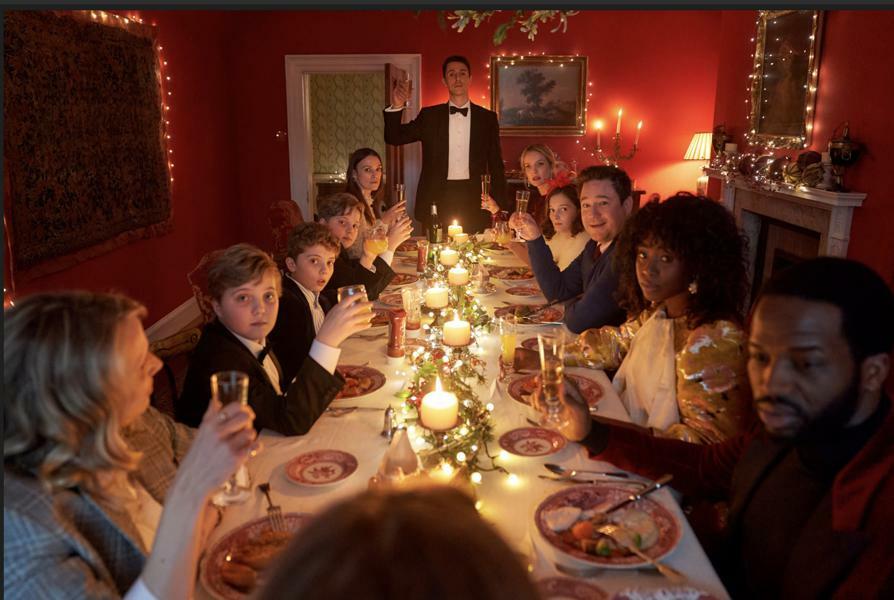 Initially you won’t be able to tell Silent Night apart from any other Christmas story, with the desperate family coming together over the holidays, thinly-veiled tension in the air amongst an oddly beautiful cast. There’s surely something in the air and it’s a little hard to pin… but this pitch-black comedy has a lot more in store for its family than typical holiday merriment.

Nell (Kiera Knightley) and Simon (Matthew Goode) are hosting a number of friends a their lovely England country home, including James (Ṣọpẹ Dìrísù) and his American girlfriend Sophie (Lily-Rose Depp), the tense Sandra (Annabella Wallis), her husband Tony (Rufus Jones), and their child Kitty (Davida McKenzie), Bella (Lucy Punch) and her girlfriend Alex (Kirby Howell-Baptiste), and then of course Nell and Simon’s children Art (Roman Griffin Davis) and his twin brothers Thomas and Hardy (Gilby Griffin Davis and Hardy Griffin Davis). It’s a cavalcade of characters, with the adults of the group mostly knowing each other from earlier days while Sophie and Alex cause tension as the group’s outsiders. And there’s a lot—a LOT of tension, for many more reasons than your standard Christmas stresses.

Writer-director Camile Griffin manages to land a stellar cast across the board, boasting a tremendous balance of comedic abilities and acting chops that really land the film’s complicated tone overall. (It should also be noted that Roman Griffin Davis, Gilby Griffin Davis, and Hardy Griffin Davis are the director’s own children). The cinematography and production design land, the dialogue works on multiple levels, and the film’s central story gradually unfolds in a strong, well paced way. The script overall is a real strength of the piece, and it’s repeatedly brought home by its talented cast.

The real story, the true source of the parade of bleakness, won’t be spoiled here, but it’s certainly a surprise for the unexpecting viewer. When the story starts to pivot—and it’s one of those moments where it feels sudden but so many signs were there—it spirals into a divisive trajectory that’s definitely a love-it-or-hate-it journey. It’s well made, adeptly written, and stunningly performed, but it’s a solid, bottom-of-your-being bleak journey that truthfully isn’t for everyone. The bleakness is undercut with occasional (and skillful) moments of broken tension (a particular favorite involves Matthew Goode in a hallway and only we can see him—it’s flawlessly executed), but it’s surely not for the faint of heart. If bleak black comedy is your thing, however, especially when juxtaposed against a setup that screams ‘standard family holiday film’ then this film is exactly and precisely your cup of rhetorical British tea.

Black comedy complexity aside, Silent Night is an exceptional outing for writer-director Camille Griffin. It exhibits confidence that skill that you wouldn’t expect from a debut feature, but here we are—the directorial vision is well executed, the writing is skillful on a very difficult outing to land, and the performances are precise across the board. While it is certainly a bleak cinematic outing, the basic concept works quite well, the tonal evolution and balancing act are handled well, and its definitely something worth watching for the black comedy crowd. This reviewer’s recommendation? If that sort of thing sounds like your speed, it likely is… give it a try. Gather with your loved ones over the holidays, tell them nothing, and pop the movie on—it works well on its own, but best with an unexpecting crowd.

Silent Night will be released on December 3rd, 2021.