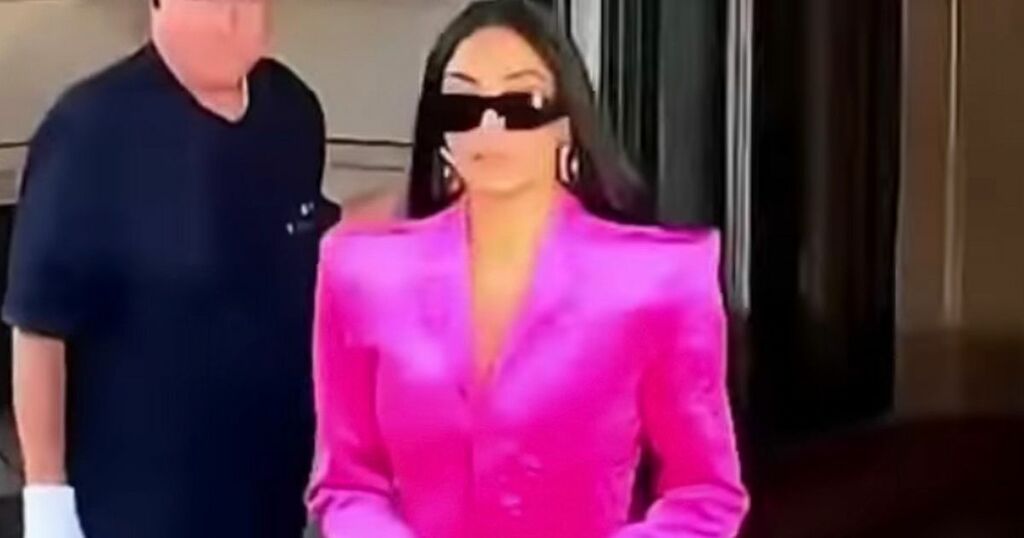 Kim Kardashian has sparked rumours she is using a body double once again.

The global star has confessed in the past that she has used models with her exact proportions and body measurements when trying out new outfits and looks.

Following a sighting earlier this week, fans are now speculating that mum-of-four may be using her body doubles for more than just fashion projects.

In a short clip shared on social media, the woman believed to be the 40-year-old reality TV star can be seen leaving a hotel in New York City ahead of her appearance on Saturday Night Live this weekend.

Posted to Instagram by a Kardashian fan page, the brief clip of the star shows the glamorous TV personality wearing an all-black ensemble and dark shades to hide her eyes from the waiting paps.

"Okayyy, Kimberly is currently in NYC and she's serving looks!" the Instagram account captioned the new footage of the star.

However, not everyone believes that the woman in the video serving looks is actually the real Kimberly.

"That ain't her?" one Instagram user commented underneath the video.

Another questioned: "Is that even Kim? She looks like a whole different person."

A third eagle-eyed fan spotted that the woman in the video appears to have slightly different features to the Kim the world knows and loves.

"Not the same eyebrows. Can’t be her lol," the poster claimed under the clip.

"No way that’s her. I feel like she’s using a[n] impersonator," another suspicious fan mused on Thursday.

Back in 2016, Kim revealed that when she wore clothes from her now-estranged husband Kanye West 's clothing line, the Yeezy branded looks had already been workshopped on models with her exact measurement prior to the star trying things on.

"There are fit models — we have gotten people who have my exact same measurements — and they try on all the clothes, photograph it, do the fittings for hours every day of all the different Yeezy looks," the 40-year-old told PEOPLE magazine.

"At one point I sent over my entire closet to my husband's office, I had full-time security because I was so nervous. But that was just to photograph it with the fit models there and put looks together," she added.

"There were all these stylists using my clothes, taking pictures and then sending it to me and then whatever I like I'll try it on and make sure it looks good on me. They make my life so easy!"

It was later revealed that during the trainee lawyer's 2016 pregnancy with daughter North West, models strapped on a fake belly when trying on her future fits.

"She has a body double. She has somebody come over here and put a prosthesis on like a pregnant person, and she makes them try on all of her clothes because she's too tired to do it," Kris Jenner told Kourtney Kardashian during an episode of Keeping Up with the Kardashians.

Kim is set to make her debut hosting gig on Saturday Night Live this weekend - a job she has joked will be "so easy" in a preview clip for the show.

In a first-look video posted to Instagram on Thursday, the star can be heard saying: "Hi, I'm Kim Kardashian West, and I'm hosting SNL this week with Halsey."

The reality TV icon then goes on to joke with the singer about the work involved as host.

"No, there are cue cards," Halsey replies.

"This is so easy," Kim jokes during the teaser clip.