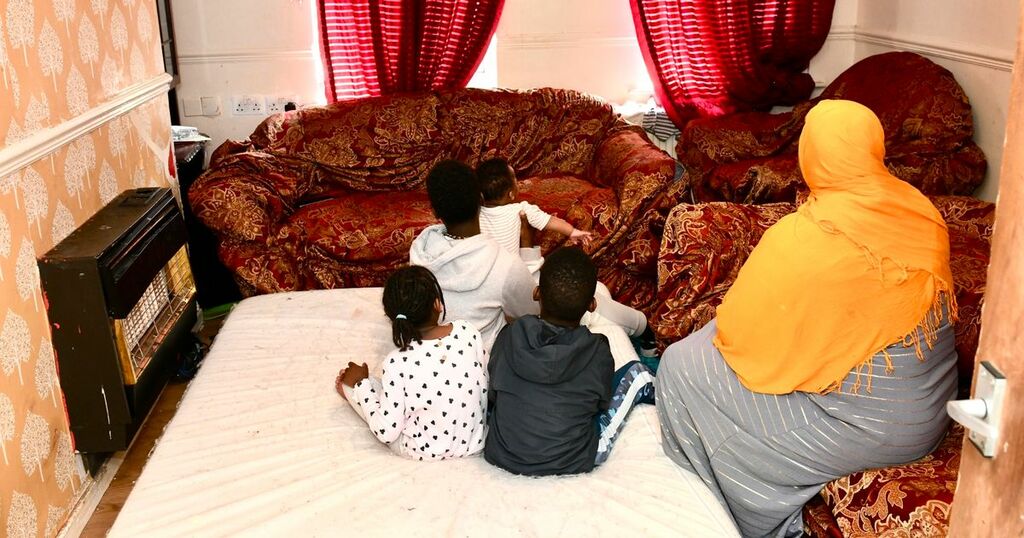 The UK Government has been accused of failing to protect people from inflationary pressures and rising energy bills.

A family of six say they are forced to sleep in one room together because of the state of their mice-infested council flat. The property is riddled with damp and mice appear from "random holes".

Mum Falhado Eders, 32, lost a baby boy during childbirth last year and claims that the family's living conditions may have contributed to the tragedy. The family - Falhado, her husband and four children Yussuf, 12, Leben, seven, Yasmin, five and baby Qaseeda, seven months - live in one bedroom because others room are not fit to sleep in.

Falhado told HullLive: “It is just a nightmare. I try to keep the flat clean, but it is just impossible. I get so afraid the mice will bite my baby at night."

Hull City Council has said it would contact the family about any new maintenance in the flat. It has told them that it charges for rodent infestation work. A spokesperson said the council was helping Ms Eders try to find a new home.

However, the council also acknowledged she had failed in five bids for improved council housing. The family has been in Hull for nine years, having moved from war-torn Somalia. Because of the risk to their lives back in Africa, they have indefinite leave to remain in the UK.

Falhado said: “The situation in Somalia is very difficult and dangerous, there is no safe life there and we wanted to build a safe stable future for our kids here in Hull.”

She said when the family first moved into the flat in New George Street it did not seem so bad, but after a few months everything went downhill. Falhado said: “At first all the damp started to come through the walls and then mice started appearing from random holes around the flat. It was just disgusting.”

When Hull Live visited the property after being alerted by a concerned neighbour, it found the flat filled with mice holes and droppings. “Mice are just running around everywhere,” said son Yussuf. “We have tried to put mice traps, but there are too many of them. We even found them on our bed.”

The family of six has no other choice but to sleep in the living room on a mattress, as it is the only room they say they can get some sleep. Falhaldo said: “Me and my kids cannot breathe in the bedroom as the damp is everywhere. My son Yussuf now has breathing issues and constantly feels itchy. He has a report from the doctor proving this.

"Me and my children don’t get fresh air - it would be better if we slept outside, at least we wouldn’t have to breathe this dirt in. We have not slept well in a long time and it breaks my heart to see my kids suffering like this. I keep ringing social services, but they just don’t seem to care.

Falhado claims that her bathroom leaks around four to five times a week and she has called the council many times to resolve the issue: "The council came once to look at the leak, then they told me if the leaking has stopped on its own then we don’t need to send someone to fix it, so we haven’t had anyone to help us since then."

The leaks have affected the flat downstairs and the neighbour has also complained to the council repeatedly and claims the issue has still not been resolved. The kitchen also has mice with a number of holes which they use to come into the flat from cavity walls.

Falhado says she has no option but to continue using the kitchen and makes many dishes for her children. She said: “I don’t want my children to feel left out; I cook everything for them and we eat on the floor in the living room.”

Falhado lost her baby boy at Hull Royal Infirmary last year. The baby died within minutes in his mother’s arms.

She said: “I am still heartbroken and coming back to this flat has really affected mine and my children’s mental health as well as our actual health. We just want to move on.

"This flat is really not safe for anyone to live. I am certain that I lost my baby because of this flat; I was so ill during my pregnancy it was a nightmare.

“During my pregnancy at the end of 2020 and in 2021 I had developed breathing problems and it was clearly from the damp in the property. The flat was definitely not a safe hygienic place to be in for a pregnant woman. I had been to the doctors several times complaining about my breathing and even my midwife asked me why I am constantly sneezing.’

Her son Yussuf said: “I was really looking forward to having a little brother and I feel sad that we lost him.”

Yussuf spends most of his time playing on his X-box at home. Although he likes the neighbourhood and enjoys playing out with his friends, he would prefer to live in a better house where they can move around.

He said: “My little sister has started crawling and she keeps going near the mice holes - it is really dangerous. We keep all the toys in a cupboard because we know mice have probably nibbled on them.”

The younger children have become so used to the mice they think of them as part of the family. The mother said she had been in regular contact with social services pleading for help, however she claims she has made no progress in finding improved accommodation.

She says, as she has difficulty with English, she had asked for a translator - but none was provided. They are also having problems accessing forms to try to progress their applications.

Yussuf said: “How can we bid for a house? We don’t have a computer to access the site and my parents' English is not that good and nobody will help us. We just want a nice house to live in with no damp and no mice.”

A spokesperson for Hull City Council said it had no record of any requests for assistance for leaks in the property, but had visited in January last year to treat damp with a “fungal wash”.

The spokesperson added: “No further repairs were identified. Consequently, we are contacting the tenant to arrange an appointment for contractors to attend. The only 'live' request we have for repairs is for our contractor to look at cold draughts coming through the front door and an appointment has already been arranged for May 17.”

The spokesperson said they had one report of mice droppings in 2017, adding: “It was explained to her that the Council charged to resolve rodent infestation problems and advice was given about how she could resolve the issue herself.

“With regard to moving to a larger house, (the tenant) is on our Assisted Bid list, which means that the Homesearch team helps her to submit her bids. Since December 2021, she has requested bids on just five properties, none of which were successful.

“The Homesearch team has tried to get in touch with her several times by phone and letter to encourage her to engage with them about her housing situation and so they can support her further with the bidding process.”

Katie PughHull City Council
Sign up to read this article

The UK Government has been accused of failing to protect people from inflationary pressures and rising energy bills.