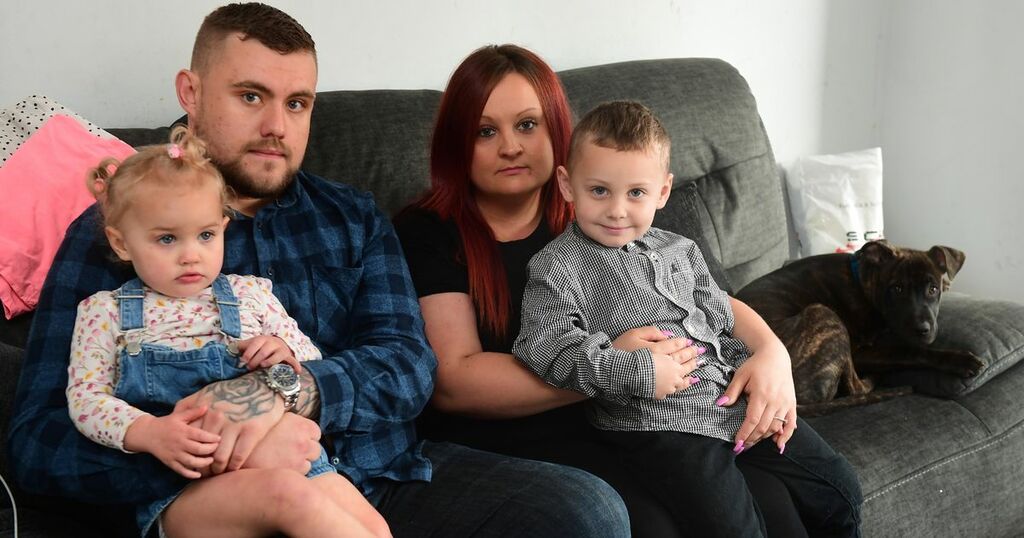 A family who moved 60 miles for a fresh start have branded their new home an "absolute shambles".

Sophie Taylor and her partner James Waite, both 25, arrived with their children Ruby, two, and Thomas, four, at their two-bedroom home in Cheadle, Staffordshire in June.

They previously lived in a flat in Worcestershire and moved to the Sanctuary Housing property so James - who suffers with poor mental health - could enjoy the outside space.

But rather than finding a happy home, the family were faced with a catalogue of complaints, including missing bins, an unlevel garden, holes in the drive, and a "condemned" garage.

Sophie told Stoke on Trent Live: “We wanted a bigger house and a new beginning somewhere.

Do you have a story that you think we should cover? Get in touch with us at webnews@mirror.co.uk


“At the time we were elated we were moving in. When we moved in the property needed decorating. The grass was 6ft high in the garden.

“We moved here on the basis of having a garden for outdoor space for my partner. Due to his disability we needed a lot of space.

“But we can’t use the garden at all. It’s so unlevel and there are holes in the ground.

"We’ve been told that the garage has been condemned because it’s so lopsided that it needs to be knocked down and rebuilt again.

“The concrete at the back of the garden and the driveway is full of cracks and holes. It’s five-inch deep holes, it’s disgusting.

“The front lawn and everything needs redoing. The brick wall at the front is falling down.

“The whole structure of the house needs to be done.”

Sophie says she expects compensation and a bigger property for the issues the young family had to deal with.

She also wants repairs to be carried, which are estimated to run to £17,000.

Sophie, a housing officer, added: “My children can’t go out in the garden. It’s disgusting. I want to move now.

"The neighbours are making comments about how horrible the house looks.

“Everyone else’s houses look really nice and then you’ve got this house which is an absolute shambles. The only thing I can use my garden for is putting the washing on a line.

“I had the six-week holiday with the kids and I had to stay in the house or take them out because I can’t use the garden.

“What I would like out of all of this is a usable house that is a three-bedroom. I want compensation for all the inconveniences because we’ve had to live here from June to now and nothing has been done.

“They are telling me they are sending people out to me and they don’t.

"This has had a detrimental effect on the health of us both.

“I’m trying to manage and maintain a whole house and everybody’s health.

“I am ringing up everyday and being passed from pillar to post. I’ve threatened them with court action and have got a solicitor. I am sick of ringing up and hearing my own voice over and over again.

Sanctuary Housing said it wanted to 'reach an agreement' with Miss Taylor.

A spokesman for the housing association said: “We are committed to carrying out further maintenance at this property and our external contractor has visited to assess the work that is required.

“We would like to reach an agreement with Miss Taylor about this work and will continue to discuss it with her so it can be started as soon as possible.”