By The Business presenter Alicia Barry 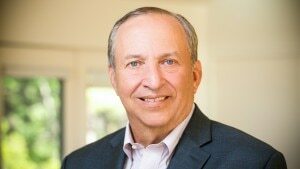 Former US Treasury secretary and Harvard economics professor Larry Summers is worried the US economy could overheat and see prices spiral out of control, drawing parallels to the late 1960s.

Such a sustained prices breakout in the world's biggest economy would have spillover effects for inflation and interest rates across the rest of the world.

"Certainly markets are still expecting that I'm going to turn out to be wrong," Professor Summers told The Business ahead of the Citi investment conference.

"But my sense is that the preponderance of risk is very much on the side of overheating."

Inflation in the US is running at more than 5 per cent, on an annual basis, while the jobs market there is plagued by growing worker shortages and supply bottlenecks.

On top of that, an energy crunch is already dramatically driving up natural gas, oil and coal prices.

"What has surprised me is how tight the labour market has become and how fast [it happened], how many supply-side bottlenecks have returned, and how rapidly inflation has accelerated," Professor Summers said.

He said there was "a gathering storm of inflation".

Back to future on inflation

Mr Summers said the price pressures he saw mounting in the economy reminded him of the late 1960s, when inflation shot up drastically from below 2 per cent to more than 6 per cent, even before major supply constraints were evident.

"We saw inflation move from having a one handle in 1966, to having a six handle by 1969," Professor Summers said.

The late 1960s preceded the OPEC oil embargo in the early 1970s (1973-74), where the oil-producing cartel cut supplies, causing even greater price shocks and sending spiraling inflation on a collision course with central banks.

As a result, there was a period of so-called "stagflation", where economies stalled into recessions at the same time as prices kept rising quickly and central banks felt compelled to keep interest rates high.

Professor Summers said he was crossing his fingers that a more positive outcome prevailed and that the inflation being recorded now was transitory and started to ease, with the US economy cooling enough to avoid large interest rate rises.

However, he said, he was not confident that a "Goldilocks" scenario was likely, and feared that it might take more interest rate rises than most people expected to cool an overheating US economy, despite very large debt levels for some sectors.

"I suspect, for a variety of reasons, we have a less interest-rate sensitive economy than we once did," he said.

"I think we're looking at a pretty unstable financial environment."