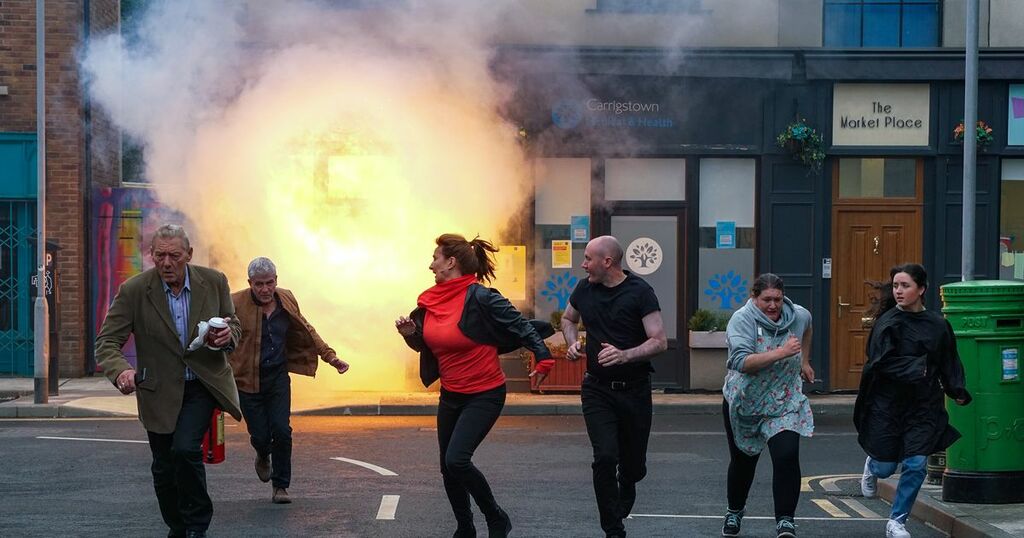 A television extra who was hired to work in Fair City was given an explosive role in a shocking new storyline.

Jack Swift was told by producers they wanted him to petrol bomb Carol Foley’s taxi business which would endanger the lives of some of the soap’s most beloved characters.

The 20-year-old said he couldn’t believe his luck at playing such an important part in the drama.

The storyline explodes into action on Thursday when gang boss Ritchie decides to strike back at the Carol’s Cab’s boss for interfering in his drug business. He has forced Tommy’s son Zak to work for him and he is not happy when Carol, played by Aisling O’Neill, stands up to him.

The gangster hires a young thug, played by Jack, to hurl a Molotov
cocktail through the window of her offices as a warning.

The place goes up in flames and a giant explosion rips through Carrigstown with show regulars Carol, Leo and Tommy having to flee for their lives.

And the drama does not end there.

Dolores, played by Martina Stanley, is driving past as the blast ignites and she hits a skip with her car bursting into flames. Tommy has to risk his life to rescue her. The fictional Dublin suburb has not seen action like it for years and newcomer Jack said he was thrilled to be part of the action.

“I thought I would be just walking past a camera or miming so I was delighted. I was shocked because it was so unexpected but I loved it.”

Fair City stars said they were thrilled with the return of such a big storyline after the coronavirus pandemic closed the set down for several months last year.

Actress Aisling O’Neill, who has played Carol since 1999, was relishing being in the thick of the action. She added: “It’s really exciting and I love it. I’ve had some great storylines in the past but something as dramatic as this hasn’t happened in a long time, especially with Covid.

“It’s really great to feel we are getting back into the swing of things and getting some real excitement back into Carrigstown. It just feels like the good old days are back. I can feel all that camaraderie in the last couple
of days.

“All the prop guys, the actors coming in, people you haven’t seen for a while and even people from other departments coming down to have a look.

“There are lots of twists and turns coming and Carol does not want to get pulled in.

“She has lived this life and closed the door on it a long time ago. She lost her son to street violence and gangs.

“But she cares about people so when she sees someone getting sucked in she finds herself trying to help.”

One twist in the drama will be the return of a much-hated character who disappeared 10 years ago – Lucy, who made Dolores’s life a misery.

The tough-talking character turns out to be the insurance assessor
who comes to view the burnt out property.

Brigie said: “We had to get all the right people in place and we’re bringing back a character.

“It’s going to kick off in a totally different direction which is completely unexpected so it took about 12 months’ planning.

“It’s been very difficult with Covid but it’s an amazing team and their willingness to keep us on our feet has just been phenomenal. The pandemic has impacted everyone and all our systems of working, from handling props, standing apart, not being able to have extras. Simple things.

“They can’t even share dressing rooms any more so we have to reduce the number of actors. And that
obviously impacts the story.” Brigie said she was bowled over watching the explosive scenes planned by special effects company Team FX and Total Stunts.

She added: “Their attention to detail is amazing. They really know what they are doing. The fire brigade, who were on standby, say they have never seen such safety and were astonished.

“We had an extraordinary woman stunt driver who was braced in and there was a real crash and a big ball of fire.

“It was stunning. It takes a long time, two cars and a lot of work but it looks fabulous.

“And audiences love a big explosion. But the storyline that comes after it is the main thing and it’s a humdinger.” Jason Branagan, who directed this week’s episodes, said: “There is a lot of planning for action of this scale. It’s super exciting.

“You can only crash a car once so you have to make sure all the cameras are in the right place. But Team FX and Total Stunts are phenomenal at what they do.

“You have to let them do what they do best and I make sure I do my part by covering it all properly with four cameras and a GoPro.”

He said the stunt work took two days to film but it would probably only amount to about 30 seconds of footage. Jason added: “I’ve been on the show for two and a half years but this is the biggest storyline for me by far. Everyone digs a little deeper when you get to do big things like this.”

Dublin fire officers volunteered to be on set for the sequences.

David Connolly, of Kilbarrack fire station, said: “It’s great to see what happens behind the scenes.

Colleague Maria Partridge, from Swords station in North Co Dublin, said: “It’s exciting to see these people and you think you know them.”