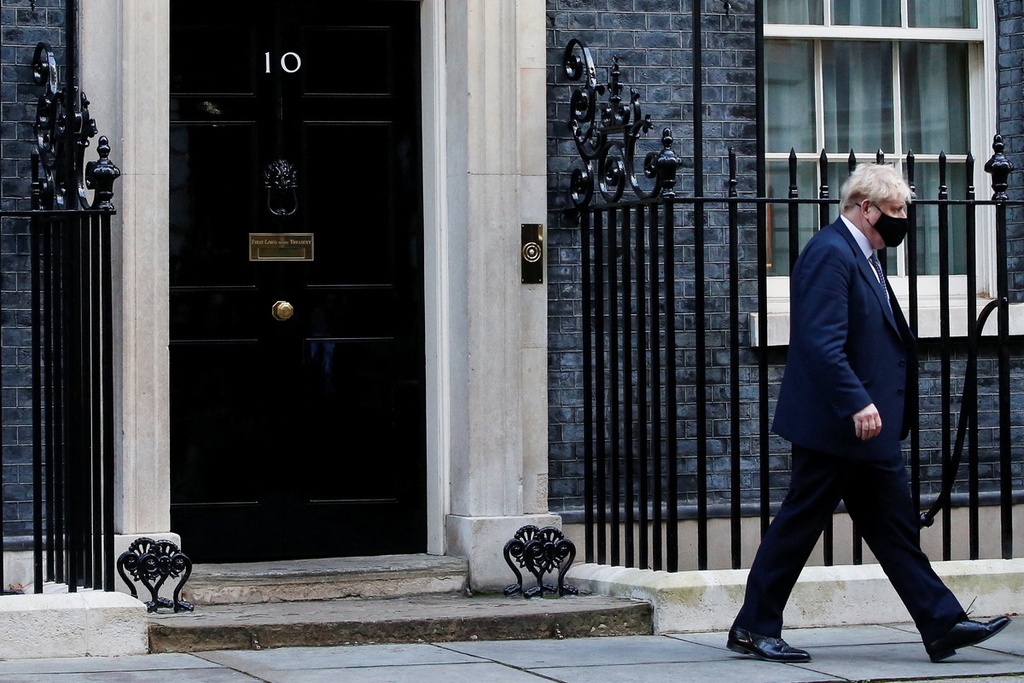 British Prime Minister Boris Johnson's leadership credentials have been badly tarnished by controversies and missteps in recent months, leading to warnings from some of his lawmakers that he must sharpen up or face a challenge.

Below are some of the troubles Johnson has faced:

Conservative lawmaker and former senior minister Owen Paterson faces being suspended from parliament for 30 days after parliament's standards committee found he had committed an "egregious case of paid advocacy".

Johnson's Conservatives are accused of corruption after they voted to halt Paterson's suspension and forced through an overhaul of the process of investigating lawmakers.

After unhappiness in his own party and newspaper headlines accusing Johnson's administration of sleaze, or self-serving dishonesty, the government makes a U-turn on the plans it had pushed through a day earlier and Paterson quits parliament.

Johnson loses his place during a speech and instead regales business leaders with an anecdote about his recent visit to a Peppa Pig children's theme park, prompting some to raise concerns about his leadership.

The Mirror newspaper publishes what becomes the first of many media reports about Christmas parties taking place in government offices, including Johnson's own Downing Street office, in December 2020, when such gatherings were banned because of a coronavirus lockdown.

Other media reports in the following weeks include a photo of Johnson hosting an online Christmas quiz for his staff, seated alongside an official draped in tinsel.

Hours after Johnson tells journalists he is satisfied that no COVID lockdown restrictions were broken, ITV publishes a leaked video showing his staff laughing and joking during a mock news conference over how to explain a gathering in Downing Street.

Johnson apologises for the video, saying he is furious about it. Allegra Stratton, most recently Johnson's COP26 spokeswoman but his press secretary at the time the mock news conference was filmed, resigns.

The Conservatives are fined 17,800 pounds ($23,500) by the electoral watchdog for failing to accurately report a donation that helped fund the refurbishment of Johnson's official residence.

The fine reopens questions about who paid for the work, estimated by some media to have run into hundreds of thousands of pounds, and Johnson's knowledge of the donation.

More than 100 of Johnson's Conservative lawmakers vote against new coronavirus restrictions, dealing a blow to his authority and raising more questions about his leadership.

Johnson's Conservatives suffer a huge swing in allegiance to lose an election to fill Paterson's vacant seat, substantiating fears among some that the party's reputation and electoral prospects are suffering under Johnson. He says he takes personal responsibility for the loss.

Britain's top civil servant, Simon Case, steps down from leading an investigation into alleged parties in government offices after it is reported an event was held in his own office.

Brexit minister David Frost, an architect of Johnson's tumultuous Brexit strategy, resigns, saying he is disillusioned with the direction of Johnson's government.

The Guardian newspaper publishes a photograph of Johnson and more than a dozen other people drinking wine in the garden of his Downing Street residence that it said was taken during a COVID-19 lockdown in May 2020.

Johnson tells parliament he attended a gathering in the Downing Street garden on May 20, 2020, during a national lockdown. He says he implicitly believed it to be a work event, apologises and says he understands the public anger.

Broadcaster ITV say the event was organised by a senior aide who signed off an invitation email "bring your own booze".