However, there are some other changes – both big and small – that differentiate it from the car that was last rolled out in Miami.

First up, the team has introduced a new rear wing configuration, with an onus on increasing downforce for the challenges posed by both the Circuit de Barcelona-Catalunya and Monaco that the wings already at its disposal wouldn’t have resolved.

The design is most closely aligned to the one used in Bahrain, with the elements filling up more of the legality box and being angled more steeply too.

The team has also used different downforce offerings at the other circuits, with a spoon-shaped design to help reduce downforce and drag was deployed at both Jeddah and Miami, and a more conventional shape was favoured in Imola.

There have also been several changes to the halo and its fairing, not least the change from green paint in the front section to black instead, which begs the question as to why it didn’t choose to save even more weight and just leave it carbonfibre.

The team also mounted a new pair of fins on the rear upper section of the halo for FP1 that they removed during the session (red arrow), whilst another fin has been added ahead of the rear mounting (blue arrow), which is likely an improvement based on the side-mounted winglet that’s been taken on and off the car during the first few races (purple arrow).

Moving down the car, the first elements that we come across that bear all the hallmarks of the Red Bull RB18 design philosophy is Aston Martin’s switch to the twin outer floor strake layout that, until now, had been individual to Red Bull.

Aside from them being stacked next to one another they also feature a stepped design ahead of the transition into the floor, which should produce vortices that interact with one another and increase performance locally and downstream.

By far the biggest change made by Aston Martin in Spain is the sidepods, as it becomes the first team to make a U-turn and produce something similar to another challenger in a quest for more performance.

The challenges posed by such an undertaking should not be underestimated either, as it has not only required an aerodynamic rethink of the external surfaces but also adaptation of the internal layout of the heat exchangers, electronics and ancillaries housed within the sidepods.

In its original guise the AMR22’s sidepod internals (inset) were much more reclined, which resulted in the ‘hanging’ sidepod bodywork solution that provided a large undercut for the airflow to make an unobstructed journey along the car’s flank.

In order to better manage the airflow at the rear of the car, the designers also incorporated large cooling gills on the sidepod’s upper surface.

The new configuration largely does away with this arrangement, as the internal components have been reoriented, with the heat exchangers inclined so they take up a more conventional position within.

As a consequence the inlet has also been pushed back, which the team hopes will still provide the necessary flow to cool the internals but also influence the external airflow more effectively too.

This is aided by the team's approach to the shape of the bodywork that surrounds the inlet, with the overall design clearly influenced by the Red Bull RB18 but requiring its own take in order to extract the performance it is looking for. For example, the RB18 has an extended lip ahead of the inlet, which creates an open top, increasing the volume of air that can be captured – but the AMR22’s version does not.

The shoulder of the sidepod also has more of a bluff surface than its Red Bull counterpart, as the Aston designers look for their own way in which to push the tyre wake laterally that it encounters.

There is some similarity in the design of the wing mirror housing, the stalks and the ancillary winglets that grow from them. But whereas the RB18’s wing mirror sits astride the outer sidepod boundary winglet, the AMR22’s does not – it remains independent of it.

The large forward undercut and Z-shaped downwash contouring seen on Red Bull’s sidepods is also present on the Aston Martin which bleeds into another region where we can now see similarities between the two: the floor edge.

Aston Martin had already deployed an edge wing at the more central point of the floor but it has been transformed to align with the sidepods’ new, wider waistline and features a slot ahead of a wavy section before the floor tapers away ahead of the rear tyre.

It’s also worth noting that while much of the heat rejection duty now falls on the enlarged rear cooling outlet, the team still has the option to open up cooling on the side of the car, with a similar design to the Red Bull employed here once again.

Just as Red Bull has done, there are also options of how much of those cooling gills needs to be opened up in order that aerodynamic performance isn’t compromised. 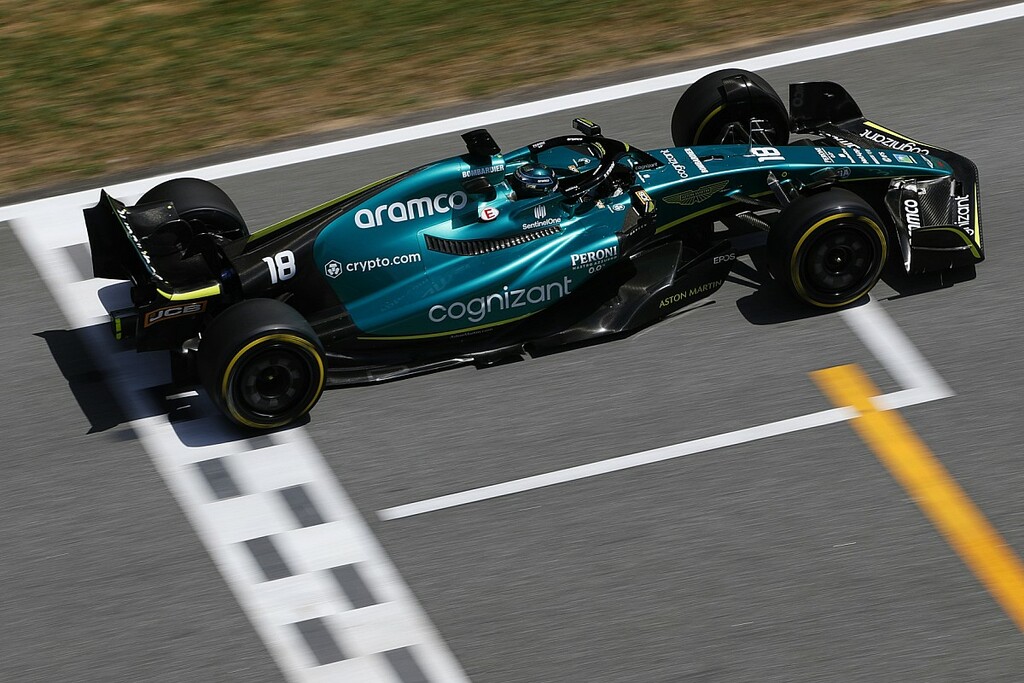 Autosport
One subscription that gives you access to news from hundreds of sites
Spanish GP: Latest F1 technical images from Barcelona