Charles Leclerc pulled out a scintillating final lap to take pole position for Sunday’s Spanish Grand Prix and continue his dominance at the Circuit de Catalunya this weekend.

An uncharacteristic error at the end of his first flying lap in the third qualifying session left him with a single shot at pole at the death.

But he kept his cool to become the only man to go under 1:19 for a lap with a time of 1:18.750. He had looked destined for a qualifying shootout with Max Verstappen but the Dutchman complained of a loss of power and was ordered back to the pits.

While there was a familiarity to the front row of the grid, Mercedes had threatened to get in the mix at the top of the timesheets as Lewis Hamilton and George Russell briefly swapped top spot in Q2.

But despite their upgrades for Barcelona, which have rectified their porpoising and improved their race pace, this wasn’t quite the moment of euphoria many had hoped. In the end, they are still some way off the pace of the Ferrari but there are still reasons for optimism.

Russell got the upper hand over his more experienced teammate once more to qualify fourth behind Carlos Sainz with Hamilton in sixth behind the second Red Bull of Sergio Perez.

Following his pole on a circuit where overtaking is traditionally in short supply, Leclerc said: “I’m in a strong position to start the race. But we’ve been struggling with tyres at the start. We need to get on top of it and do a good job with tyre management. We’ll give it our all. But I’m very very happy with pole position.”

Verstappen was left pondering what might have been without the loss of power although the Red Bull has so far been off the pace of the Ferrari this weekend. But he goes into Sunday’s race with the knowledge that the Red Bulls have been kinder on the Pirelli tyres.

The race is likely to put a strain on the rubber with track temperatures nearly hitting 50 degrees during qualifying and temperatures potentially higher come race day.

The two Haas drivers made it into Q3 for the first time with Kevin Magnussen in eighth and Mick Schumacher in 10th. Hamilton’s former teammate Valtteri Bottas was seventh with Daniel Ricciardo the other top-10 finisher.

It had proved a topsy-turvy session with three teams swapping the top place on the timesheets in front of a packed crowd of 110,000.

There was disappointment in the packed stands as home favourite Fernando Alonso failed to make it out of the first qualifying session after being held up in traffic. The stewards briefly looked into the possibility that he was impeded by Lando Norris but decided no further action was needed.

The big surprise to exit from the second qualifying session was McLaren’s Norris, his lap time erased after he had exceeded track limits at turn 12, before Leclerc dominated the finale with his lap at the death. 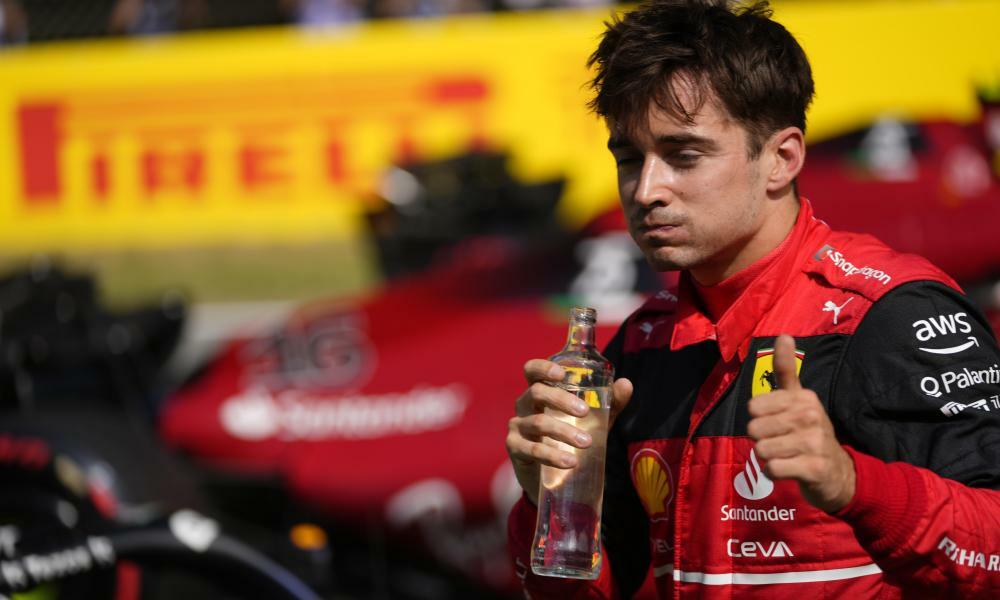