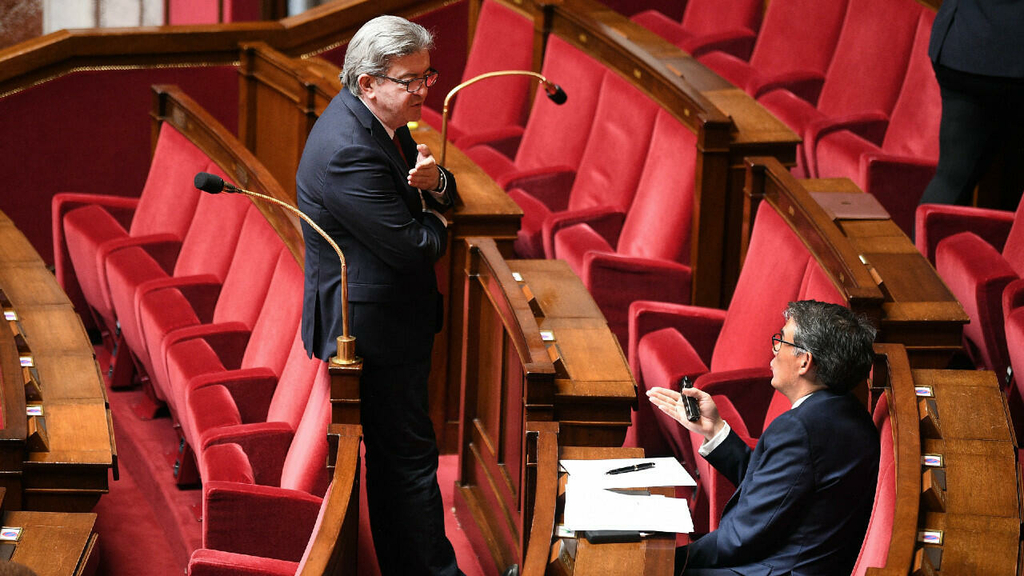 France 24
The left has finally got its act together – in France. Watch out, Macron and Le Pen

French far-right politician Marine Le Pen returned to the electoral fray on Sunday, announcing herself as a candidate in the…

French far-right pundit Eric Zemmour, who made a failed bid for the presidential elections last month, said on Thursday that…

Close on the heels of April's presidential vote, French voters go back to the ballot box on June 12 and 19 to elect lawmakers to the National Assembly. France's legislative elections tend to pale next to the limelight-stealing race for the Élysée Palace, but with 577 distinct races to fill lower-house seats, their results are no less critical to daily life. FRANCE 24 explains the ins and outs.

French voters will elect 577 lawmakers from as many districts to sit in the lower-house National Assembly in June. The lawmakers are known as deputies and sit for five-year terms, voting for (or against) legislation in a semi-circular chamber – known colloquially as the hémicycle – inside the Bourbon Palace in central Paris. During the most recent legislature – which began in 2017 and was suspended shortly before the 2022 presidential campaign began in March – National Assembly deputies passed some 354 bills into law.

Beyond lawmaking, deputies are also tasked with monitoring government activity. They can hold cabinet ministers to account, in writing or orally, during designated question periods on Tuesdays and Wednesdays, be it with questions on local matters in the districts they represent or on national policy. They can also demand that parliamentary inquiry committees be convened to enlighten legislators on a particular issue. Recent examples include a committee convened over a scandal in private care homes and another after Corsican nationalist Yvan Colonna was fatally assaulted in prison in March.

The number of National Assembly deputies has changed over time to track with population shifts nationwide. For the purposes of the upcoming legislative elections, seats are divided by tranches of the population, known as circonscriptions or constituencies. Each is meant to represent 125,000 residents. France is currently divided into 566 legislative districts, plus the 11 more added in 2012 to provide representation for some 2.5 million French citizens resident abroad.

Still, today's legislative divisions have not necessarily kept pace with population shifts: The numbers of deputies in administrative departments that have shed residents in recent years have never been scaled back. During his first presidential campaign in 2017, Emmanuel Macron pledged to reduce the number of deputies (and senators) by one-third as a cost-cutting measure. But Macron's institutional reforms were hobbled by a series of national and international crises – the Benalla scandal, the Yellow Vest protests and Covid-19 – falling by the wayside during his first term. The campaign platform that saw Macron re-elected in April didn't put the issue back on the table.

Deputies are elected by direct universal suffrage, which means every French adult registered to vote can cast a ballot. In each district, the vote takes place in two rounds, one week apart. But if one candidate scores an absolute majority, more than 50 percent of the vote as well as 25 percent of registered voters, the individual is elected without the need for a second round. That feat is rare, however: only four deputies of the 577 elected in 2017 won office directly in the first round.

Every candidate who wins the support of at least 12.5 percent of registered voters can advance to the second round. If only one candidate hits that mark, the next-highest-scoring candidate nevertheless gets promoted to the second-round duel. If no candidate manages it, the top two vote-getters advance regardless.

To stand in France's legislative elections, a candidate must be a French national aged 18 or older. But there are caveats: Courts can issue penalties to offenders that render them ineligible to run for elected office. Certain high-level public servants (prefects, magistrates, school superintendents) aren't allowed to run in the districts where they held those positions for a specific period of time. Individuals under guardianship aren't allowed to run. Since 2017, deputies aren't allowed to combine that job with other elected offices such as mayor or the presidency or vice-presidency of a region, department, or grouping of towns or cities; they can stand as candidates, but must decide which mandate to keep and which to quit once elected.

Having any connection to a particular district isn't required before running to represent it, and a candidate doesn't have to establish residency. "Deputies are invested with a national mandate. Although elected in one constituency, each deputy represents the nation as a whole," the National Assembly website states. How such "parachuted in" candidates play with the voters they'll need to persuade to get elected is another matter.

Although political parties begin their behind-the-scenes negotiations well before – with horse-trading rife as they seek out potential alliances – the window for filing candidacies only opens on May 16. The final deadline is May 20 at 6pm sharp. For the second round, the window for finalists to officially throw their hats in the ring is June 13-14.

The legislative campaign officially begins on May 30. Campaign posters appear, pasted in specially designated locations in every city, town and village across the country. The campaign also kicks off on radio and television for the parties taking part.

Three days after the second round, the freshly elected Assembly takes office. For the next slate of lawmakers – to be known as the 16th Legislature of the Fifth French Republic – it begins on June 22. On June 28, the lawmakers elect the chamber's president by secret ballot. The political group slated to sit in the house will be officially announced that same day. Finally, the rosters of the National Assembly's eight permanent committees (Foreign Affairs, Economic Affairs, National Defence, etc.) are composed the following day.

Any deputy elected can decide to join the political group of his or her choice. To form an official parliamentary group, the threshold is 15 deputies (down from 20 before 2009). In general, groups are formed according to lawmakers' political allegiances. But it does happen that deputies from multiple parties band together to form a parliamentary group to meet that golden threshold.

The stakes are indeed high, politically and financially. Having a group is a prerequisite to bringing any real influence to bear on the chamber's debates or the workings of the Assembly. In practical terms, a parliamentary group is allocated more speaking time to query government ministers during question periods. It can also request that a session be suspended. Financially speaking, only parliamentary groups receive Assembly funding to cover their expenses, allowing them to take on parliamentary staff. And those groups alone enjoy access to facilities like parliamentary offices and conference rooms.

Higher thresholds open doors to yet more coveted privileges, which are generally only accessible to France's major political parties. Some 58 deputies are required to issue a no-confidence motion, which launches a debate and entails a vote. Sixty deputies from one party are needed to refer a law to the Constitutional Council to rule on whether it complies with France's fundamental principles. Meanwhile, a full 185 deputies are required to request the holding of a shared-initiative referendum. But before any such referendum can be held, the proposal must first garner the signatures of 4 million French voters.

Simply put, "cohabitation" is a power-sharing scenario wherein France's president and prime minister hail from different sides of the political fence. It occurs when, after legislative elections, the National Assembly is dominated by a party other than the president's own party.

Cohabitation has happened three times in France's modern political era since 1958, including twice under Socialist president François Mitterrand, with conservative prime ministers Jacques Chirac and Édouard Balladur serving from 1986 to 1988 and 1993 to 1995, respectively. The most recent period of cohabitation dates back 20 years. In 1997, Chirac, by then president, unwisely dissolved parliament thinking he could bolster his majority with fresh legislative elections; he was wrong. The left won a majority and Socialist Lionel Jospin served as prime minister for five years, until 2002.

>> Explainer: What does a French president do?

During periods of cohabitation, the president is obliged to name a prime minister from the new lower-house majority. The head of state and head of government must "coexist" to run the country. The situation is disadvantageous to a president, who loses decision-making power over domestic matters as the prime minister's majority in parliament hews to its own legislative agenda. The president has to share prerogatives with the prime minister and cannot compel the latter to resign. A president does, however, maintain the power to dissolve parliament and trigger new legislative elections (for better or worse – see Chirac, above).

Since 2002, after reforms that rejigged the electoral calendar and shortened presidential terms to parallel legislators' own five years in office, France's legislative elections have been scheduled to follow shortly after presidential elections. The move has naturally made cohabitation less likely since a population who just weeks prior voted to choose a new president has generally given the freshly elected leader the legislative wherewithal to make good on those winning campaign pledges.

But while less likely, cohabitation isn't impossible. And so the suspense remains ahead of voting on June 12 and 19. Stay tuned.

This article has been translated and adapted from the original in French.

France 24
The left has finally got its act together – in France. Watch out, Macron and Le Pen

French far-right politician Marine Le Pen returned to the electoral fray on Sunday, announcing herself as a candidate in the…

French far-right pundit Eric Zemmour, who made a failed bid for the presidential elections last month, said on Thursday that…