Defence Minister Rajnath Singh on May 17 launched into water two frontline warships of the Indian Navy, Surat and Udaygiri, at Mazagon Docks Shipbuilders Limited (MDL) in Mumbai. While Surat is the fourth guided missile destroyer built under the Indian Navy’s Project 15B, advanced stealth frigate warship Udaygiri is part of Project 17A. The two warships have been designed by the Directorate of Naval Design (DND) and built at MDL. Around 75% of the equipment and systems required for building the two ships was sourced from indigenous firms, including micro, small and medium enterprises (MSMEs), the Indian Navy said in a statement.

The Defence Minister, in his address after the launch, termed the two warships as “shining examples” of India’s growing indigenous capability. “These warships will be among the most technologically advanced missile carriers in the world that will cater to the present as well as future requirements,” Mr. Singh said.

The ‘launch’ of warships

The launch of a ship refers to it entering water for the first time. The process is carried out in tandem with the rising and receding tides. The next step after launch involves outfitting inside the ship, which is followed by sea trials. Once trials are done, a ship is commissioned.

How were the names of the two new warships selected?

Following its traditions and policy guidelines, the Indian Navy has named the destroyer Surat after the commercial capital of Gujarat, which is famous for its rich maritime and shipbuilding history. Frigates, meanwhile, are named after mountain ranges. The ship Udaygiri gets its name from a mountain range in Andhra Pradesh.

Falling in line with the government’s Atmanirbhar (self-reliance) push to cut down on defence imports, the Indian Navy’s efforts to indigenise its equipment and systems started early. In 2014, it implemented the Indigenisation Plan (INIP) 2015-2030 for indigenous development of its resources. It further ramped up its efforts with a focus on weapons and aviation-related equipment. As of April 2022, 39 of the 41 ships and submarines that were under construction were being built in Indian shipyards.

Surat: The last of Project 15B destroyers

Project 15B or Vishakhapatnam class, was launched to add four stealth guided-missile destroyers and was envisaged to incorporate technological advancements in the naval ships. The P-15B destroyers were to incorporate new design concepts for improved survivability, sea keeping, stealth and manoeuvrability.

In a statement earlier, the Indian Navy said enhanced stealth features were achieved through the shaping of hull and the use of radar transparent deck fittings which made these ships difficult to detect. On their special features, it said that ships of the P-15B programme will have state-of-the-art weapons and sensors, including a vertically launched missile system for long-distance engagement of shore and sea-based targets. These ships will be equipped to carry and operate two multiple role helicopters, it added.

The first ship of this class, INS Visakhapatnam, was commissioned in 2021. The other two—Mormugao and Imphal—have been launched but not commissioned yet. All three, including Surat, are likely to be commissioned between 2023 and 2025.

The other warship, Udaygiri, is the third stealth frigate of the P-17A class. The programme is a follow-up of Project 17 or Shivalik class which was approved by the government in the late 1990s to build multi-role stealth frigates, a type of Naval warship that comes below a destroyer.

Project 17A or Nilgiri class, with an estimated cost of ₹45,000 crore, was envisaged to build seven advanced guided missile frigates with an improved degree of stealth features, improved anti-air and surface war capabilities in the form of advanced weapons, sensors and platform management systems.

“Various novel concepts and technologies like integrated construction and mega block outsourcing have been adopted for the first time in indigenous warship design and construction in this project,” the Navy said in a statement. The first two ships of P-17A were launched in 2019 and 2020.

After the concurrent launch of Surat and Udaygiri, Mr. Rajnath Singh said the two warships will add might to the Indian Navy’s arsenal and represent to the world India’s power of self-reliance. He exuded confidence that India will not only cater to its shipbuilding needs but also others in the coming days.

Mr. Singh said the ever-evolving security scenario in the Indian Ocean and the Indo-Pacific region demands a more important role for the Indian Navy in the times to come.

“The Indo-Pacific region is important for the economy of the whole world. India is a responsible maritime stakeholder in the region. We support consensus-based principles and peaceful, open, rule-based and stable maritime order. Being an important country in this region, it is the primary objective of our Navy to keep the Indo-Pacific open, safe and secure,” he said.

The Defence Minister called for devising policies focusing on improving the country’s presence in the region, its role during disasters, economic well-being and carrying forward foreign policies. 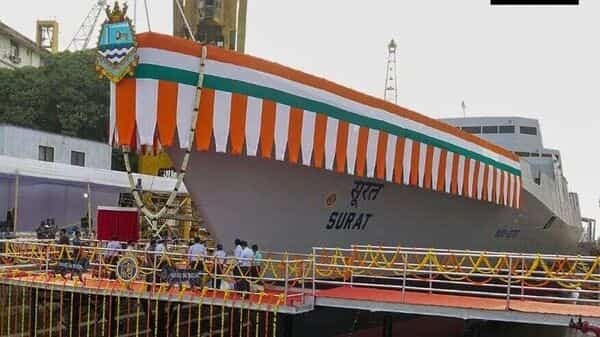 INS Surat and INS Udaygiri: Indian Navy's two new frontline warships.5 points
The ship 'Surat' is the fourth and last of the stealth destroyers under the 'Project 15B' programme.

Livemint
One subscription that gives you access to news from hundreds of sites
It is primary objective of Navy to keep Indo-Pacific open, safe and secure: Rajnath