Scientists have warned the coronavirus appears to be spreading across Europe and Asia without showing symptoms, and even the most radical screening measures are likely missing most cases.

More than 80,000 people have now been infected with the Covid-19 virus and 2707 people have died since it first emerged at a seafood market in China in late December.

Cities across the world have been plunged into lockdown, with borders closed and airports thoroughly checking travellers for fevers or flu-like symptoms, news.com.au reported.

But Dr Simon Clarke, a specialist in cellular microbiology at England's University of Reading, said the virus was proving "extremely difficult to track".

"It seems that the virus can pass from person to person without symptoms, making it extremely difficult to track, regardless of what health authorities do."

Even the best screening measures could be missing "more than half of infected people", a global team of researchers from US and UK universities said on Monday.

"Previously, we developed a mathematical model to understand factors governing the effectiveness of traveller screening to prevent spread of emerging pathogens," they wrote in the eLife journal.

"Breaking down the factors leading to screening successes and failures, we find that most cases missed by screening are fundamentally undetectable, because they have not yet developed symptoms and are unaware they were exposed."

WHO: "Countries should prepare as if coronavirus were to appear tomorrow" Video / AP

On Tuesday, the head of a joint World Health Organisation (WHO) China mission of experts said the world is "simply not ready" to rein in the new coronavirus outbreak

"You have to be ready to manage this at a larger scale... and it has to be done fast," Bruce Aylward told reporters in Geneva, insisting countries everywhere have to "be ready as if this hits us tomorrow".

The World Health Organisation says the world should now be prepared for the possibility of a global pandemic.

While it is still too early to call the outbreak a pandemic – when an infectious disease spreads easily across the world – countries should remain vigilant, WHO chief Tedros Adhanom Ghebreyesus told reporters on Monday.

"Does this virus have pandemic potential? Absolutely, it has. Are we there yet? From our assessment, not yet."

Fears of a global pandemic rose after Iran, Italy and South Korea reported a sharp rise in the number of new cases over the weekend.

South Korea reported a seventh death and 231 new cases on Monday, taking its total to 833. Meanwhile Iran, which only announced its first two cases last week, said it had confirmed 43 cases and eight deaths.

Italy is now the epicentre of Europe's biggest outbreak, with some 150 infections – up from just three before Friday – and a fourth death.

Europe's open borders could prove particularly challenging. On Tuesday, Croatia confirmed its first case of the virus after a young man was taken to hospital in Zagreb after visiting Milan.

"At this moment we will concentrate on the contacts this young man had," said Beros.

"For now, he shows signs of a milder disease and we hope it will remain that way," he said, vowing to "raise our level preparedness and defence" against the spread of the disease.

Chinese hospitals continue the fight against coronavirus as the World Health Organisation says others ‘should prepare as if coronavirus were to appear tomorrow.’ Video / AP

Nine other Croatians who work in Italy have been hospitalised in the northern city of Rijeka.

Austria has also recorded its first case and Covid-19 has already been detected in France, Germany, Spain and the UK.

More cases have also appeared in the Middle East, with Bahrain reporting its first case on Monday and Kuwait reporting three cases involving people who had been in Iran.

One thousand tourists on the Spanish Canary Islands have also been confined to a hotel after an Italian doctor staying there with his wife was confirmed to have the disease.

A British guest said guests had been told to stay inside, while another posted a picture of a locked door on Instagram.

"We regret to inform you that for health reasons, the hotel has been closed down. You must remain in your rooms until the health authorities say so."

The WHO has been saying for weeks it dreads the disease reaching countries with weak health systems.

Iraj Harirchi, Iran’s deputy health minister, at the press conference in Tehran, a day before he tested positive for coronavirus. Video / AP

The surge of infections outside mainland China triggered steep falls in Asian shares and Wall Street stock futures as investors fled to safe havens such as gold.

Scientists around the world are still scrambling to analyse the virus, but a vaccine is probably more than a year away. 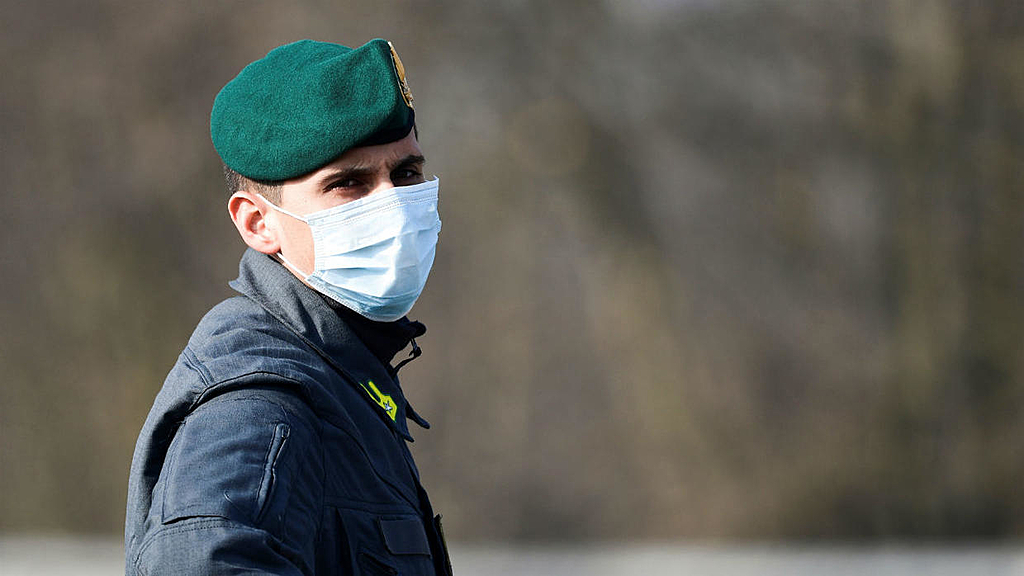 As coronavirus spreads, WHO urges world to ‘prepare for potential pandemic’
The World Health Organization on Monday said the new coronavirus epidemic had "peaked" in China but warned that a surge…