Expansion in Khon Kaen residential to persist in H2

The Khon Kaen residential market is projected to continue its robust growth in the second half of 2022, driven by positive momentum from a recovery of economic activities in the third quarter.

Channarong Buristrakul, president of the Khon Kaen Chamber of Commerce, said the residential market in Khon Kaen posted a strong rebound in the first half, with single detached houses the key driver.

According to the Real Estate Information Center, the number of single detached houses sold in Khon Kaen in the first half totalled 287 units worth 1.14 billion baht, up 23% and 36%, respectively, from the same period last year.

All were from existing projects launched before July 2020 as there was no new condo supply from the second half of 2020 until the first half of 2022.

"Many condo projects will be launched in the second half of this year. Some were previously planned to launch 10 years ago but were held back due to an unfavourable market in the province," he said. "Now they are redesigned from 20-storey to eight-storey buildings."

"Purchasing power came back as people settled down with jobs that suited them the most after the pandemic's impact gave clues on which job could be prolonged or which job needed a change," he said.

He said provincial economic activities were very robust. Events in the province including meetings, seminars, exhibitions and weddings have increased since mid-year after they were pending in the first half.

"The activities resumed every week a few months ago and were very active in August as government agencies' budget will expire this month," he said. "This momentum will carry on into the fourth quarter."

He said restaurants and hotels were busier with corporate events and a comeback of foreigners who regularly travel to the province every year to visit relatives or for business but were unable to do so before the reopening.

However, the contribution of the tourism sector to the economy in the province remained lower than those of the agricultural and industrial sectors which had better production and higher prices.

"If the economic fundamentals are good, purchasing power will resume," Mr Channarong said. "However, non-performing loans should be monitored as aid measures like debt settlement and soft loans are going to expire soon."

Another key driver of the province's economy is investment from the private sector such as sugar manufacturer Mitr Phol Group which invested in a research and development centre as well as relocating its food lab from Bangkok.

However, some manufacturers face a lack of raw materials such as chips. The situation was worse when workers went back to Bangkok and foreign workers could not replace them. 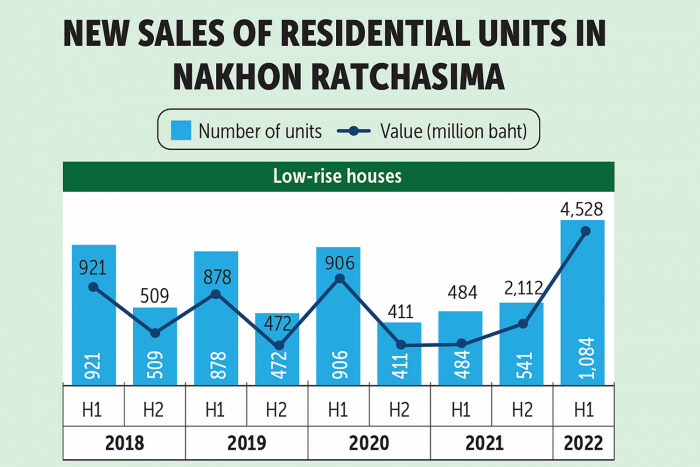 Korat developers irked by spending lull
Despite a robust recovery in the residential market in the first half, developers in Nakhon Ratchasima remain concerned over a…

Bangkok Post
From analysis to the latest developments in health, read the most diverse news in one place.
Inter-provincial bus bursts into flames, passengers unhurt

NAKHON RATCHASIMA: Passengers fled in fear of their lives when an inter-provincial bus burst into flames in Sida district early…

Residential sales in Rayong picked up significantly in the first half with a doubling in growth driven by low-rise houses,…

Bangkok Post
Zen in push to double retail sales by 2027

Zen Corporation Plc, the operator of restaurant chains such as Zen, AKA and Tummour, plans to double its retail sales…

Bangkok Post
One place to find news on any topic, from hundreds of sites.
Festival spending projected to hit B42.2bn

Spending at this year's annual vegetarian festival, scheduled to run from Sept 26 to Oct 4, is expected to improve…