Exhibit Columbus Returns To Indiana’s ‘Athens Of The Prairie’ 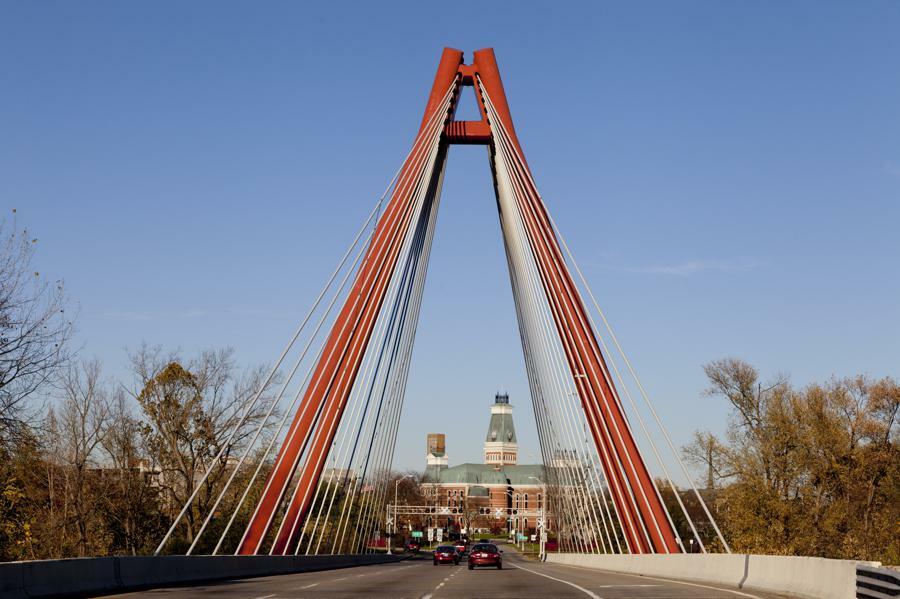 To look at the dot on a map representing Columbus, Indiana, it seems like any other small Midwestern city plopped in the middle of farm country. With roughly 50,000 residents right off Interstate 65 an hour’s drive south of Indianapolis, Columbus isn’t remarkable on paper.

On the ground, however, remarkable defines Columbus, Indiana.

Columbus manufactures over one million nuts and bolts every day. Anchored by Cummins with 8,000 employees county-wide, the economy is thriving–even through COVID–thanks to an abundance of advanced manufacturing jobs. The city has the highest concentration of engineers in the county.

Columbus is home to 37 foreign companies. There are more than 52 languages spoken in its school system and more than 13% of its citizens are foreign-born.

The city is home to more than 80 important works of post-World War II architecture, design, landscape and art by the 20th century’s most notable architects: Eero and Eliel Saarinen, I.M. Pei, Cesar Pelli, Robert Venturi, Dan Kiley and more. It was named as the country’s sixth-most-architecturally important city by the American Institute of Architects.

Exhibit Columbus, on view now through November 28, brings these attributes together through an exploration of architecture, art, design and community activating the city’s design legacy and creating a cycle of programming using this context to start conversations around innovative ideas. Exhibit Columbus features 13 newly commissioned installations responding to the curatorial theme of: “New Middles: From Main Street to Megalopolis, What is the Future of the Middle City?”

Becoming the “Athens of the Prairie”

When J. Irwin Miller convinced his family to hire recently emigrated architect Eliel Saarinen to design the new church they were building in downtown Columbus just prior to World War II, the spark was set for what would inspire the city’s future aesthetic ambitions. Eliel Saarinen and his son Eero–who would go on to design the Gateway Arch in Saint Louis–were then working in Bloomfield, Michigan.

“We should make architecture that defines our time, we shouldn’t be looking to the past, we should be using art and architecture as ways to shape our environment, and if we shape our environment in an excellent way, it will inspire people to be excellent in all they do,” Richard McCoy, executive director of Landmark Columbus Foundation and founder of Exhibit Columbus told Forbes.com in paraphrasing Irwin Miller’s thinking at the time.

Miller and Eero Saarinen would go on to become good friends while Miller was chairing Cummins from the 50s through the 70s while Columbus would go on to commit itself to Modern design and architecture the way no other Midwestern city did.

“By the 60s and 70s, where most of the cities in America are declining and struggling with suburbanization, Columbus is booming,” McCoy, an Indiana native and resident, said. “The community is small enough where it’s really working together and it’s making all these profound investments in the schools and the fire stations and civic buildings and parks, so there’s this long history in Columbus that shows art and architecture are at their highest and best when they make things better for everyone.”

By the 2000s when Irwin Miller and his wife had passed and lost their banking enterprise, questions were being asked around Columbus about what would become of the amazing buildings constructed over the previous half century. Was the city going to be able to care for them? Would it continue making similar investments?

Columbus responded in the affirmative.

In 2018, Indiana University inaugurated the J. Irwin Miller Architecture Program, a master of architecture degree program headquartered not on the main campus in Bloomington, but in Columbus where it calls another architectural gem home.

A new modernist building for Ivy Tech is under construction.

In 2013, Landmark Columbus Foundation, a preservation organization with a dual interest in upholding the city’s design traditions and values, was created. Exhibit Columbus evolved from Landmark Columbus, to “remind the community how awesome (Columbus) is,” McCoy said. “Some people have started to take their town for granted. I hear it so many times, people talk about how they didn’t understand how cool their little town was until they went to other towns.”

The centerpiece of Exhibit Columbus is the J. Irwin Miller and Xenia S. Miller prize, one of nation’s premiere awards for architects, providing the top minds of today an opportunity to participate in the legacy of Columbus and show new ideas.

“It’s at once a fun celebration, it’s education, it’s an architectural exhibition that’s connected through a thoughtful theme that tries to shape a whole different set of ideas that are interconnected,” McCoy said. “You can experience the installations one-on-one and just enjoy them, or you can think about it in totality.”

The new commissions for site-responsive installations from top artists, architects and designers around the world for this cycle of Exhibit Columbus are now dispersed amongst the city’s other design gems and free for the public to visit.

Columbus’ extraordinary history of using art and architecture to define a town lives on.

“This legacy is an asset that differentiates a place. Columbus is in this international battle for talent and to keep residents and attract residents, this becomes our civic identity, this becomes who Columbus is,” McCoy said. “For a town that is fairly small, it’s amazing to have this level of community investment. It helps people feel a sense of place and feel a big sense of pride–this is a cool place to live.”