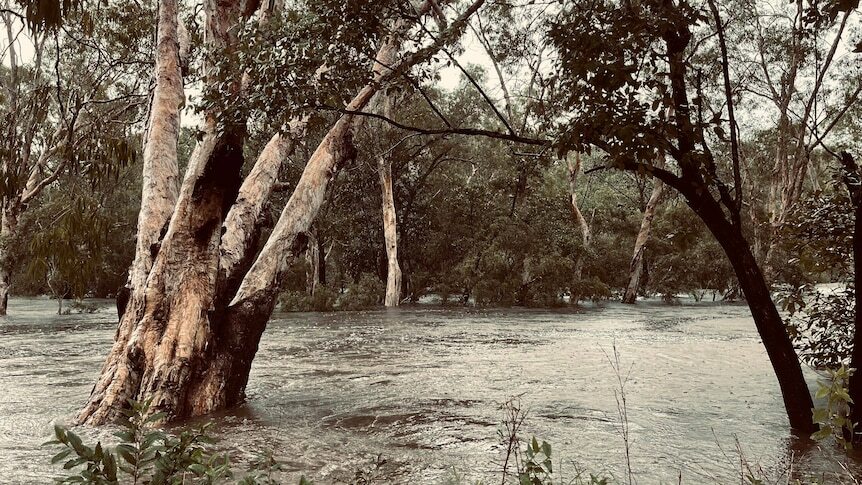 Ex-Tropical Cyclone Tiffany is continuing to move west across the Cape York Peninsula with the Bureau of Meteorology (BOM) warning it will "rapidly intensify" overnight.

The cyclone was downgraded to a low-pressure system yesterday after it made landfall on the eastern side of Cape York.

The system dumped significant rainfall in the area, with more than 174 millimetres falling at Craiglie, just south of Port Douglas, in the 24 hours to 5:00am today.

About 100 kilometres to the west, several people were rescued from floodwaters on the Mulligan Highway at Desailly.

Emergency services were called to the scene just after 1:30am, after a car was swept from the roadway.

Queensland Police said the occupants, two women in their 30s and a man in his 20s spent the next three hours clinging to trees, with other motorists keeping lights on them as they waited for emergency services.

A spokesman for the Queensland Fire and Emergency Services (QFES) said when they arrived the car was completely submerged.

Officers used an inflatable platform to rescue the group, who were then taken to Mareeba Hospital with one treated for shock.

Police Chief Superintendent Chris Hodgman said the group drove past other motorists stopped at floodwaters before attempting to cross.

"We applaud those who are listening to our message and stopping at flooded roads," he said.

"Those who think they are brave in attempting to cross floodwaters are putting their lives at risk.

Another two people were also rescued by members of the public yesterday in Mossman, after their four-wheel-drive was swept off Euluma Creek Road.

Police said the couple in their 80s, attempted to drive through the causeway at about 5:30pm, but the driver lost control of his steering after hitting a submerged object, which pushed the car off the causeway.

Both occupants managed to escape the cabin of the vehicle to the rear tray, where they were rescued by two other locals before emergency services arrived.

Chief Superintendent Hodgman said he was disappointed with the pair's actions.

"We see motorists take these unnecessary risks every time an event such as this happens," he said.

"It was something the driver could not see which could have had serious consequences for both people in this car."

"We're going to see it increase back up to a category one tropical cyclone at about 10:00pm tonight.

"The system will then continue to rapidly intensify, and it'll be a category two again early in the hours of tomorrow morning."

She said even with the system moving off-shore, the impact will be felt over much of northern Queensland and the Northern Territory.

"The system, even though it is in the Gulf is still continuing to push out into the east coast of Queensland as well, with areas such as Cairns continuing to see showers this morning," she said.

"It's highly possible that we could see more storm development at least over the Gulf throughout the day today.

"Just because the centre is in one particular place, doesn't mean other areas are out of the woods just yet."

She said as well as heavy rainfall, some regions should prepare for strong wind gusts.

"We're no longer seeing strong gales wrapping around the system, [but] there does still remain a possibility for gale force wind gust over the south-east Gulf of Carpentaria and the north-east Gulf at times as well this morning," she said.

"Generally, the thing to watch will be the system as it re-intensifies."

The executive manager of community services in Pormpuraaw, Shelina Bartlett, said they were prepared for the worst but fortunately there was no significant damage.

"About 9:00 last night we started getting some rain and some gales … it wasn't too strong," she said.

"That went for a few hours throughout the night … it's just a little bit blustery, this morning."

She said final checks were still being done but there were no emergency call-outs in the community.

"Looks like everyone's had a dry night within their home, apart from one tree limb that is getting cleaned up at the moment, nothing else has been reported.

"[We're] relieved it's over and that no damage was done."