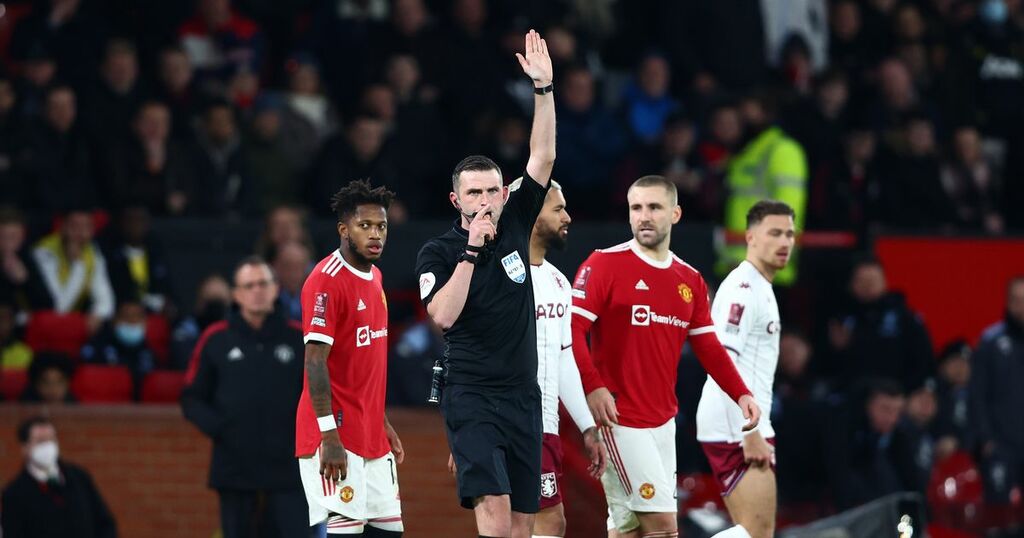 Scott McTominay 's goal secured a 1-0 win at Old Trafford but it could have been different had the former Southampton striker's goal in the second half stood.

John McGinn swung a teasing free-kick towards the back post, and Ezri Konsa headed it across goal before the 29-year-old bundled the ball home.

Their celebrations were cut short, though, as VAR official Darren England instructed match referee Michael Oliver to go over to the monitor and, after over three minutes of deliberating, he ruled out the goal.

Ings' strike partner, Ollie Watkins, had rattled the bar in the first half but it was an end-to-end clash with the main talking point coming as their avenue back into the cup tie was snatched off them.

In the build-up, Jacob Ramsey was stood in an offside position, but as play resumed he blocked Edinson Cavani in the process, denying the forward an opportunity to defend the set-piece.

Gallagher, who officiated for 15 years in the English top-flight, highlighted a number of key reasons as to why it didn't stand.

He told Sky Sports: "Ramsey's in an offside position with another Aston Villa player when the free-kick's taken, not an offence at that time but does he challenge an opponent? I think that's the key element, the law says 'does he play the ball?' No. 'Is he in the line of vision of the goalkeeper?' No.

"The third element 'does he challenge an opponent?' Well the VAR felt that by going backwards to regain an onside position, he impacted [Edinson] Cavani's ability to intercept that ball.

"I think what happens then because it's very, very rare you see a VAR send the referee to the monitor for an offside decision, it can only happen if it's a subjective decision and not an actual decision and on this occasion Daniel England sent Michael Oliver, explained why he sent him, Michael Oliver looked at it, felt that Cavani had been impacted by Ramsey [and] disallowed the goal.

"You can see that because he calls Tyrone Mings, the Villa captain, explains how he's arose to that decision. It took three-and-a-half minutes, a long, long time, a lot of things to look at. In the end, the law does say 'does he impact the opponent?' It came down to Darren England's judgement and between them they felt Cavani was impacted that's why the goal was disallowed."

Did Michael Oliver make the right decision? Leave your comment below.

Villa boss Steven Gerrard returned to Old Trafford for the first time as a manager, his first game since 2014.

He failed to get embroiled in the lambasting of the officials but did question the decision in his post-match press conference.

"How long have you got? The officials took three and a half minutes to settle that one," Gerrard said.

"They have looked at two or three things in it.

“Now I've heard the reasons why, it wasn’t that complex to need three-and-a-half minutes.

“It was disappointing that it took so long, as we were in a good place at the time and that took a bit of sting out of the game for us.”