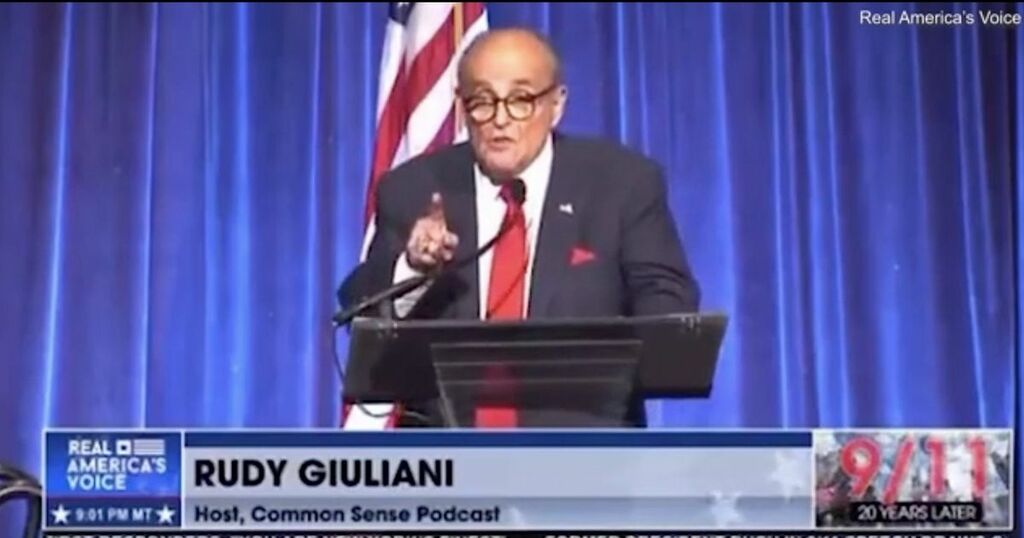 Rudy Giuliani mocked the Queen's accent and called America's top military officer an ‘idiot’ and ‘a*****e’ during a 9/11 commemoration dinner on Saturday.

The former New York City mayor also denied hanging out with Prince Andrew and underage women as he spoke at the event in Manhattan.

The dinner is held every year to commemorate the September 11, 2001 terrorist attacks.

In February 2002, just months after the September 11 attacks, Giuliani was awarded an honorary knighthood by the Queen in recognition of his leadership during the tragedy.

During the dinner, Giuliani tried to mimic the 95-year-old monarch with a poor attempt at a British accent.

"And therefore I’m making you an honorary knight, commander of the royal something or other."

The 77-year-old then added: "I turned down a knighthood because if you took a knighthood, you had to lose your citizenship."

Several video clips posted on Twitter show Giuliani give a rambling talk at the podium.

The former mayor, who most recently served as former President Donald Trump ’s lawyer, criticised Joint Chiefs Chairman Mark Milley, whose name he mispronounces after referring to him as ‘Miley.’

He slammed Milley and Joe Biden's administration for the chaotic withdrawal from Afghanistan saying it was ‘freaking insane.’

Giuliani then goes on to describe how he would approach Milley if he saw him in person.

He said: "I wanted to grab his stars and shove it down his throat and say, "It's 400 miles from China, a-hole!

"China is going to be our enemy for the next 40 years! You have an airbase 400 miles from them and you're giving it up? Idiot!

'What the hell is wrong with you? Who pays you?'

At another point in the speech, Giuliani, speaks about the Duke of York unprompted.

His comments about the royal comes as lawyers for Virginia Giuffre said they served the 61-year-old with legal papers.

The mum-of-three, 38, claims she was loaned out to him by his ­paedophile pal Jeffrey Epstein and the tycoon’s alleged “recruiter” ­Ghislaine Maxwell in 2001.

The prince strongly denies allegations he forced Virginia to have sex when she was 17 and insists he has never met her.

He said: "I know Prince Andrew is very questionable now.

"I never went out with him. Ever!

"Never had a drink with him, never was with a woman or young girl with him.

Giuliani added that he had met Andrew on two separate occasions.

"One time, I met him in my office, and one time when we had the party," Giuliani said.

Giuliani's rant is the latest bizarre public appearance by the once-beloved mayor who is credited with leading New York City out of the turmoil caused by the terror attacks.

The atrocity claimed the lives of almost 3,000 people including 67 Brits.

Questions have been raised about Giuliani's sobriety and overall well-being since a change his behaviour in recent years.