Everything you need to know about Saturday's AUOB march in Glasgow

THE Yes movement is massing in Glasgow this weekend for a major independence march and rally.

All Under One Banner (AUOB) is holding the event in Scotland’s biggest city on Saturday, May 14.

Named March for Independence – Defend Our NHS, the event is also a protest against the privatisation of the health service.

AUOB issued this rallying cry ahead of the event: “On Saturday, we march for independence and rally at George Square. Make sure to attend this national demonstration, which will empower the extra-parliamentary movement, express our defiance of Westminster rule and demand for action in the Scottish Parliament. Be there!”

Here’s everything you need to know about the march and rally.

Where does it begin?

The march starts at 12 noon sharp from Kelvin Way. Marchers are advised to leave early to be organised into formation by stewards – especially those travelling from afar who are best to give plenty of time for their journeys.

When is the stewards’ briefing?

The organisers are seeking additional volunteer stewards. If you wish to join the team then please attend the stewards briefing which will take place at 11.30am on Kelvin Way. However, if you miss this then simply speak to a steward (those wearing hi-vis vests) and you will be integrated into the operation.

Anyone who will struggle walking uphill is advised to join after the march passes Blythswood Square where the route is then downhill/flat towards George Square.

How many will be there?

Organisers estimate several thousand people will attend the demonstration, March for Independence – Defend Our NHS. AUOB marches are rebuilding the mass movement in the aftermath of the pandemic. Saor Alba Pipes and Drums will be the front band on Saturday, with an estimated 15 members mobilised. Independence supporters are encouraged to bring instruments, drums and whistles for maximum audibility.

ON SATURDAY we march for independence and rally at George Sq. Make sure to attend this National Demonstration, which will empower the Extra-Parliamentary movement, express our Defiance of Westminster rule and Demand for action in the Scottish Parliament. Be there! 🏴󠁧󠁢󠁳󠁣󠁴󠁿 #AUOBGlasgow pic.twitter.com/fgXgvVoVPm

Has coach travel been organised?

Two Yes groups, Now Scotland and Yes Perth City, are known to be running coaches to the march on Saturday.

Now Scotland: Coach leaves from Edinburgh (Waterloo place) at 10.30am and returns at 4pm. Tickets are £5 each and can be bought via eventbrite or on a first come first serve basis at the coach.

Yes Perth City: Coach leaves Perth (Broxden Park and Ride) at 10am and returns 4pm. Tickets are £13 each, can be bought via eventbrite or visit 246 High Street, Perth, Friday 13 May 10am-4pm.

Which roads will be closed?

There will not be any road closures, apart from in practice the route that the procession takes as it passes through the city. Police Scotland will facilitate the march with well used stop and hold measures, which in co-operation with the AUOB steward team will ensure safe passage for all participants and minimum disruption to traffic and public transport.

Where is the rally?

The rally will take place in George Square and begins once the march arrives at approximately 1pm, and will finish around 3.30pm. There will be speakers from the SNP, NHS for Yes, a trade union activist, SSP, Alba, SWP, ISP and Now Scotland.

There will also be entertainment from Kevin Gore, Lesley O'Brien, The Gallowgaitors, Pedro Mendez, Rituala and the Carlton Jug Band. The organisers have issued an open invitation to Yes groups to set up stalls in George Square. If you wish to do so please arrive in plenty of time to be good to go for 1pm.

There is no specific dress code for the demonstration, but organisers encourage vibrant colours to be worn, and flags and banners (both Scots and international) are encouraged – for maximum visibility. Participants are encouraged to attend no matter what, most important is to bring yourselves.

When is the next march? 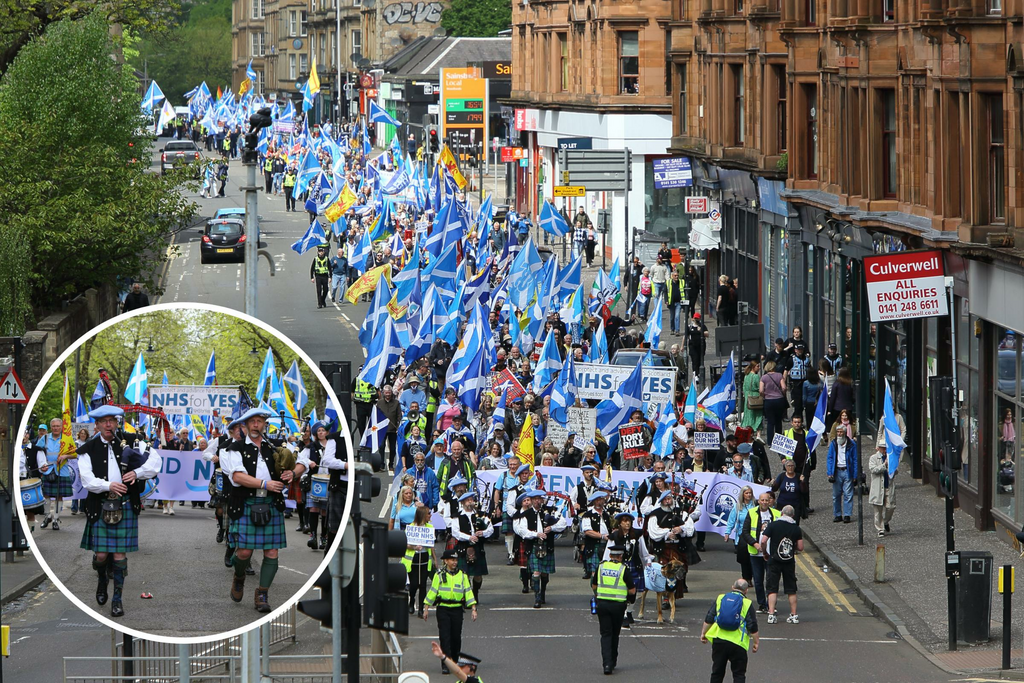 In pictures: Hundreds take part in All Under One Banner March
HUNDREDS of people have gathered in Glasgow today to take part in a major independence march and rally.

Leeds Live
Who is Mika? Everything you need to know about the new Eurovision host