Everything is cake: how increasingly elaborate decorative baking became an online obsession 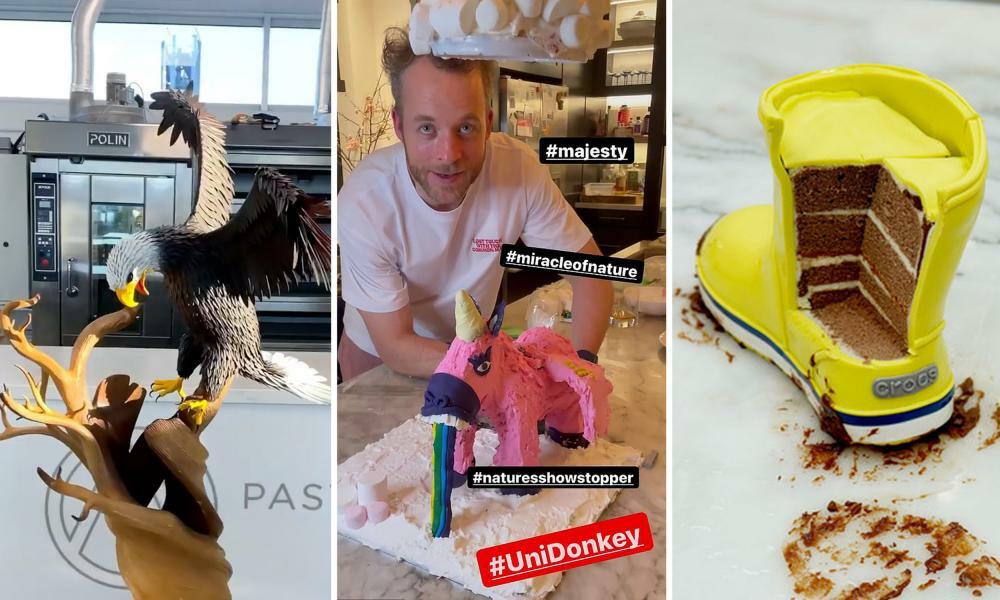 In July last year, a video of various objects being cut open went viral. Knives sliced into a Croc shoe, a pot plant, a roll of toilet paper, a pile of towels – all revealing spongy innards layered with icing.

“These Are All Cakes”, the video was captioned – creations belonging to Red Rose Cake’s Tuba Geçkil, a visual artist turned self-described haute couture cake maker. Posted by the food vertical Tasty, the video has been viewed more than 33m times on Twitter.

The compilation led to a flurry of online jokes, all iterations of knifing things – furniture, tissue boxes, Joffrey’s execution of Ned Stark in Game of Thrones – just to check whether they were also made of cake.

As surely as it was a sign that people had lost their minds in lockdown, the transient is-this-cake obsession stemmed, I suspect, from the uneasiness these culinary illusions evoke: they mess with our tenuous construction of reality.

Consider the discomfort of watching a man appearing to slice up an apple and then his own tattooed arm – a creation by Ben Cullen, a British former tattoo artist – or a bulldog being partially lobotomised, made by Natalie Sideserf, a cake artist who films a hyperrealistic creation each week.

Some of their work falls deep in the uncanny valley, like Sideserf’s cake self-portrait, or her Die Hard-era Bruce Willis, whose smooth CGI patina calls to mind the Ted Lasso actor and “real, normal human man” Brett Goldstein.

Cullen’s edible replica of Rita Ora is better than some likenesses in Madame Tussauds, and is at least less creepy than the bronze bust of Cristiano Ronaldo.

Sideserf describes herself as a “cake artist”, and Geçkil’s and Cullen’s previous occupations as artists are fitting. Their aesthetic sensibility and sculptural precision outstrip most bakers, and it is compelling to watch their creations in progress, which incorporate various sculpture, painting and pottery techniques.

Making an elaborate cake is thanklessly time-consuming, as anyone who has attempted their own – or watched Hamish Blake’s biannual labours of love – can attest.

Each year, the comedian constructs a cake for his son and daughter’s birthdays, documenting the process on Instagram Stories. The client briefs are demanding, like a unicorn with a floating cloud that rains glitter, or a velociraptor that can roar, open and shut its mouth and “whack me in the head with its tail”.

Blake approaches the task with the panicked but optimistic energy of a student starting an assignment the night before it is due, fuelled by booze instead of caffeine. Could he begin them earlier and thereby avoid having to stay up until 3am? Yes. Would they be nearly as entertaining to watch, the stakes of failure as high? No. The results are impressive, even when the process goes awry – not least because the time investment is a heartwarming expression of a father’s devotion.

Over the years I have become the type of cake baker who cuts corners out of indolence: I microwave chocolate because I can’t be bothered using a double boiler; I’ll ice two Woolworths mud cakes together with Betty Crocker and call it my own.

So I content myself with watching pastry chefs and cake artists make their perishable masterpieces online. I scroll, slack-jawed, through the Instagram feed of Amaury Guichon, a pastry chef whose lustrous mega-creations are so precise and labour-intensive it’s difficult to believe they are handmade. I marvel at how Luke Vincentini, another hyperrealistic cake maker, manages to replicate the lustre of surfaces like tiles.

I think: what kind of psychopath pays money to slice up and eat an anatomically correct likeness of their dog? I think: if only fondant didn’t taste like desiccated disappointment. I think: God, the washing up must be a nightmare.

It is mesmerising to watch the labour people devote to something whose sole purpose is destruction, where the full value of the artistic work is not realised until it is taken apart. It is reminiscent of Ai Weiwei’s triptych of himself dropping a Han dynasty urn, or the ceramics of Bouke de Vries, who creates sculptural still lifes of objects – an 18th century Chinese teapot, say – at the moment of their explosion.

In 2006 the artist Clare Twomey created an artwork called Trophy, which filled the V&A Museum in London with 4,000 blue clay birds. Visitors were invited to take them home, and over a day the installation disappeared – paradoxically becoming complete, as the art historian Laura Gray has pointed out.

There feels like an apt parallel between the installation and cake art, where ephemerality is the point. The creation is shared, and enjoyed both collectively and individually. Eventually we find something else to marvel at or lose our minds over. It disappears, making the experience all the sweeter while it lasts.