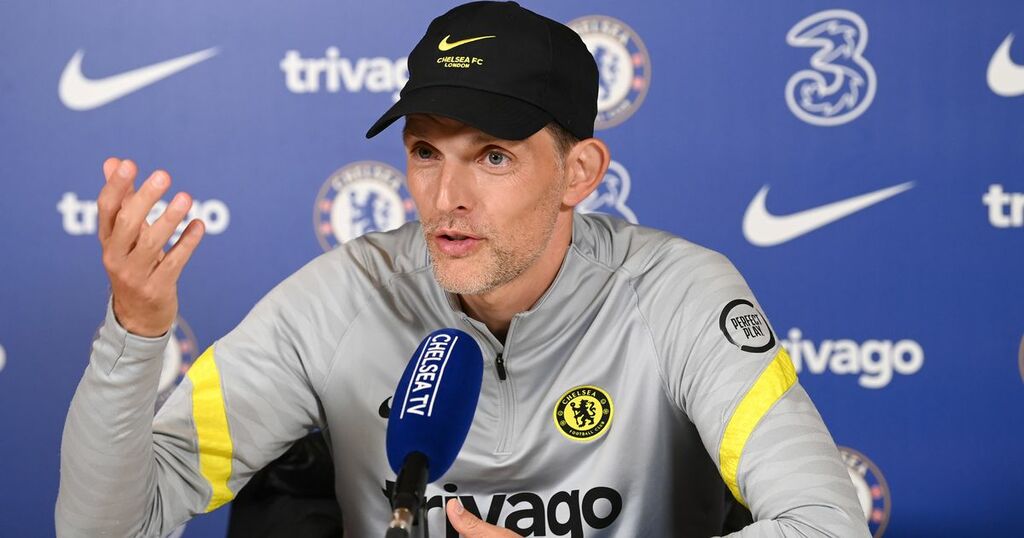 Is winning the Champions League the greatest success of your coaching career?

"If I have to fire back quickly I would say yes, but in general I find it pretty hard to rate your achievements, because who wants to be the judge, and who wants to know.

"I tried together with my staff and my team to be the best that I can and to put the best out of my teams, and I did it when I was Under-14 coach at the youth academy and I do it now.

"To the outside, speaking about trophies and speaking about that, it's obviously the biggest title that I won so far, it was a huge night and a big experience. But it honestly feels like it was a long time ago, and it's necessary that it feels like that.

"We are all focused on tomorrow, it's the most important game in the CL campaign run that we play, it's the first one in the group stage."

For Romelu Lukaku, scoring at Stamford Bridge was a dream. How powerful is that for you to be able to harness?

"I think you can estimate when you hear what he says. He dreamed about it since he was a little boy and he has the opportunity to come back as a number nine and the go-to guy upfront and to be the guy to help the team with goals, this is what he's up to.

"He's not shy of speaking it out loud, that's why he's our number nine, that's why we are very happy to share the experience with him. He's a lovely guy, nice guy, and a tough competitor.

"We all know how important it is to have a good start as a striker and not wait too long for their goals.

"So we are very happy that he helps us with goals, and that he had this experience so early in the season, the first game at Stamford Bridge. Hopefully, he can continue tomorrow to score and be decisive for us."

What is the latest team news, are N'Golo Kante and Christian Pulisic fit?

"Christian did not train with us, he's in that 10-day period where we want to bring him back to the pitch. So he's still in treatment and individual training.

"N'Golo had two training sessions yesterday and today, but the Champions League game comes a bit too early. We won't take the risk now at this moment of the season.

"So we decided to give him another load tomorrow in training then he will have a day off with all of us, then he will rejoin team training on Thursday, Friday, Saturday, to be absolutely fit and ready for Tottenham.

Has winning the Champions League changed your mentality, do you feel different?

"For some days I felt different, yeah. But I think that in the end, nothing is like winning.

"I reached the final, I was lucky to reach the final with my team the year before and I had the feeling it was a big achievement, but not compared to the last step. It's a huge difference when you realise what it means when you do it. The perception from outside, the joy, the experience, the confidence that your team gets by winning it.

"I experienced this the first time maybe with the Mainz academy when we won the Under-19 German title when I was the head coach.

"To be qualified for the semi-final and final was a big achievement, but when you do the last step there's nothing compared to it. Then it really changes something for everybody.

"It's about winning, this game, because winning changes your feeling, your atmosphere, here within the building, your work atmosphere, it changes it completely and it gives you natural confidence.

"At the same time, it is absolutely necessary to forget it, and to start from scratch, and to show this hunger and mentality again. This is what I demand from myself and from everybody else around, that we don't change in terms of hunger.

"We'll have this experience together forever, and we can create a bond and confidence out of it, but it's about looking ahead in sport, and taking up the challenges that are coming. And the next step is tomorrow."

You've got a 12-man bench tomorrow and that probably means, Loftus-Cheek, Sarr and Barkley are on the bench. What is your message for these players and are they in a position where they have to get ready for these games?

"For whatever reason, they didn't find or accept other clubs. Whatever it is, it doesn't matter. Now they deserve to take the next step and be part of this group and as this group, you have to match the high expectations we have of ourselves. It's that simple. They have to be ready. When they are in the group, they need to do everything to be match ready.

"I have the feeling they are otherwise they would not be on the list or be on the bench. But they are. They are showing a good mentality and putting their personal situations aside. They live it day by day, this is what we demand. No promises are made but anything can happen."

Do you consider yourself as one of the favourites for this season's Champions League?

"You can do what you want, it'll not change our approach. We came a little bit out of the shadow [last season], not many people would have thought we would be the winners of this competition in the end. But believe it or not, I think there are so many teams who can win it.

"You need a bit of luck, momentum, a good group but there are so many teams out there who have a good group, a strong club, good players, good coaches. This competition is a very open competition and like you also see in other sports, anything is possible if you believe, have momentum and have luck. This is what we had. We had a strong bond and it wasn't like we deserved to win it. We were maybe a surprised to win it but it wasn't undeserved.

"This can happen to anybody and this is how we start. We start from scratch, zero points, Zenit come with the same and the so everybody has the same chance. So the target is to reach our own top level every single game, if we do this, anything is possible. If we don't, we will not be long in the Champions League. It's as easy as that."

Ben Chilwell hasn't played since the Champions League final and didn't play a single minute for England at the European Championships. Was that hard for him and have you spoken to him?

"It has absolutely been difficult for him and I think it is pretty normal.

"He came from a Champions League win, from 90 minutes and strong performances, a good end of the season where he played a lot of minutes for us and many important, crucial games on a high level.

"Then it was individually for him, personally a tough Euros because there were chances I think where he thought he could have played. He did not. So personally I know that it was a tough one because you feel he did everything to push the team.

"You feel as part of the team but you don’t feel it really if you don’t sweat it out on the pitch and you never wear the shirt and you are never really involved, it is a strange feeling.

"It was necessary to keep training for four or five weeks continuously. Then he had a personal break and it was hard for him to totally relax and to get his personal disappointment off the shoulders. When he arrived here I felt him mentally tired. Still worrying about the situation and at the same time he had to accept.

"He was very unlucky – also now during the start of the season because Marcos [Alonso] was here the whole pre-season and he did every single training session and he took this opportunity with such huge quality and attitude, so Marcos was crucial for us in the first day of training and then he delivered in Chilly’s position and these are two specialists for the same position, so this is a tough competition for both of them.

"We had some talks with Chilly about the situation. He knows that I would have done the same thing the other way round – to trust him if he was here and showed this kind of personality and attitude like Marcos did. They push each other and there are no further worries for Chilly.

"He must be a bit patient and keep on training. It took some time. We had to give him a little bit of time to be a bit more patient with himself. To find the joy again and find things a little bit more easy on the pitch and not want to force it too hard.

"This is where we are now and unfortunately, we only had three substitutes in the last matches in the Premier League otherwise we would have made him play some minutes. But he is in the race now. The situation has changed for him. He is in good shape, in mental shape, attitude and good shape on the pitch so he can play any minute."

Would winning this season's Champions League feel more like your own success given you arrived in January last season to replace Frank Lampard?

"It was never a problem for me to totally accept the work that Frank did throughout the group stage. Of course, this is what I accept and this was the situation when I came in. But it still feels like my title. It does not feel like half a Champions League title that I won.

"I absolutely accept that Frank has his part in this, it is like it is. But in the moment of the final, I was responsible and during the knockout games. It felt in this moment like my team and we are together in all this. This does not mean we deny the work and effort that Frank did.

"Do I have the feeling that I have something to prove that I can bring teams through the group stage? No. This has nothing to do with it. We need to accept how tough this is. Nobody is shy here to admit that we fight for any competition that we play in.

"So when we Champions League, we fight for the maximum outcome. This is tomorrow: three points. It might sound super boring but it is like this and we want to have a good start tomorrow and we need to start from scratch so let’s see how long this journey takes us.

Hopefully, I can prove to you and myself that I can make it all the way, but it is a bit early to talk about it. No hard feelings so far. we go with a positive feeling tomorrow."