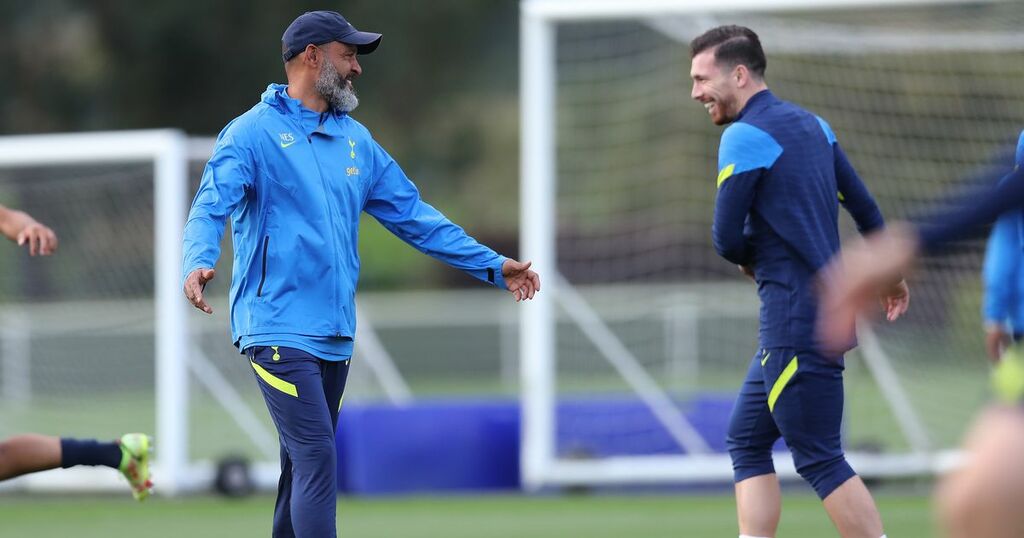 Congratulations on the manager of the month award, is it now about carrying on doing what you're doing?

Thank you for the award, but the award is for everybody. It's for the football club, especially for the players as they are the ones since day one committed themselves, and they won the three games.

Like some of our players, he came (back) with some issues. Sonny is not so well, but let's wait for the club to make the proper announcement and explain to you better what kind of injury he has.

Romero, Sanchez, Lo Celso - will they be fined? Can you clear it up?

All the situation that happened... first it's confusing for everybody., because we don't have too many news from the governing bodies on what we should do, what to expect in the next international break.

This is the main concern for us that things can be solved for the future, but it's really difficult to understand because first of all when a player is called up to play for his national team, that's one the most important thing a player has, and we need to understand that.

At the same time we need to understand that this can happen to any of our players, not only the South American ones - our European players can suddenly be in the same situation, because it's a pandemic, and no one is able to control it.

More than that all the issues, all the situations, we're going to solve it between ourselves.

Tanguy Ndombele stayed at the club, will he be back in squad tomorrow?

We're going to assess now all the situations inside the squad tomorrow but Tanguy is here, he's our player, let's try to make the best of him.

Are you happy with the transfer window?

Can you clarify where Lo Celso, Romero and Sanchez are right now?

I can tell you that they are in Croatia. That's what we decided to do to try to avoid more problems. So the solution was to try to get them in a country where after that they can join the group. Now they are working with the sports science, a physio, in Croatia.

Does the football calendar need to change, what's going to happen next month?

I don't know what's going to happen. Every time that an international break comes on it's always a concern for us, to manage as a group because you cannot control. There is nothing much more that I can say that will avoid or find a solution for this problem. With FIFA, UEFA and the Premier League, they know that we have a big, big issue among the clubs, so I hope they solve it. I hope they solve it, but nothing I'm going to say is going to bring a solution to it.

Is it something the Premier League clubs need to come together to stop it happening again?

I think they did it before but FIFA is the governing body of football so we expect answers from FIFA that can tell us what we should do, because it's not only us, it's all the clubs in the Premier League. Like I said before it happens with South American players but suddenly it could happen with European players so imagine that our England internationals cannot join the England team because they would go to a red list country. Big problem.

Are you disappointed in the three players that they made the choice to go or do you understand it?

Like I said before, when a player is called to the national team it's something that for us as a club makes us particularly proud because it reflects on the quality of the players that we have and we have to respect, we have to respect. Much more of that, we'll deal with the problems between us.

Is Son's injury a long term one?

I don't know. Let's wait and see. The doctors will make the proper diagnostics.

How much progress do you feel you've been able to make at Tottenham?

We are working very hard every day. The award, I thank you for it but it's an award for everybody. For the football club but especially for the players. They are the ones committed who worked very hard. They won the three games. The progress is day by day. Day by day. What we achieved before is only to make us stronger for the future.

Do you have a stronger squad now the transfer window has closed?

Tell us why you brought Emerson Royal to the club?

He's a good player. He's very talented. He showed himself in La Liga, which is a tough competition. We signed him because we believe he can help us. He's an offensive full-back. He has aspects to improve and that's our job.

All the players are so important for us. All of them. We want to bring the best of each of them so we can help the team.

Do you still want Dele to have that goal threat despite his new position?

Will Steven Bergwijn, Oliver Skipp or Ryan Sessegnon be available?

Let's wait and see. We have to assess, speak with the medical department and make the decision on the squad for tomorrow.

Will the players in Croatia be back for the Rennes match or Chelsea match?

They will arrive the day before the match against Chelsea so they will not be available for the Conference League game.

Have you had a chance to talk to Tanguy?

We speak with all the players, we speak with them, it's natural. It is part of our work, it is the way we work, dialogue is the main thing for us.

Could Bryan Gil be ready if you need to start him?

How has Emerson settled in?

He has settled in well, he has to improve his English. He only hangs around with Lucas at this moment, which is normal, but he has settled in well. He is a good player and the way the group is operating any player that joins us is integrated well because the boys are aware that everybody should feel comfortable and in a nice environment so Emerson is okay.