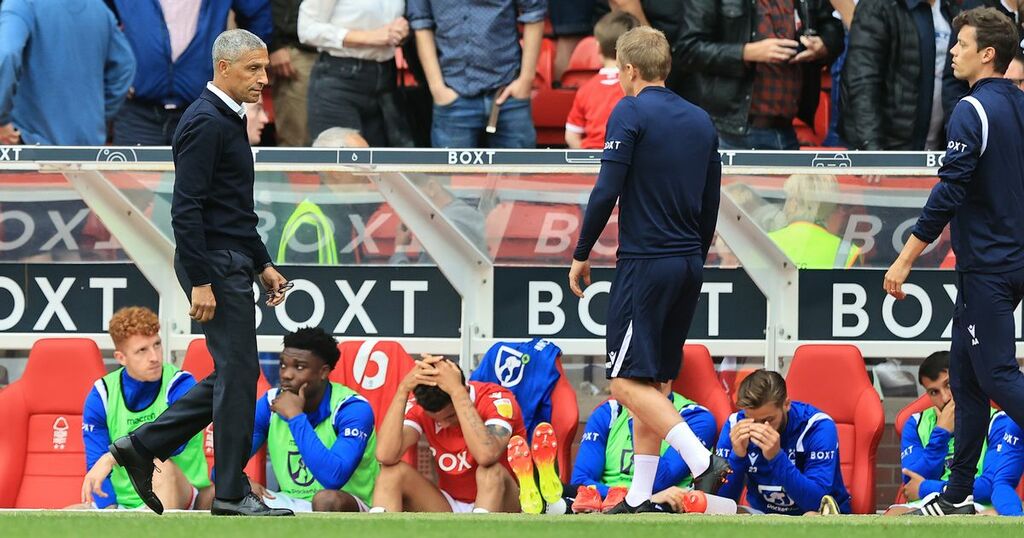 Defeat to Cardiff City on Sunday afternoon made it Nottingham Forest's worst start to a season for 108 years.

The Reds remain rock bottom of the Championship table after six games, with just one point to their name, leaving boss Chris Hughton under mounting pressure.

His team took the lead in the first half at the City Ground, courtesy of a well-worked goal from Lewis Grabban.

But in a dismal second period they struggled to cope with a physical Bluebirds side and were toppled by a Rubin Colwill brace.

Here's what the Forest boss had to say at the final whistle.

What did you make of the result and performance?

“Probably what most people would make of it, seeing the game.

“They were going to react, there was no doubt about that.

"They are probably as big a Championship team as I've seen, and they play a certain way, which has been very beneficial for them. You have to be able to cope with it.

"It's a tough task when you are generally a smaller team - and in some areas, a lot smaller.

"But in a period of probably 15 minutes where they ramped it up - and went very, very direct - there were moments we just didn't cope with.

"The only way you can cope with that is by ourselves being better on the ball and getting that second goal.

Do you have the players in your squad to turn results around?

“Up until this moment, that hasn’t been the case.

“We have brought players in. Some have come very late in the window and some I haven’t had the opportunity to work with yet. We have two players (Braian Ojeda and Mohamed Drager) at this moment who will miss the next two games.

“It’s my responsibility to bring them up to speed as quickly as possible, integrate them into the group and start to get results.

“On the other side, it’s still small margins.

“Each of the games we have lost, it’s been one goal. It’s about turning those margins in our favour.

“That means a group of players gelling and getting up to speed as quickly as we can.”

Are you confident you can turn this form around?

“I have a group of players. Our responsibility, in whatever way we do it, we have to get results.

“Whether that’s on Wednesday night, if we don’t play well but get a result, whatever way it comes, we have to get results.

“That means players stepping up to the mark. That means a group of players gelling together and doing enough to get results.”

Are you tempted to change something to try to do that?

"I don't think anyone can accuse us of not fielding a team that had enough offensive players in there to get results.

"When you're playing four offensive players and you've got full-backs who you know can break forward as well, it's not about formations, for me.

"The next one will be a different type of game to this one; we've got to be up for it."

Do you think you'll get enough time from the club to work with this group of players?

"It's not something I think about.

"I've been in this game a long time. The tougher things are, the harder you work and the more you think of ways you can change things.

"We have a squad of players, and it will be this group of players who will have to get us results.

"The window has closed now, and I don't think there will be any more additions.

"It's about making sure we show more of the good aspects we've shown in games - and less of the bad parts.

"Each one of these players will have been in difficult positions before. They know this league. They know what it takes. We've got to start showing that."

Is there any chance of bringing any free agents in?

"Because of the numbers we have in the squad, that still is a possibility.

"If there is an addition to that, then that will happen.

What did you make of Forest's performance? Have your say in the comments below

Other managers have been linked with your job, is that a distraction?

“First and foremost, anything you’re telling me is news to me.

“One, because the only thing I do is concentrate on the job.

“It’s been a very difficult summer. With the recruitment process we have… yes, thankfully, we brought in players and there has certainly been a change here.

“It’s been difficult not being able to work with some of those players earlier in the pre-season, but it’s been a very difficult window for most.

“I only think about the next game.

“It’s a hugely disappointing result. And one thing I can tell you is I’m as disappointed as anybody.

“This is the job I do. I’m only thinking about how we get a result on Wednesday night, because this club deserves it. The supporters deserve it.

“I’ve got a group of players here who desperately want to get a result as well, but we have to go out and prove it.”