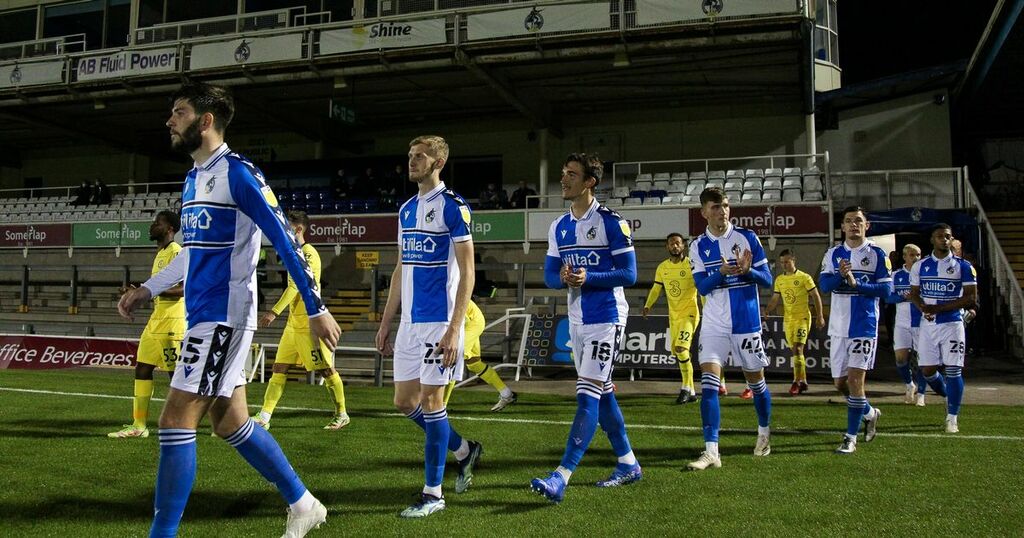 Kev, what did you make of that performance?

Some good bits. I thought in the first half we showed some good moments. We take the lead through a good goal from Luke and you’d like to think we’d carry on with that and keep taking it forward.

But we seemed to sit back a little bit and let them have a lot of the ball, and they’ve got good footballers so they’re going to hurt you.

It seemed that for large spells they didn’t seem to be causing you many problems, but second half it went a bit of a different way ...

Yeah, we were fairly comfortable until they scored before half-time and then we just lost our way a bit.

We didn’t really get going in the second half but we knew there was going to be a drop off. Luke Thomas, Sammy Nich was coming off, so we knew the changes were going to happen.

But, that’s what happens, you give people minutes and players that need minutes. We had players coming off the bench and getting debuts, so there’s that side of it which is pleasing.

Did anybody sort of stand out for you, or anybody put their hand up?

Yeah, I thought Niall (Lovelock) in the first half did very well. Some of his passing was very good, looked very composed. The pleasing thing is that Luke Thomas got through and you can see what he’s capable of with his goal.

And then moments in the second half when he’s cutting inside, you’re thinking here we go. That’s what you want from him all the time, every time he gets the ball we want him to be positive.

So, that was pleasing. I thought Jed was very good in goal, he made some good saves. Listen, there’s positives but no one likes losing games especially at home. We always want to win.

I was going to pick out Luke Thomas. I thought he carried a real threat, is this the difference when you see him fit is that what’s happened between now and three/four weeks ago?

Yeah absolutely. He’s got to realise what a player he can be when he’s positive and as soon as he turns and gets on the front foot and starts getting at people.

He’s going to be a massive player for us, but we need more of it from him.

He’s not somebody who actually draws creativity. He hasn’t scored many goals in his career, so maybe that will give him a real boost of confidence?

Yeah, hopefully. I think second half as well when you see him cutting in everyone is thinking ‘oh here we go’. He’s got the ability to do that and hopefully he can add more goals to his game and hopefully the fitter he gets and more minutes he plays, he’ll do that.

And Jed, is one of those where he’s picked the ball out of the net twice, but he’s pulled off four or five really good saves…

Yeah, absolutely. We’ve got high hopes for him. Tony (Warner, goalkeeper coach) does a lot of work with him. He’s a good keeper Jed with a great attitude. He’s one we’re looking at and hopefully he’ll progress nicely.

The changes that you mentioned, were they pre-planned in terms of the senior players always going to play 60-odd minutes?

Yeah because with the game on a Wednesday night going into Saturday away game. We’ve got travelling again to Colchester (on) Tuesday.

So, always that in mind. Sammy needed to get a certain amount of minutes same with LT and same with Trevor so that was always pre-planned.

It seemed as well that Trevor got one of those typical cramp injuries when you’re just coming back after such a long time out...

Yeah absolutely. What you can’t do is risk him or put him in places that he doesn’t need to go to. We have to look after them first and foremost and we have to look at the bigger picture.

I suppose Chelsea in the last 20-25 minutes showed that technical composure to keep you at arms length most of the time...

Yeah, they’re going to do that. They keep the ball ever so well and they’re technically very good. Disappointment that we couldn’t force a bit more in terms of goal mouth chances and opportunities to try and get one back and get a draw possibly take it to penalties.

But, some positives out of it. We don’t want to lose but the bigger picture as I say is that we got players through.

And with some of these youngsters. You mentioned Lovelock did very well and he was on from the start, a couple of the others came on and had good impacts. Are they still a way away from forcing them self into the first team picture for league matches. How do you see it as a progression for them?

Yeah, I think it is a progression. Some of them may be a little bit away from it but you see Jay (Jamarni Langlais) come on and he looks like he’s a handful for any defender with the size of him.

But there’s a lot of work that needs to be done there to say ‘right, you’re going to go into our first team’. But hopefully as they grow and spend minutes with us they’ll do that.

Tom Mehew is a player who has done well when he’s played but he’s one of these where it’s hard to get him opportunities, how do you think he got on? And where do you see him in his progression, does he need a loan do you think?

Possibly, that’s something we’ll discuss. Like you say with how many minutes he’s actually played.

He’s at the age where hopefully he wants to play minutes but it’s hard to get him minutes when there’s not a regular amount of games for them.

I think clubs right across the country will have that with players of that age, so it is difficult for him. But any time you get a chance you’ve got to try and grab it.

Yeah, absolutely. It’s difficult for them, I get that but they (chances) come few and far between sometimes and you have to grab them.

It is difficult for the boys, we understand that. We want them to play more minutes but at the same time you’ve got to grab the chance when it comes.

Luke did take a knock in the game, he’s obviously had ankle problems he’s just felt something there and perhaps he was a bit over-cautious about it...

Yeah, I think that’s just a little impact injury during the game and he was okay with it no problem.

You guys must be delighted with how his responded, because Joey really did lay a marker down to him and was quite public in his message that he’s got to go and work hard, he seems to have responded brilliantly to that message

Yeah and you can see from tonight what he’s capable of but we still need him to give us more.

We want him in the team but that’s got to come from him as well. But everyone is really pleased with how he’s responded and you know he’s worked hard and hopefully he’s going to grab a chance when it does come.

I guess the focus is now all on two massive away games, these two are tests where you can go and prove that you have progressed in recent weeks…

Yeah definitely. They’re tough away games but hopefully if you can come away with some points it puts a marker down that as you say we’re starting to pick up.

Can I just ask about Kieran Phillips; a prolific goalscorer in the development setup he’s come through and gone on loan as well, is there a good chance of him making a matchday squad given the goalscoring problems that you’ve had?

Possibly, I think there’s an opportunity for all of them if they want to grab it. It’s not just going to be given to you.

I think they have to show that when they train or if they go on loan. Go grab it, it’s up to you. If you show enough then you might get a chance.