Ever wondered what happens to your COVID-19 swab once it leaves your nose? 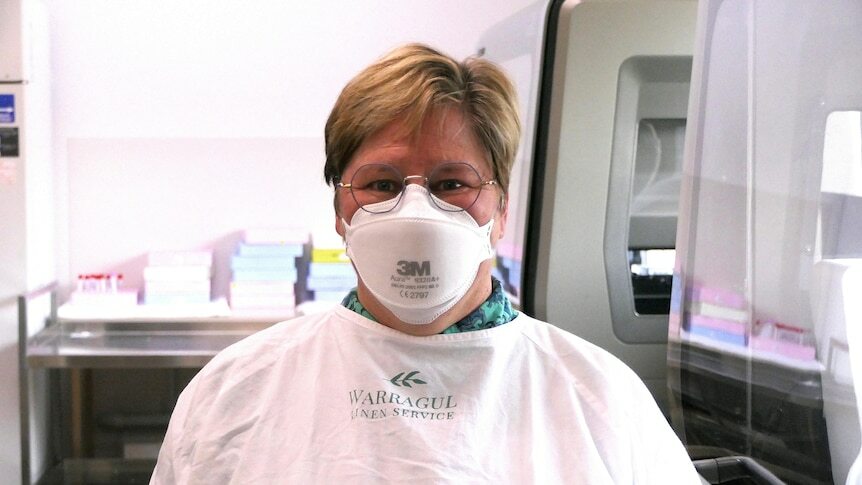 Chances are, some time over the past 18 months you will have had a stick stuck up your nose to test for COVID-19.

Hundreds of thousands of Victorians have and, by this week, the state has  completed a whopping 10 million tests.

But what actually happens after your sample leaves the testing site. And what has changed since testing started 18 months ago?

The ABC was allowed to follow a swab to find out, and to meet the people who make it happen along the way.

First, of course, it is the famous stick — down the back of the throat and up both nostrils.

If this feels a bit better to you now than it did in the early days, you might not be imagining it.

Mid last-year, health authorities allowed swabs to be collected from lower down the nasal passage.

Staff have also moved from writing down people's details by hand, to entering them into a digitised, centralised system.

Suja George, assistant nurse manager at the Clayton COVID-19 testing site, said her staff were still excited by their work.

"We always check with each other 'How are the numbers? How'd we do today?'" she said.

The mix of registered, enrolled and student nurses rotate through roles — either doing the swabs, triaging people or taking details.

On their busiest day, they have conducted more than 1,700 tests here. At the moment they are averaging about 500 a day.

Courier Ben Tawflis has been ferrying COVID-19 tests from testing sites to Monash Hospital for the duration of the pandemic.

He works seven days a week, going between the sites and the hospital five times every day to deliver his precious cargo.

"These people rely on me to pick up their samples, secure them in my van and get it to Monash Hospital to pathology so they can get their results come in straight away."

Once he arrives at the hospital, he passes the screening test and delivers the tests up to level four to the laboratory.

"People say, 'Thank you for your help.' It is nice to get a tap on your shoulder. Yeah, it's pretty good," he said.

Once the swabs arrive, they are scanned into a computer to marry them with the details collected at the testing centre.

The lab is a flurry of activity.

Now they have 34 staff working around the clock.

"We used to be in two little labs but … we're in about six rooms now, and we're even expanding further," senior scientist Michelle Francis said.

Ms Francis, who oozes enthusiasm for her work, said she had never seen anything like this in her 17 years at the lab.

"Back in 2019, Victoria had a [bad] flu season, and we thought at Monash Pathology that 200 flu samples a day was a lot of testing."

It's a revolution that's happened across the state. In May 2020, Victoria conducted 100,000 tests in two weeks. Now that's easily done in two days.

The samples are loaded into a Nimbus machine, an instrument that extracts the nucleic acid of any COVID-19 virus that is present in the samples.

Before the machine arrived in November, the lab could only process 24 tests in that time.

Once the swabs have been purified in the Nimbus, they go into an amplifying machine that can detect levels of COVID-19, a process that also takes around three hours.

"We're [then] going to get a results sheet that tells us which of our patients are positive and which are negative," Ms Francis said.

"Any patient where we get amplification of SARS-CoV-2 is indicative of a positive result."

People who have negative swabs are automatically sent a text message, while positive swabs are tested again to make sure the result is correct.

Monash Pathology is detecting 10 to 20 positive tests a day, out of roughly 2,000 samples.

"We've seen so many now, you become a bit detached from it all. But when you see young children, or you see the elderly or you see a suburb you haven't seen before …" Ms Francis said, her voice trailing off.

"There's just great awareness within my staff that this pandemic is spreading again at the moment, and we've got challenges ahead."

Monash Pathology general manager Kristy De George said the lab had gone from turning results around in up to three days at the start of the pandemic to 12 hours or faster.

A new machine just acquired by Monash, the "Panther", should make the process even faster again, producing a test result in just three hours.

"I'm so proud of everything we've done here, so proud of the team and how quickly they've had to adapt and go with rapidly, rapidly innovating the way they're doing things."