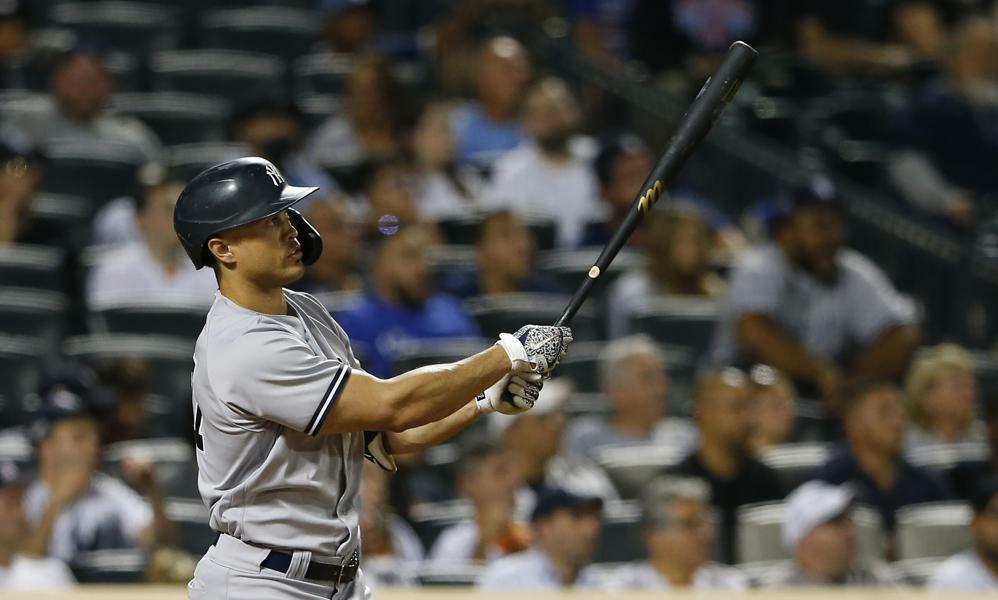 At some point during the four hours, six minutes it took for the Yankees and Mets to play the finale of the Subway Series on Sunday, the ESPN broadcast mentioned how the Mets thought the Yankees were whistling on Saturday in an attempt to provide tips for Taijuan Walker’s pitches.

Then Francisco Lindor placed a hand in front of his mouth while rounding the bases for his second homer in an obvious reference to what had just been mentioned on national television.

Business picked up well as much as it does these days when the teams wound up milling around in the seventh during the longest nine-inning game between the teams.

The mere standing around on the field occurred when Giancarlo Stanton reacted when he homered off Brad Hand, the 63rd player used by the Mets this season. Stanton’s reaction was a slow trot after rounding second, turning his back towards third base and shouting at Lindor. This led to Javier Baez waving at Stanton and Brett Gardner appearing to give Baez the thumbs down.

Gardner’s apparent reaction in the milling around was a clear reference to what happened two weeks ago (checks notes was that two weeks ago) when Baez homered and gave a thumbs down to the fans for booing him. As absurd as Baez’s gesture was consider that it came in a game where the Mets played one of the best games of the second half and actually won.

So, what exactly is the cause of “whistlegate”? Well, it depends on who you believe.

On the Mets side, Lindor seemed to think something shady was happening though he was not sure.

“I can't accuse them of whistling for the signs because I'm not 100%" Lindor said. "But I know what I heard and I felt there was something out of the ordinary going on."

As for the Yankees, their response to questions seemed to come out of the excuse rolodex. As various figures spoke after the marathon, the reason for any alleged whistling went from just being noisy in the dugout to a reliever actually whistling to create energy.

"The last couple nights, we’ve just been loud over there. Not doing anything,” manager Aaron Boone said.

If you got a problem with Wandy, give it to Wandy,” Stanton said. “Don’t be talking to multiple people, bringing everybody into it, especially running around the bases, was my thought process,” Stanton said. “Obviously, I didn’t get all of that out.”

Stanton did not but when he was done with his explanation Joey Gallo came in and invoked a more specific claim about Peralta.

It's just Wandy trying to liven up the dugout,” Gallo said. “It's definitely not for pitch-tipping or anything like that. It's just him trying to bring energy to the dugout. It's been hurting my ears, honestly."

Sunday’s chapter is the latest in what has been a remarkably eventful season for various between the two teams, who have combined to use 121 players and have rode extreme highs and extreme lows in displays of streakiness.

To review, the Mets created a fictional hitting coach “Donnie Stevenson” days before firing an actual hitting coach in Chili Davis. Then they had two middle infielders in Lindor and Jeff McNeil get into an argument about who should have fielded a ball before claiming the heated discussion was about whether they saw a rat, raccoon or a possum.

Those events were occurring as the Yankees started with 11 losses in 17 games and then won 22 of their next 31. Then they stumbled to 41-41 with an array of “worst losses of the season”, including the events of June 30/July 1 and July 4.

On June 30, the Yankees resumed play after a two hour rain delay against the Angels with a four-run lead. By sometime after 1 a.m. it was an 11-8 loss when Aroldis Chapman allowed a grand slam to Jared Walsh and the Angels scored seven times in the ninth.

That preceded managing general partner Hal Steinbrenner putting the onus on his players and GM Brian Cashman saying the Yankees were “as bad as you can be”.

In the immediate aftermath of blowing a seven-run lead, the Yankees were nearly no-hit by Walker, the same pitcher who they were accused of trying to tip pitches from. Then came the six-run seventh by the Mets highlighted by Pete Alonso’s homer off Aroldis Chapman.

That dropped the Yankees to .500 and was part of a stretch where the Mets held first place for 90 days until running into a schedule that had them playing 13 straight games against the Dodgers and Giants and not surprisingly is it did not go well. In fact, it went badly with a 2-11 record but somehow the Mets somewhat recovered and are in contention for the second wild card spot.

While the Mets were stumbling against NL West powerhouses, the Yankees won 13 in a row and seemingly secured an assurance of one wild card spot. It was their longest streak since 1961 and highlighted by an array of close wins, the same type of games the Yankees often failed to secure earlier this season.

Then hours before the Yankees lost the second game of their current 3-12 slide that knocked them out of a wild card spot, Baez decided to give the thumbs down to the fans who booed him for hitting .210 in his first 62 at-bats while mixing in an injured list stint after being acquired from the Chicago Cubs.

Two days later, he was scoring the game-winning run to beat the Miami Marlins and his earring fell off in the celebration, resulting in the mystery of where his earring wound up. It was such a mystery that Sandy Alderson was among those conducting the search.

Of course, Alderson’s detective work in the case of Baez’s missing jewelry paled in comparison to what was revealed a day later when acting GM Zack Scott was cited for drunk driving in White Plains coming back from a fundraiser at new owner Steve Cohen’s house. This was revealed as the heavy rains from Hurricane Ida pelted the New York area, including Yankee Stadium where announcers were calling a road game from Anaheim.

When the Yankees came back from the West Coast in the aftermath of the fierce storm, they struggled against the Baltimore Orioles, losing a pair of one-run games. In one of those they were held hitless for 6 1/3 innings, at least they were until Thursday when an official scoring ruling of an error was overturned and Aaron Judge was awarded a double.

This was in the midst of the Yankees never holding a lead and getting utterly dominated against the Blue Jays and their array of young sluggers, including Vladimir Guerrero Jr, who is up to 44 homers.

These games were compelling and made a case for the crosstown teams playing six times a year every season. They also continued the unique roller coaster of New York baseball where every game is like one 162-game season, something seems more apparent in the wild swings of a season that will go down as memorable even if it ends unsuccessfully for both teams.