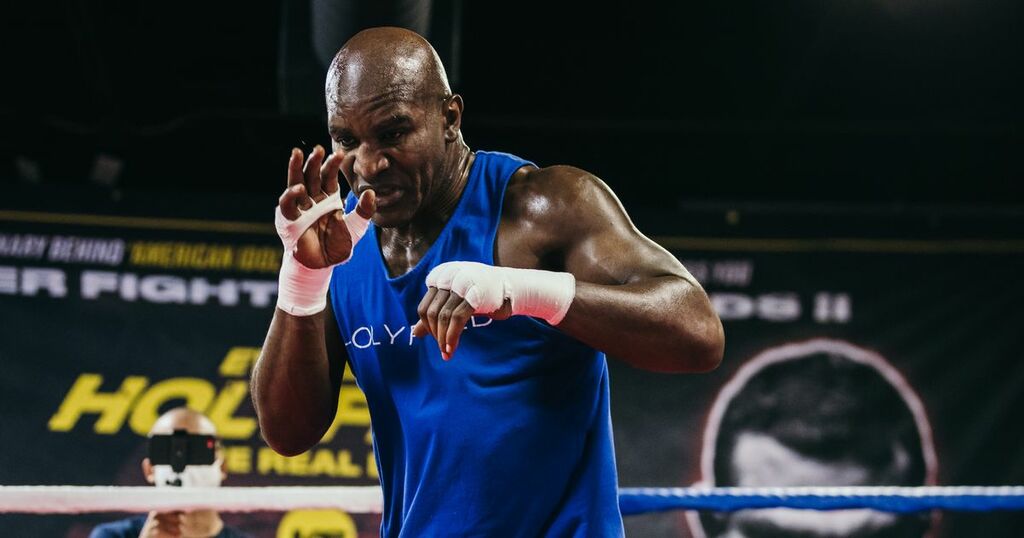 Holyfield stepped into the clash with former UFC star Vitor Belfort at late notice, after Oscar De La Hoya was forced to withdraw from the clash after being hospitalised with coronavirus.

And the legendary heavyweight will make his first appearance in a boxing ring since his victory in Copenhagen in 2011, at the age of 58.

Fans are notably concerned after a video emerged on social media of Holyfield's work out which fans labelled him looking "far from sharp".

"This is going to end horribly," another wrote.

While one fan appeared to defend Holyfield: "But he isn't looking sharper than ever, he just doesn't look terrible."

Holyfield signed with Triller initially with the plans to fight former rival Mike Tyson, before his fellow heavyweight walked away from the label after his exhibition with Roy Jones Jr.

But despite his next opponent not being Tyson, the 58-year-old believes he is in "good shape" and revealed he has been training for "two years" in anticipation of his ring return.

“When Oscar De La Hoya came down with Covid they asked me to fight Vitor Belfort," Holyfield said. "Training is what I do, like I tell the young people if you do things right, it will work out for you, that works for older folks too.

“Boxing is a game and I know how to prepare for it against Vitor Belfort. I’m sure if I was getting in his game, I’d be in trouble but he’s getting into my game so he’s in trouble.”

“I’ve been training for over two years because there were fights mentioned against other fighters. I realise now as I prepare to face Belfort I’m in good shape and I don’t get out of shape.”

“It’s not so much that I miss it but people always ask about Mike Tyson and I fighting. They’ve offered so much money that I would definitely take a chance against someone I’ve already beat, I think I look alright but this is after two years of solid training.”

Belfort will now have to deal with a late opponent change ahead of his appearance on the card, who he is notably much smaller than in terms of size.

But the Brazilian remains confident that he will be able to handle the power of his opponent and has branded himself a "lion".

“I don’t see the change in opponent as a problem, I see it as an opportunity," Belfort said. "And this is a huge opportunity for me to face a legend like Evander Holyfield.

“In boxing there’s too many big fights that aren’t happening. Oscar and Evander truly built the sport of boxing during their careers. Evander’s a hall-of-famer and I’m very excited to be fighting him.”

“The king of the jungle is the lion, not the elephant, I’m smaller than Evander but I’m the lion. Speed and power are more important than size.”

“It’s about hit and don’t get hit, I know how strong Evander is. It’s about fighting a smart fight on Saturday night.”