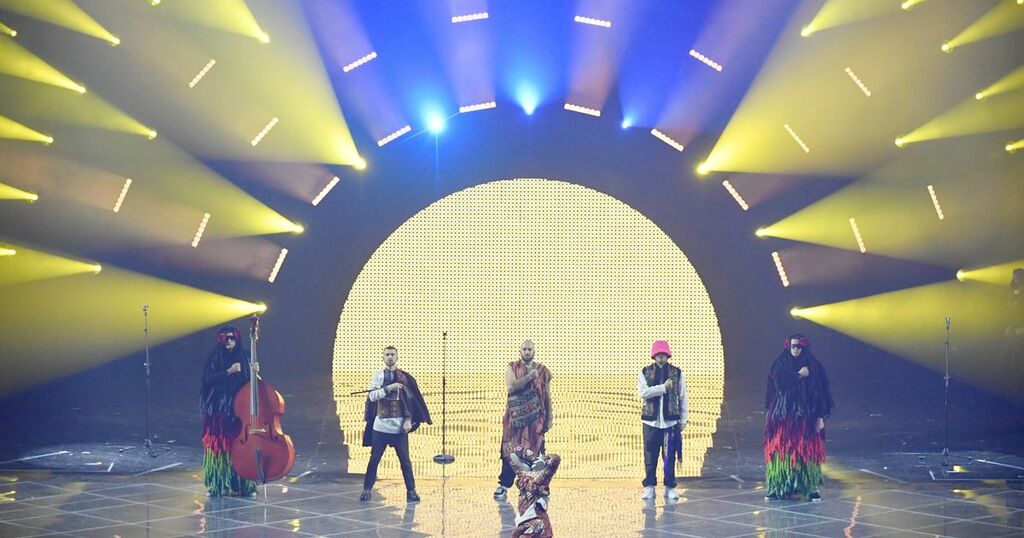 Eurovision 2022: Ukraine has viewers 'in tears' with poignant performance
Up until recently, Ukraine did not know if it could take part in the competition

Kalush Orchestra's Oleh Psiuk tells NPR that representing Ukraine on the world stage is a huge responsibility. He hopes people…

'Everyone should play their part in the war effort'

Sports Illustrated
From analysis to good news, read the world’s best news in one place
'Ahsoka' will be different from 'The Mandalorian' in one important way

Inverse
Sydney I Hope You’re Showered, Trimmed Moisturised ‘Cos Ryan Gosling Is Moving Down Under

Eurovision fans were left emotional as Ukraine's Kalush Orchestra asked for help for their home country.

The rapping act are favourites to win this year's competition, as fans of the Eurovision Song Contest rush to back the group amid the devastating crisis happening in their home country.

The group - made up of rapper Oleh Psiuk, Ihor Didenchuk, dancer Vlad Kurochka, and singers Tymofii Muzychuk and Oleksandr Slobodianyk - were given special permission to head to Turin, Italy to compete as men of their age had been called by the country to fight against Russia.

Fans tuning into watch the group perform were clearly emotional as they praised the performance, specifically as the lead singer called for help for those in Mariupol, Ukraine.

"Well #UKR was strong, felt emotional. If it wins fair play, it really is the least Europe can do. That said, it’s not a forgone conclusion. Either way, how wonderful to have them on stage tonight - and so important," one fan wrote.

A second added: "Absolutely fantastic from #UKR #Ukraine I would like them to win on an emotional level. The country deserves it after everything they’re going through , plus it’s a good song. #Eurovision," as a third wrote: "Okay, new favourite is #Ukraine! Yes, strong emotional resonance but also brilliant song, lovely fusion with folk music. #Eurovision #UKR #Solidarity."

"It must feel especially emotional for them to be representing Ukraine when so much is happening to their homes. #UKR #Eurovision," a fourth penned.

During the performance, Vitalii Duzhyk plays the traditional Ukrainian flute instrument, which is called the 'spolika'. It has also been revealed by the group that one band member dropped out of the performance so that they could remain in Ukraine and fight for their country on the front line.

Whilst the song does not directly reference the war, there are some lyrics in the song that have become even more poignant following the devastating events happening in Ukraine.

The band describe the song as a way of "showing off" their roots.

"We’re showing off our roots, and we’re showing how to take something from the past and make it work for the present," the band explained, "That’s why we’ve found success at home, and we hope that we can find that sort of reception internationally, as well. We take something old, and we make it sound modern."

UkraineEurovisionKalush OrchestraEurovision Song Contest
Sign up to read this article

Eurovision 2022: Ukraine has viewers 'in tears' with poignant performance
Up until recently, Ukraine did not know if it could take part in the competition

Kalush Orchestra's Oleh Psiuk tells NPR that representing Ukraine on the world stage is a huge responsibility. He hopes people…

'Everyone should play their part in the war effort'