Elaborate staging, wacky costumes, and an abundance of great songs: Eurovision is a song contest like no other.

But Europe’s annual competition is so much more than a kitsch peculiarity: artists including Abba, Maneskin, Olivia Newton-John, Mahmood and Celine Dion have all achieved worldwide fame since performing on the Eurovision stage.

Though it began as a song-writing contest in 1956, having a strong and unique performance is just as important on today’s Eurovision stage. Balancing impressive vocals, skilful songwriting and visually interesting staging, this list ranks the Eurovision winners that found the sweet spot.

Alexander Rybak’s performance of the saccharine, folky “Fairytale” from Norway ticked all the Eurovision boxes: a catchy tune, good vocals and exciting staging (with backflips and pyrotechnics to boot). Fittingly, then, it achieved Eurovision’s biggest landslide win on record.

The opening story-telling style emulated the fairytale theme, with Rybak belting “I’m in love with a fairytail” in a clear voice between endearing, dimpled smiles. As the dancers performed the folk dance halling behind him, Rybak sang with expressive gestures and played the fiddle, creating just the right amount of novelty to please the Eurovision audience.

The 2021 competition saw Italian glam rock band Måneskin take the grand prize – the first Italy contestants to do so in over three decades – with their track, “Zitti e Buoni”. Translating to “Shut Up and Behave”, “Zitti e buoni” caterpaulted the band to global fame and was the first Italian-language song to break into the UK Top 20 in 30 years.

It was a true rock performance, complete with flashing strobe lights, raining pyrotechnics, slick guitar riffs and lead singer Damiano David’s gritty vocals. The lyrics – the chorus “Sono fuori di testa ma diverso da loro / E tu sei fuori di testa ma diversa da loro” translating to “I am out of my mind, but I’m not like the others / And you are out of your mind, but you’re not like the others” – emulated the quintissential rock sentiment of sticking it to the generation who came before you.

But it was the dominating stage presence and alluring confidence – particularly that of David – that cemented Måneskin’s place on this list. And that’s without mentioning the matching lace-up leather suits and platform boots designed by Christian Louboutin.

✕
Eurovision: Brotherhood of Man 'Save Your Kisses for Me'.mp4

Capitalising on the “Abba effect”, Brotherhood of Man’s “Save Your Kisses for Me” was a winner for its catchiness and simple but effective performance.

Led by Martin Lee’s smooth vocals, the group performed a peppy, neatly choreographed dance to accompany their cheery tune. When Lee sang “I love you”, he was backed by mesmerising vocals. The song was a masterclass in effortless Eurovision cheer, with a touch more lyrical depth than, for example, Teach In’s equally catchy “Ding-a-dong”, which won for the Netherlands a year earlier. The earworm tune is a hallmark of Seventies Eurovision success stories, with the melodic chorus leading into a surprising final twist: the song’s “baby” is not a lover, but a beloved child.

The lyrically and melodically catchy “Only Teardrops” complemented the global rise of folktronica – epitomised by Avicii’s “Hey Brother” released later in 2013 – by incorporating traditional Danish folk elements into the song. It achieved a high of No 15 in the UK charts, and is the UK’s seventh most downloaded Eurovision song to date.

Forest, aged 20 at the time, led the song with an endearing smile. At times, it almost felt like a duet between Forest and the flute player as they held each other’s gaze. Her hand gestures were strange, but captivating, as was the fiery screen projected behind her. It made for an intriguing performance soundtracked by a Top 40-worthy hit.

If this list were based on subsequent success alone, Celine Dion would top the list. As a Eurovision performance, however, Dion arguably lacked the effervescence of other entries – though she was still a marvel to watch. Trusted on the stage alone at only 20 years old, Dion pulled off a win for Switzerland with self-assured and impressive vocals, expressive hand gestures and a slight side-to-side sway to the rhythm. The lack of fancy staging could easily be forgiven: she didn’t need it.

Growing from her previous local Québécois success, the performance – and subsequent win – catapulted a young Dion to international acclaim. It could have been a very different story: “Ne Pertez Pas Sans Moi” holds the Eurovision record for closest win in history, beating the UK’s entry, “Go” by Scott Fitzgerald, by only one point.

✕
Eurovision- Bucks Fizz performs 'Making Your Mind Up' for the UK

Another infectiously peppy UK entry, Bucks Fizz took the lead from Brotherhood of Man, winning with another group of four. Though similarly lined up behind standing mics, Bucks Fizz somehow injected even more pep into their tune, with bright, block colour outfits and synchronised dancing: hand claps, side-to-side hip swaying, spins, bees’ knees, and even a mid-song rock’n’roll dance break.

It was a song of verbs – opening, “You gotta speed it up / And then you gotta slow it down / ‘Cause if you believe that our love can hit the top / You gotta play around” – with the title line ending almost every verse. Most notable, though, was the iconic skirt pull. As Mike Nolan sang “You try to look as if you don’t care less / but if you want to see some more”, he and Bobby G pulled off Cheryl Baker and Jay Aston’s long skirts to reveal shorter skirts underneath. That moment alone was enough to secure Bucks Fizz’s spot in Eurovision history.

Conchita Wurst’s “Rise Like a Phoenix” solidified the contest’s place at the forefront of representation and equality, following in the footsteps of Dana International’s 1998 winner for Israel with “Diva”.

“Rise Like a Phoenix” was gloriously dramatic, a power ballad worthy of soundtracking a James Bond film. As Wurst sang “Rise like a phoenix / Out of the ashes seeking rather than vengeance”, wings of fire appeared on the screen behind her. She was powerful and elegant, with strobe lighting and swelling orchestral music surrounding her at the song’s climax. Spectacular.

Eurovision scrapped their rules against groups in 1970, opening the door for Abba to triumph a few years later. Fresh-faced Frida and Agnetha bounded onto the stage to sing the song’s opening lines: “My, my / At Waterloo, Napoleon did surrender”, after their conductor, fellow Swede Sven-Olof Walldoff, entered dressed as Napoleon. Accompanied by bandmates Björn and Benny, their outfits were characteristically wacky – with Agnetha in knee high gold platform boots and a blue silk costume.

“Waterloo” itself was a lyrical masterclass, and Abba’s catchy melodies and clear, jubilent vocals secured Sweden’s first Eurovision win, catapulting the group to global stardom. Their performance became a template for Eurovision entrants for years to come.

“Hard Rock Hallelujah” is one of Eurovision’s most memorable performances, securing Finland’s first win in 45 years. Lordi’s rock hit proved that the strongest entries draw on their nation’s musical strengths: Finland has more heavy metal musicians per capita than any other nation.

Before Lordi, rock bands didn’t have much success in the competition, but that all changed in 2006. Their lead singer’s gravelly voice was accompanied by soaring backing vocals, elevating the performance to epic status. Likewise, dressed in monstrous prosthetic costumes, the band embodied the hit, which calls all “rock ‘n roll angels [to] bring thyn hard rock, hallelujah” in a gothic rock sermon.

This was especially effective when Lordi sang: “Wings on my back, I got horns on my head / My fangs are sharp and my eyes are red”, describing his monstrous garb while giant wings rose from his back. Incorporating classic metal imagery at a show known for its outlandish costumes and love of a good gimmick felt like a stroke of rock genius.

“Euphoria” rightfully earned Sweden their fifth Eurovision win (and their second spot on this list). With the help of a wind machine, Loreen performed a Kate Bush-style dance across the length of the stage. During the bridge, confetti arrived in flurries as she was joined by another dancer for the electric final chorus.

In a year that began with Flo Rida’s “Good Feeling”, David Guetta’s “Titanium”, and DJ Fresh’s “Hot Right Now” dominating the UK charts, Loreen’s Eurodance track fitted in perfectly. With 18 countries awarding her performance douze points – the highest number in the contest’s history – the track became a global hit, even breaking into the UK Top 3 ( the first non-UK Eurovision entry to do so since 1987). It has since become Eurovision’s most downloaded track ever, ahead of Abba’s “Waterloo”. 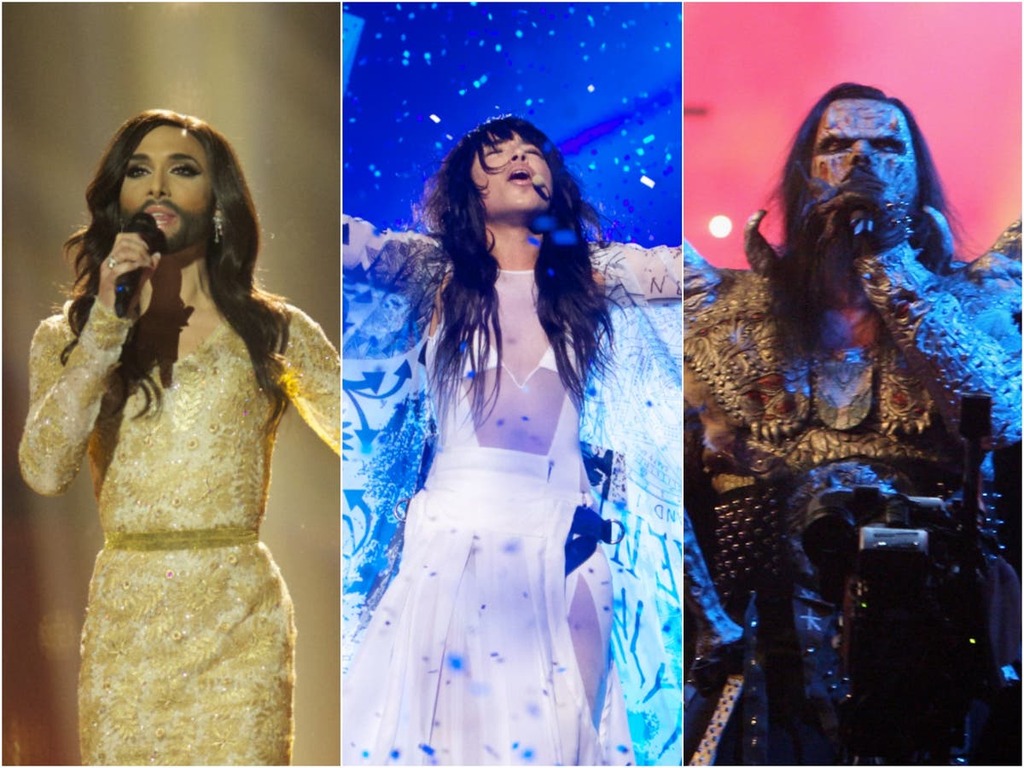 Eurovision 2022: The best 10 winning performances
In its 66-year history, few Eurovision entrants have achieved both a great song and a great live performance. Olivia Emily…

Ukrainian group Kalush Orchestra wins the 2022 Eurovision Song Contest, finishing 193 points ahead of the competition with their folk-hip-hop…