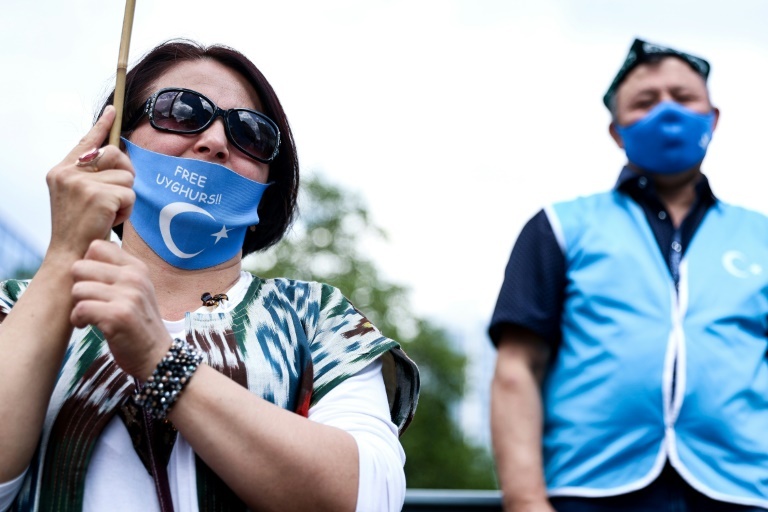 Strasbourg (France) (AFP) - The EU is looking to impose an import ban on products made from forced labour, the bloc's chief said on Wednesday, in a move seen aimed at China over its treatment of its Uyghur population.

The announcement was one of several made by European Commission President Ursula von der Leyen in her annual State of the European Union speech that signalled a more assertive stance towards Beijing.

More explicitly, von der Leyen called on Chinese President Xi Jinping to show "leadership" by setting out in detail how his country -- the world's biggest emitter of greenhouse gases -- plans to meet its climate change goals ahead of a UN COP26 summit in early November.

She also outlined EU plans to set up trade and infrastructure links in other parts of the world -- including the Indo-Pacific region where China dominates -- to rival Beijing's "Belt and Road" initiative.

The stance underlined a hardening Western approach to China, which has become an economic powerhouse that competes with the US and EU while eschewing their democratic and social values.

Yet Brussels is also keen to portray its moves as independent and less hardline than those from Washington, with which Beijing has more tense relations.

Human rights 'not for sale'

On  the forced labour issue, von der Leyen did not mention any country by name, but allegations that China is using sequestered Uyghurs in its Xinjiang region to make products for export are becoming a key issue in EU-China ties.

In von der Leyen's native Germany, rights activists this month filed a criminal complaint against five retailers, including Hugo Boss and C&amp;A, accusing them of benefiting from Chinese state abuse of Uyghurs.

Von der Leyen said in her speech before the European Parliament that while the EU strongly backed global trade, it "can never be done at the expense of people's dignity and freedom".

"There are 25 million people out there, who are threatened or coerced into forced labour.We can never accept that they are forced to make products -- and that these products then end up for sale in shops here in Europe," she said.

"So we will propose a ban on products in our market that have been made by forced labour.Human rights are not for sale -- at any price."

On climate, von der Leyen singled out China's leader by name, urging him to make concrete announcements on what his country will do to help the world limit global warming to 1.5 degrees Celsius before the COP26 in Glasgow on November 1 and 2.

"The goals that President Xi has set for China are encouraging.But we call for that same leadership on setting out how China will get there," she said.

"The world would be relieved if they showed they could peak emissions by mid-decade -- and move away from coal at home and abroad."

Then, in a clear swipe at China's Belt and Road plans, von der Leyen talked up Europe's own project to build trade, infrastructure and supply-chain links, starting with the Indo-Pacific region, that includes much of Asia where China is bolstering its own trade routes, as a "template".

That "reflects the growing importance of the region to our prosperity and security -- but also the fact that autocratic regimes use it to try to expand their influence," she said.

"It does not make sense for Europe to build a perfect road between a Chinese-owned copper mine and a Chinese-owned harbour.We have to get smarter when it comes to these kinds of investments," she said.

The EU, she said, will soon unveil a "Global Gateway" strategy that she said would take a "values-based approach, offering transparency and good governance to our partners" to build links around the world to ensure it was "a trusted brand".

The initiative, she said, will be a "priority" in regional summits, beginning with an EU-Africa summit in February.