EU Peace funded Forth Meadow Greenway will "create barrier" between communities not connect them, council told 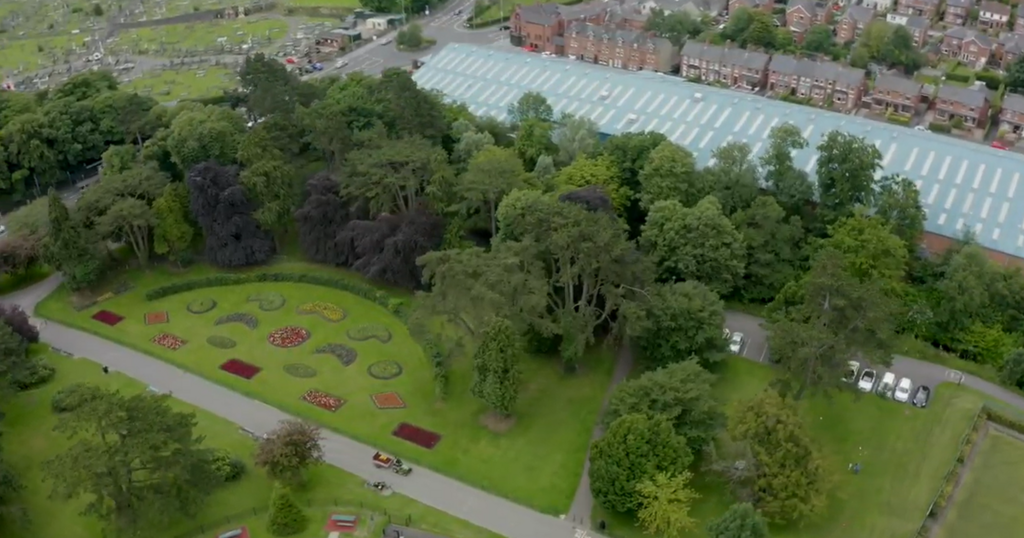 The latest stage of a cross-community peace fund greenway in West Belfast has been council approved – despite elected representatives being told by a human rights charity it will “create a barrier between communities”.

At Belfast City Council’s Planning Committee meeting on Tuesday the Participation and Practice of Rights group also said part of the former Mackie’s site involved in the creation of the Forth Meadow Community Greenway had been earmarked for social housing in 2015.

However, councillors green-lighted section two of the greenway plan.

The £5.1million project is funded by the EU Peace IV programm, and will connect existing open spaces in North and West Belfast along a 12kilometre route from Clarendon Playing Fields to the new Transport Hub in the city centre.

But PPR have objected to the plan stating it “failed to acknowledge that the site is brownfield and capable of delivering development that will address equality at the site in line with the council’s obligations”.

The group pointed out in their letter of objection that 3,000 people in West Belfast are in housing stress with only 401 homes allocated to new tenants and that the Housing Executive had admitted there was “a supply issue”.

PPR's Chloe Trew told councillors up to 1,700 social houses could be built on the site.

She said: “The site where the greenway is now is not the site where it was originally intended to be – it was to be along the Forth River. In a sense what it does is to create a barrier between communities rather than create connectivity.

“It risks sterilising this piece of land for any other type of use, whereas what we see is the potential for thousands of homes to support people in this area.

"We need to really look seriously at this site – when we look at the size compared to other sites in Belfast it dwarfs other potential opportunities in other areas. We need to see a holistic vision for the whole of Mackie's site.”

Marissa McMahon, campaigner and project worker on homelessness initiative between PPR and the Simon Community, also said: “I don’t need to tell anyone on this committee the absolute size of Mackie’s, the potential to have an impact on young people’s lives in various ways.

“We have been working in a coalition with planners, architects, academics, artists, all renowned in their own fields, who see the potential of Mackie’s, who want to build sustainable, equitable, eco-friendly new infrastructure and a new way forward in housing.”

A council officer told the committee the plan for the greenway was “complementary” to any future housing or employment beside the site and would provide “visual landscape relief and amenity space for the residents of new housing”.

The officer explained the proposal would have “a positive effect on community relations” would provide “valuable public space” and have “environmental and ecological benefits,” as well as improving connectivity in the city, and wellbeing through walking and cycling.

Green Councillor Aine Groogan said: “We know the dire lack of social housing we have across the city.

"But in terms of this application – I have been out on site, have seen the topography of this particular stretch, and it wouldn’t lend itself to being built on at all, in my opinion.”

She added a greenway would be a “better use” of the site than housing or employment.

Green Councillor Mal O'Hara said: “Unfortunately I cannot judge this as to how I think it could be better used for something else.

“I am wary of over-densification. We don’t create healthier, happier communities if we just shove housing into every green space that we have. We need green space for mental health, cohesive communities and connectivity.

“If we delay this - this is Peace IV funding - we risk jeopardising the entire greenway project. This is section two of five and it is potentially revolutionary for this part of the city.”

The site to be developed in section two of the project includes vacant land bounded by the Forthriver Industrial Park in the east Springfield Road to the south and Paisley Park and West Circular Road and Crescent to the west.

The area also includes links through the Forthriver Industrial Park to Woodvale Avenue land at Springfield Dam, Paisley Park and the Junction of West Circular Road and Ballygomartin Road.