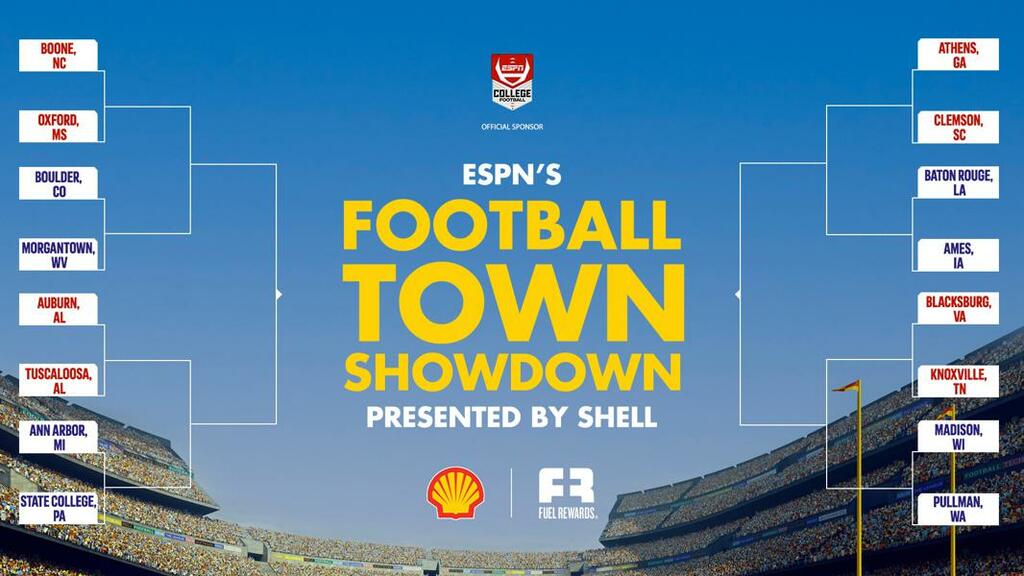 Today, ESPN is announcing its “Football Town Showdown” bracket challenge, presented by Shell. For the next month, fans will vote on their favorite college football town out of the 16 that were preselected for the bracket.

The college football towns included are:

How the campaign came together

The 16 towns were chosen by ESPN’s top ESPN.com and college football editorial teams.

“As some of our premiere college football experts, they’ve visited every college campus across all conferences and hand selected the 16 towns in the showdown,” said Andrew Messina, senior vice president of Disney Advertising Sales.

“What we're doing here with the Football Town Showdown is bracket-style social vote across Twitter, Instagram and Snapchat, giving fans the opportunity to vote on the ultimate college football town,” said Messina. “The fervor behind the college football season is massive. All of us who went to college know the excitement in those towns.”

Messina said the Football Town Showdown was something their internal Sports Solutions Group had been looking at for several years, they were just seeking the right sponsor. Shell’s CMO and general manager of mobility marketing in North America, Lisa Carr, said the campaign is a perfect fit for their brand.

“For us it’s a super exciting partnership because we have our mission of ‘making life’s journeys better.’ With college football, and the passion around football, and how we all get really excited about going back to our college hometowns, this was a perfect opportunity for us to use our national footprint, our loyalty program and our reach to give college football fans that great journey. And also we've got great fuel programs, with discounts on fuel and on snacks. So, it's just a lot of things that we felt like were a great match for us with this idea.”

The social aspect of the campaign was important to both parties. Messina acknowledges that’s where college football fans are easy to reach today.

“When you're talking 10 years ago, that wasn't an aspect of football. Now, you see it every week. The social engagement that we are seeing across the landscape in college football has just added that much more excitement to already a really exciting sport.”

Carr says the social media aspect of the campaign is particularly interesting for her brand as they try to reach new customers.

She also thinks the campaign will be a great way to get consumers interested in the company’s Fuel Rewards program.

In general, Messina said the demand from advertisers with respect to college football is high this year.

“What you see in the college marketplace is that there’s been so much excitement around the return of college football with the fans in the stadium. It drove a lot of advertiser demand early, and for the most part we’re sold out in college football already.”

All voting for the College Football Town Showdown will take place on Instagram, Twitter and Snapchat, although each round will be conducted differently.

For Round 1, fans will vote via Instagram stories beginning on September 15th and ending 24 hours later.

Round 2 will also include voting via Instagram stories for 24 hours, beginning on September 22, but will also add Twitter voting through Saturday, September 25 at 11:59 p.m.

ESPN.com and digital live shows will be driving fans to the social media channels where they can vote throughout the campaign.

The winner of the Football Town Showdown will be announced on October 13.