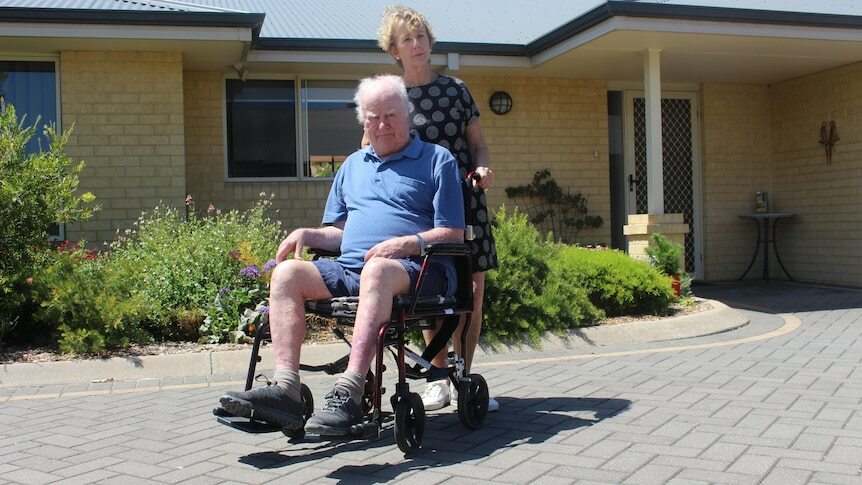 Norman Clark has been living at the Esperance Hospital for five months because the town's only aged care facility is too short staffed to take him.

The 95-year-old moved to the town on WA's south coast with his wife Gladys five years ago to be closer to his daughter Elaine Siemer, with the expectation they would move into the Esperance Aged Care Facility if necessary.

But despite a new, $7 million wing opening at the aged care facility in 2019 and a growing waitlist, 20 of the facility's 94 beds remain empty due to worker shortages.

Living at the hospital is the only alternative, but with the WA border set to reopen soon, daughter Ms Siemer is concerned he will be at heightened risk of contracting COVID19.

"It's a massive concern," she said.

"Hospitals are basically for sick people … he's not ill, he's just not able to care for himself.

"If it's not safe for them to go home, we have an absolute duty of care to look after them and we work hard to balance this with bed flow," he said.

"We have been working with the local nursing home and hope to transition them into care in the next few weeks, however we are equipped to continue caring for them should this change."

Ms Siemer said she had been encouraged to move her parents to another town to access care, but said that was not practical, as she was their only living child and wanted to be close to them.

She said her father was sharing a room at the hospital with one other person, and she took him to visit his wife of 73 years, Gladys Clark, each day, who lives nearby but has dementia.

"They really need attention every day, [and help with] shopping, cooking. It's difficult."

'Give them a hand'

She is now among a group of concerned residents who have organised a workshop for February 7, to discuss concerns and come up with solutions at the aged care facility.

The Esperance Aged Care Facility is among only 30 community-owned facilities nationwide and Ms Siemer said the onus was on locals to try to make it better.

"I don't think the awareness of what's actually happening at our community aged care facility is really out there in the public," she said.

"We want to help the [aged care facility's] board, it's an elected board of community people who do an amazing job.

"They work so hard, tirelessly. We would just like to give them a hand and show them the community is really supporting them."

Ms Siemer said one idea could be to restart Friends of Aged Care, a volunteer group that once raised funds for the facility but had been disbanded.

Toni Hawkins, chairperson of the Esperance Aged Care Facility, said it had struggled to find workers for years, but the issue had been exacerbated by the pandemic.

In May last year, the facility was found to be non-compliant in a range of areas by The Aged Care Quality and Safety Commission, but Ms Hawkins said those issues had now been addressed and it was not impacting on the current shortages.

She said they had employed a HR manager in December, to help attract and retain staff, and advertised regularly, employed recruitment agencies and was using a grant to draft a recruitment and retention strategy.

She hoped once borders opened, more staff on 457 visas would be able to come and work.

Asked whether a community meeting would help address the facility's challenges, she said anything that raised awareness about the desperate need for people to work in aged care would be helpful.