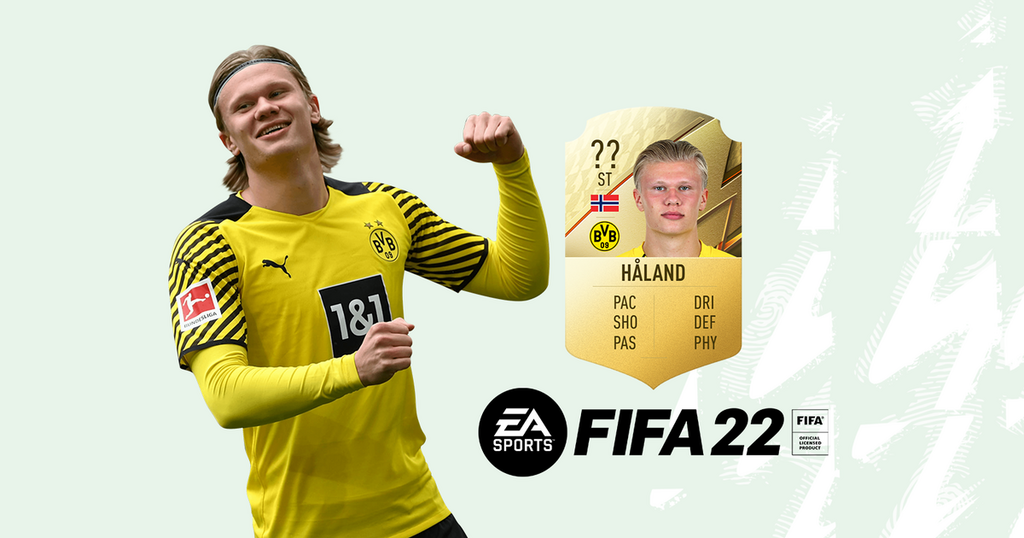 Haaland is now recognised as one of the best strikers in the world, as well as being one of the highest-rated Bundesliga players available for FIFA 22 players to use in-game.

After being born in Leeds whilst his father Alf-Inge Haaland played for Leeds United, the 21-year-old moved to Norway to begin his professional football career at Byrne before moving to Molde in 2017.

Haaland then moved to RB Salzburg in the Austrian top-flight, where he scored 17 goals in just 16 league appearances for the club, as well as announcing himself on the European stage in the Champions League.

Despite being linked with both Manchester United and Juventus, it was Dortmund that secured Haaland's signature in January 2020, for a fee of £20million which is now seen as a bargain considering his current market value is in excess of £100million.

Haaland's rapid rise to the top of world football can be shown by his FIFA ratings, as he has increased by a 30 overall rating since his addition into the game in FIFA 18.

So, let's take a look at Haaland's career journey looking at his FIFA cards throughout the years.

Haaland was added into the FIFA series in FIFA 18 as a 58 overall rated striker, with his highest individual stat being 68 pace, as well as having 57 shooting, 58 dribbling, 44 passing and 62 physical.

Haaland's addition to the game saw him be very popular for all the wrong reasons, as his individual defending stat of 18 was one of the lowest in the game, with players using Haaland's card in 'meme teams' such as "the worst defensive team in FIFA 18."

In FIFA 19, Haaland was given a huge boost to his player rating that saw him increase to a 67 overall rating and become a silver base card in FIFA 19 Ultimate Team.

During the game's cycle, he received an updated card following his transfer to RB Salzburg and went on to be included in a team of the week, resulting in Haaland being awarded a 76 rated gold inform player card.

Following an impressive season for RB Salzburg, Haaland was given yet another boost to his player rating up to 73 overall rating.

During the FIFA 20 game cycle, Haaland was awarded a 'winter refresh' after his move to Dortmund was confirmed, seeing his rating improve even further to a 79 overall rating, as his in-game player item became a rare gold card.

Along with his overall rating winter boost, his shooting was boosted massively up to a card rating of 78, whilst his passing also increased by eight up to 63.

After moving to Dortmund, Haaland's performances continued to see him be rewarded with special cards in FIFA 20 including inform cards, Bundesliga player of the month cards and a Bundesliga team of the season card.

Moving into FIFA 21, Haaland's base card received a huge upgrade from his previous 79 overall rated base card in FIFA 20, up to 84 overall rated, as he began his first full season for Dortmund.

Haaland received eight special cards throughout FIFA 21, including two Bundesliga player of the month cards, two inform cards and a Bundesliga team of the season card following a stellar season in the Bundesliga.

As we now move into FIFA 22 in the coming weeks, it has been revealed that Haaland is in line for yet another huge boost to his player rating after scoring 41 goals and registering 12 assists in 41 appearances across all competitions for Dortmund in the 2020/21 season.

Haaland will be 88 overall rated, with 89 pace, 80 dribbling, 91 shooting, 45 defending, 65 passing and 88 physical, yet we do not know what his weak foot and skill move ratings will be as they are yet to be announced by EA Sports.

Since his addition in the FIFA game series, Haaland's player rating has increased by 30 ratings from being a bronze, 58 overall rated base card to now being a rare gold, 88 overall rated card.

Comparing his FIFA 22 player card to his FIFA 21 card, the 21-year-old has been given a +5 boost to his pace, +4 boost in dribbling and shooting, +3 boost in his physical stat and +2 boosts in his passing and defending stats.

This increase to Haaland's card means he is the same rating as Mario Gomez's FUT Heroes card, making him the joint-second best Bundesliga striker available for players to use in FIFA 22, as well as being the highest-rated Dortmund player in the game.

Bayern Munich trio Robert Lewandowski (92), Manuel Neuer (90) and Joshua Kimmich (89) are the only gold cards that are higher rated than Haaland in the Bundesliga on FIFA 22.

Should Haaland have a brilliant 2021/22 season with Dortmund, you can expect him to receive another boost to his overall rating in FIFA 23, but he may well be at a different club by then.

Will you be using Haaland in your FIFA 22 Ultimate Team? And, do you think Haaland deserves the rating he has been awarded? Let us know in the comments!