Jones, who had run in in the top-10 most of the race, inherited the lead on Lap 345 of 367 when Kyle Busch – who exited pit road with the lead – suddenly saw the engine blow in his No. 18 Toyota while the race was still under caution.

Jones then led the way on the restart on Lap 348 and spent the final 20 laps holding off a fierce challenge from Denny Hamlin, finally clearing him by 0.252 seconds at the checkered flag to claim the win.

The victory by Jones – who failed to qualify for the 16-driver NASCAR Cup Series playoffs – is his first this season.

The victory came 55 years to the day for the last victory at Darlington for the Petty GMS Racing No. 43, which was by current team co-owner Richard Petty.

.@Erik_Jones and @PettyGMS pull off the upset, winning the #Southern500 in the iconic No. 43! #NASCAR pic.twitter.com/y3S1KCnZUx

“I get a hat. He told me I get a hat if I win,” Jones said of Petty. “But Richard hasn’t been to Victory Lane at Darlington probably since he last won here. It’s just awesome. Just so proud of these guys.

“On that trophy twice, man. I was pumped to be on it once, but to have it on there twice – pretty cool.”

Asked about the wild finish, Jones said, “We had a lot of good stuff go our way. We got the lead there with (Busch) losing a motor, and man, we’ve got a good shot if we can just get clear, and we had a good car, we just weren’t quite with the pace of some of those guys up front.

“We took the lead, I’m like 20 laps, I can just run hard, and those last two I was losing the balance a lot. I had been running really hard. But it was just enough. So, just really proud.”

With his win, Jones prevented one of the 16 playoff drivers from claiming an automatic lock into the second round, which would have come with a victory.

With two races remaining in the first round, Austin Cindric, Chase Briscoe, Austin Dillon and Kevin Harvick are the lowest four in points and in danger of being eliminated.

Tyler Reddick ended up third in the race, Joey Logano fourth and Christopher Bell rounded out the top-five.

Following the break between Stages 2 and 3, the lead-lap cars all pit with Busch again the first off pit road.

When the race resumed on Lap 237, Busch was followed by Martin Truex Jr., Ryan Blaney and Daniel Suarez.

On Lap 271, several teams hit pit road for green-flag pit stops. Suarez was penalized on his pit stop for speeding and had to serve a pass-through penalty.

On Lap 276, fire erupted out of both sides of Kevin Harvick’s No. 4 Ford and came to a stop at the bottom of Turn 1.

Several drivers elected to pit under the caution with Busch first off pit road. He led on the restart on Lap 284.

Truex got around Busch on Lap 294 to reclaim the lead as all six Toyotas ran in the top-10.

On Lap 318, several teams hit pit road for a final round of green-flag pit stops to take new tires and fuel to make it to the finish of the race.

Once the cycle of stops was completed on Lap 326, Truex returned to the lead. He was followed by Busch, Reddick, Jones and Bell.

On Lap 336, Truex suddenly fell off the pace and reported he had lost power steering and his engine was overheating. Busch quickly pounced and moved back into the lead.

Cody Ware hit the wall and then finally came to a stop on the track on Lap 340 which brought out the ninth caution of the race.

All the lead-lap cars pit with Busch first off pit road. Under the caution, smoke began pouring out of Busch’s No. 18 Toyota and he was forced to pit road, which turned the lead over to Jones.

On the restart on Lap 348, Jones led followed by Reddick, Hamlin and Bell.

Jones cleared for the lead quickly on the restart.

Busch held off a furious challenge from Truex to claim the Stage 2 win.

Blaney was third, Logano fourth and Byron completed the top-five. Larson received the free pass and returned to the lead lap after being four laps down at one point.

Following the break between Stages 1 and 2, the lead-lap cars all pit with Busch first off pit road.

On the restart on Lap 122, Busch was followed by Hamlin, Byron and Ross Chastain. Just as the race resumed, Chase Elliott’s 10-minute damage repair clock expired and he was done for the race.

On Lap 143, Byron reported a possible issue with his engine and had dropped to fourth in the running order.

Suarez was among the first drivers to hit pit road on Lap 151 to kick off a round of green-flag pit stops. Busch and Logano followed on Lap 152. Chastain was forced to pit a second time on Lap 162 for what he thought was a loose wheel.

Once the cycle of stops was completed on Lap 168, Busch returned to the lead followed by Hamlin, Byron and Truex.

Todd Gilliland wrecked in Turn 2 on Lap 179 to bring out the fourth caution of the race.

All the lead-lap cars pit with Busch the first off pit road. On the restart on Lap 186, Busch was followed by Hamlin, Byron and Truex.

Kyle Larson spun off Turn 4 and hit the wall on Lap 192 to bring out another caution.

Most of lead-lap cars pit with Busch again the first off pit road. When the race returned to green on Lap 198, Corey LaJoie led (the only driver to stay out), followed by Busch, Byron, Bell and Truex.

Busch, on new tires, quickly powered back to the lead on the restart.

On Lap 209, Truex ran down Busch and got around him to take the lead for the first time in the race.

Ware spun off Turn 4 on Lap 218 to bring out the sixth caution of the race. All lead-lap cars pit again with Busch the first off pit road.

When the race returned to green on Lap 224, Busch was followed by Truex, Blaney and Suarez.

Byron claimed the Stage 1 win when a caution was displayed with one lap remaining after Elliott wrecked in Turn 2 and also collected Briscoe.

“I got super free and hit the wall,” Elliott said over his team radio.

Logano started on the pole and took early command of the race but NASCAR was forced to put out a caution on Lap 6 for light rain.

After a brief delay, the race resumed on Lap 17 with Logano still out front.

On Lap 37 NASCAR displayed a competition caution to allow teams to check tire wear. All the lead-lap cars elected to pit with Logano first off pit road. Harvick had a slow stop as he left the box before one of the tires was on.

When the race returned to green on Lap 41, Logano was followed by Byron, Bell and Reddick.

After closing over several laps, Byron finally ran down Logano and passed him on the inside in Turn 2 on Lap 66.

On Lap 72, several cars dropped down to pit road to kick off a round of green-flag pit stops, with Blaney and Ricky Stenhouse Jr. among those to pit first.

Byron made his stop on Lap 76. Logano had a slow stop during his trip down pit road.

Once the cycle of stops was completed on Lap 77, Byron returned to the lead followed by Busch, Hamlin and Bell.

With 25 laps remaining in the stage, Byron maintained about a 1-second lead over Busch as Hamlin ran third.

With 10 laps to go, Byron’s lead over Busch had expanded to 1.5 seconds after Busch tagged the wall. Hamlin remained in third.

Due to multiple inspection failures on Saturday, Suarez had to start from the rear and serve a pass-through penalty after taking the green flag on Sunday. 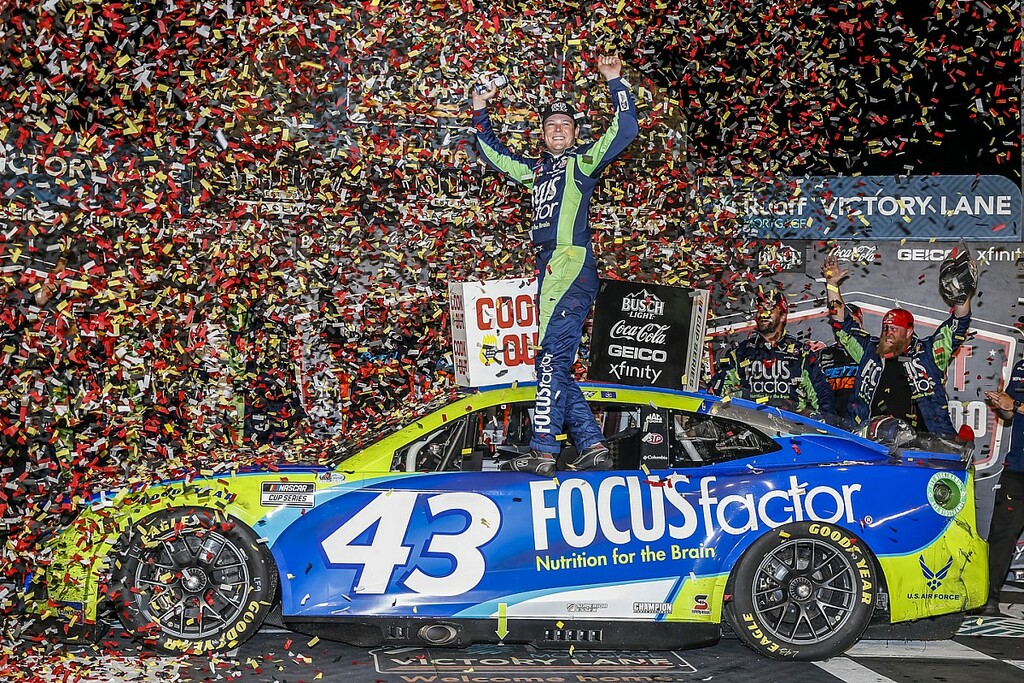 Autosport
From analysis to the latest developments in health, read the most diverse news in one place.
Darlington rundown: Erik Jones stuns Cup Series field. Where did playoff drivers finish?
DARLINGTON, S.C. -- After car troubles plagued several top drivers, Erik Jones added to the stories history of the No. 43 car. Jones took over first place on a restart with 20 laps to go and stayed in front the rest of the way to earn a win at Darlington…

Tribune News Service
Erik Jones won’t call Cup Series win at Darlington ‘redemption,’ but it felt like it
DARLINGTON, S.C. — No one who celebrated at Victory Lane on Sunday night would call this “redemption” for Erik Jones.

Motorsport
One place to find news on any topic, from hundreds of sites.
No win, but Hamlin tops all playoff drivers at Darlington

Denny Hamlin couldn’t quite run down Erik Jones in a 20-lap dash to the finish of Sunday night’s Southern 500 at Darlington (S.C.) Raceway.