Erdoğan says he is cutting all ties with Greek PM, dashing hopes of talks

A pledge by Turkey’s president to cut all ties with the Greek prime minister – and a suggestion that Kyriakos Mitsotakis was dishonourable and lacking character – has raised fears of renewed tensions between the two Nato members.

Calling off talks between the countries, Recep Tayyip Erdoğan accused Mitsotakis of deliberately antagonising Turkey when he addressed the US Congress during a visit last week to Washington.

“This year we were supposed to have a strategic council meeting,” Erdoğan said in a televised address on Monday. “From now on there is no one called Mitsotakis in my book. I will never accept meeting him because we [only] walk on the same path as politicians who keep their promises, who have character and who are honourable.”

The decision to freeze Greek-Turkish contact ends what many had hoped would be a period of détente between the perennial foes after Mitsotakis held talks with Erdoğan in Istanbul in March.

The seemingly constructive meeting, conducted over lunch, resulted in the two men underlining the need for “increased cooperation” to improve strained bilateral ties in view of the war in Ukraine.

But the Turkish leader, who will run for re-election next year, said Mitsotakis had failed to keep his side of the deal.

“We had agreed not to include third countries in our disputes,” he said. “Despite this, last week, he had a visit to the US and talked at the Congress and warned them not to give F-16s [fighter planes] to us.”

Making the historic 17 May address, the Greek leader stopped short of mentioning Turkey by name but warned Washington of the perils involved in fomenting instability in the region if arms purchasing agreements were adopted. His centre-right administration has announced a sevenfold increase in defence spending compared with last year against a backdrop of increased air incursions by Turkish jets.

“The last thing that Nato needs at a time when our focus is on helping Ukraine defeat Russia’s aggression is another source of instability on Nato’s south-east flank,” Mitsotakis told Congress. “And I ask you to take this into account when you make defence procurement decisions concerning the eastern Mediterranean.”

On Tuesday the Greek foreign minister, Nikos Dendias, said Athens would resist “falling into the trap” of escalating tensions needlessly. “There is no need to answer in the same way,” he said, expressing disbelief at the Turkish leader’s reaction to a speech that had, he claimed, not deviated from any of the positions Greece has long held.

The two countries have been at loggerheads for decades over maritime and energy issues, air and sea rights in the Aegean, the divided island of Cyprus and, more recently, migration.

Friction over rival claims to offshore gas reserves in the Aegean and eastern Mediterranean brought them to the brink of war in 2020.

But a strategic shift in US regional ties has also played a role in creating disquiet among Turkey’s military and political establishment.

Washington’s growing desire to see Greece as a “reliable” partner – expanding its military presence in the country and signing a mutual defence accord unprecedented in scope with Athens – has irked Ankara, analysts say, noting Erdoğan’s unpredictability.

On Monday, the Turkish leader raised the issue, saying: “At this moment there are 10 bases in Greece. What is the reason? Who are they threatening? For what reason are these bases being built in Greece?”

Turkey’s media has gone further, predicting a military attack being launched from one of the installations.

Kostas Ifantis, a Turkish affairs specialist who heads the institute of international relations at Athens’ Panteion University, said with a détente now “stillborn” the coming months could be a rollercoaster.

“I think we are now looking at a breakdown in communications in the short term,” he said, predicting increased Turkish activity on and around Cyprus. “ Mitsotakis’s visit to Washington is very much perceived in Ankara to have undermined any effort towards rapprochement. Turkey realises that the US has gradually reduced its strategic dependency on Turkish soil by increasing its military presence in Greece.”

For the first time in almost a year, the Greek coastguard said this week it had stopped about 600 people from crossing into the Aegean from Turkey – raising further fears of Erdoğan using the country’s large refugee population to stoke tensions.

“Erdoğan is an unpredictable and dangerous neighbour. He weaponised refugees in 2020 and he may do it again,” said Pavlos Eleftheriadis, a professor of public law at the University of Oxford. “But the Greek government is also reacting in what appears to be an unlawful way by conducting unlawful pushbacks of asylum seekers in the Evros [River] and the Aegean Sea.” 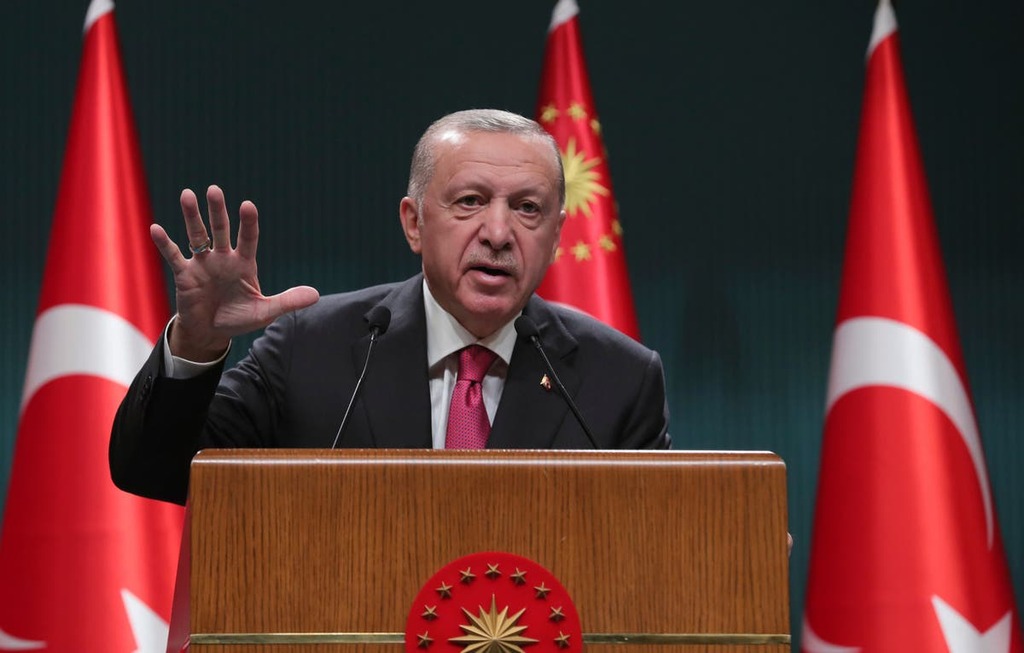 The Independent UK
One subscription that gives you access to news from hundreds of sites
Ukraine war: crisis between the west and Russia gives Turkey a chance to strengthen its hand at home and abroad

The Conversation
EXPLAINER: What Turkey's Erdogan could gain in NATO debate

Turkey’s leader has caused a stir by throwing a wrench in Sweden and Finland’s historic bid to join NATO, lashing…