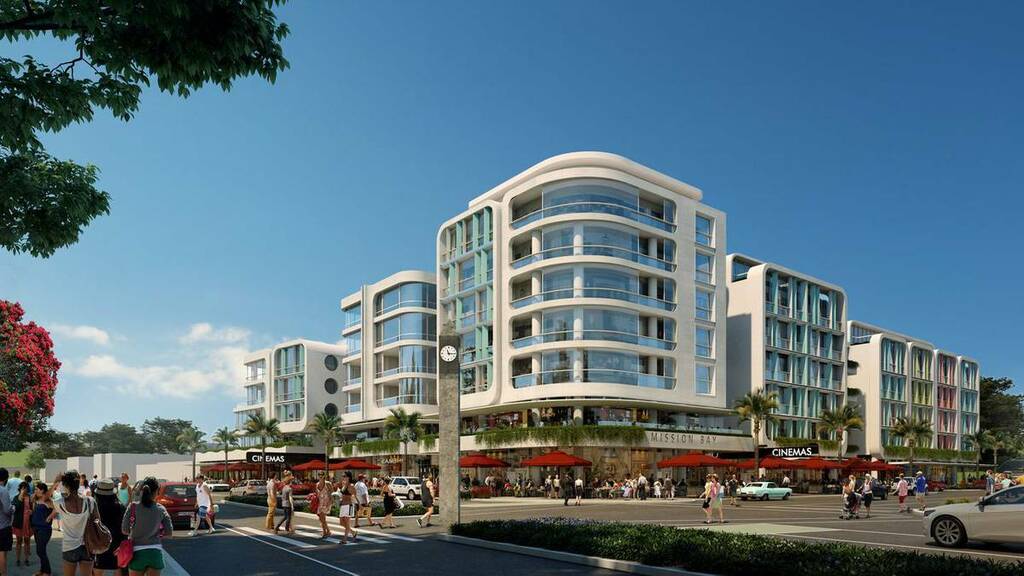 The Environment Court has turned down controversial plans for an eight-level $200 million waterfront Mission Bay retail and apartment scheme in a case which turned on building height and bulk.

The proposal would have seen major change on the seaside suburb's promenade and demolition of some well-known buildings like the De Fontein Belgian Beer Cafe.

The tallest building would have been eight storeys or 28m high compared to the Auckland Unitary Plan's 18m.

The plan met strong opposition from submitters worried that the development would change the area's character and views of the Hauraki Gulf would be blocked.

Haydn and Mark Staples' Drive Holdings appealed the council's rejection but the Environment Court last night issued its decision, declining the appeal. The Staples' company was represented by Douglas Allan.

The Staples - father Hayden and son Mark - also own companies that have land at Waiwera where the hot pools have been shut for years.

In an unusual move, it said the court was being asked to redesign the Mission Bay scheme to something that was acceptable, but that was not at all its role.

"It is not for this court to redesign a consentable proposal and we refuse to do so. We conclude that a redesign is required but there are many issues that are affected by such a redesign.

"On the basis of the applications put to this court, we refuse consent and at this stage are not satisfied there is currently a consentable proposal before us," said the decision reached by three people including Judge Jeff Smith.

She expressed satisfaction today with the outcome.

The court said it was presented with a revised plan for a seven-level alternative early in the hearing held in late May and from June 28 to July 2.

That revised scheme was lower in height and had modifications made to the bulk and scale and, three days into the hearing, Drive Holdings sought to introduce that alternative scheme.

The proposal was for an "extremely large" building 28m high on the Tamaki Dr/Patterson Ave corner.

"We have concluded that the real issue in this case is the appellant's continued pursuit of over-height residential apartments on the site."

The court backed the decision of independent hearing commissioners, saying they had been correct in rejecting the scheme.

"We heard a great deal of evidence from the different experts about the need for a distinctive building at the corner [Tamaki Dr/Patterson Ave] to mark out the local centre.

"Yet, most of the proposed floors are residential with balconies, which are private. As originally proposed, the first floor would also contain private apartments," the decision said.

The court noted "a palpable frustration by various residents" who gave evidence.

Nothing had been resolved between the developer and those community groups.

"The series of cases and disputes relating to the appropriate building heights within Mission Bay has still not led to any resolution of this issue," the decision said.

Neither the revised proposal nor the June proposal were acceptable to the court.

"It is for this court to be satisfied that the consent should be granted. Although there are two variations to this proposal, we conclude neither achieve nor implement the Auckland Unitary Plan or meet the wider purpose of the Resource Management Act," the decision said.

Kathy Davies of the Mission Bay Kohimaramara Residents Association committee said today: "It's great. The judges agreed with everything we had been saying. Hopefully, if they redesign something, it will enhance our local centre and fit within the Auckland Unitary Plan rules."

Two years ago, councillor Desley Simpson congratulated locals who had fought the scheme: "Nobody was against development of the site just against how EXCESSIVE it was against UP [Unitary Plan] rules," she wrote in 2019.

Today, Simpson said: "I am beyond ecstatic really. For me in this case, council and the committee were on the same page which is great. Our community owes a lot to the residents association, chairman Don Stock and the team of people he put together.

"They have spent about $250,000 on all this. It took a huge amount of time and energy and it now has given some framework for future decision making to stop this kind of thing happening in the future," she said.

Stock said today: "The court has recognised that the developer was largely trying to maximise profitability at the expense of the community."

He confirmed that around $250,000 had been spent by the community but said it was well worth it.

"I am disappointed that the local community had to spend that much to defend what we already thought were protection measures contained in the unitary plan," he said.

"The style, bulk and height of the proposal was out of scale with anything else in Mission Bay," he said.

Yesterday's decision would help set standards for other proposals because the unitary plan was still relatively new so the Mission Bay case could be a watershed one, he said.