‘Ensure good publicity ahead of booster’ 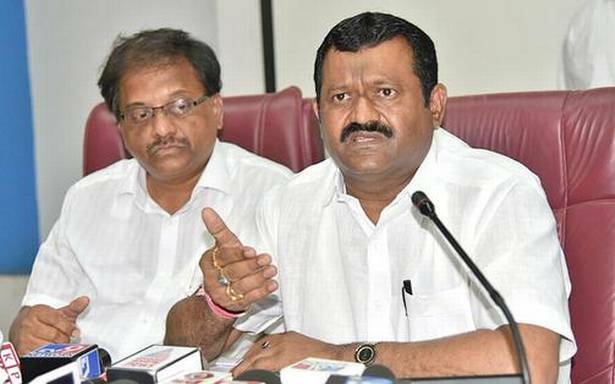 District in-charge Minister Shankar Patil Munenakoppa chaired a meeting of officers in Hubballi on Sunday, on the eve of booster vaccination drive for frontline workers and senior citizens with co-morbidities. He asked officials to ensure that good publicity and counselling, which, he said, can lead to larger coverage under the vaccination drive. He also asked officers to spread awareness about COVID-19 protocol, among the general public and school and college students.Proper treatment should be provided to COVID-19 patients, including those who come from other districts, States or countries.Health Department officers should ensure proper functioning of oxygen units and ventilator beds in hospitals, he said.

He expressed gratitude to ASHAs and anganwadi workers for the contribution in the fight against COVID-19. The Minister said that 269 cases have been detected in Dharwad district this week and 76 of them have been cured. As many as 33 are under home isolation.

Member of Legislative Assembly Jagadish Shettar asked officers to follow best practices from other States. He pointed out that the Government is yet to pay personnel who are managing the COVID-19 helpline and also the helpline 104. He expressed the confidence that they will be paid soon.

He said that the helpline has remained non-operational due to non-payment. Operators told me that they are attending between 17,000- 50,000 calls per day. They related to complaints about lack of beds and oxygen and for general advice. The helpline needs to be operationalised again, he said.

Member of Legislative Assembly Prasad Abbayya complained that the Government’s assurance of paying compensation to workers and labour who lost livelihoods in the first wave is yet to be kept.

Deputy Commissioner Nitesh Patil said that cases are doubling every two days, compared to every week in the past. He, however, said that the situation is under control in rural areas. “We have increased testing. We have appointed nodal officers to private hospitals. Officers are ensuring proper availability of oxygen. Nutritious food is being supplied to inmates of residential schools and hostels. All fairs, festivals and celebrations are banned. An online system has been put in place to issue licences for weddings.”

In Belagavi, Deputy Commissioner M.G. Hiremath visited the border check-posts in Kuganoli and other places. He asked officers to strictly enforce COVID-19 protocol related to entry of people from outside the State.