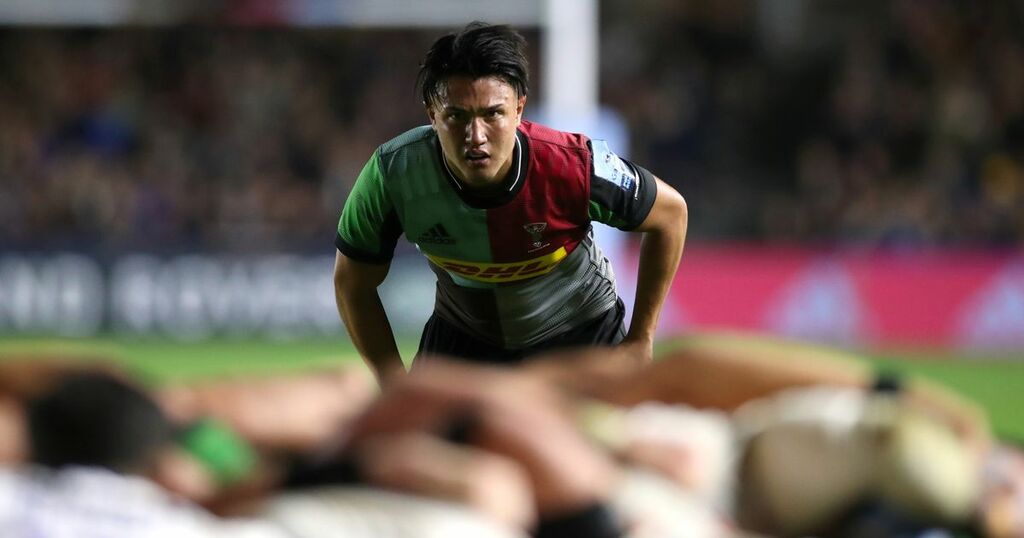 The time is now for England coach Eddie Jones to ignite the Marcus Smith era and "give him the keys to grandpa’s car" after dazzling in his development at Harlequins.

Or at least that's according to former England captain Dylan Hartley, who is ready to see his former team step in a new direction by promoting the 22-year-old starlet at fly-half.

Smith was a star performer for Quins as they upset the odds to deliver their first Premiership title in nine years last season, earning his first England caps and a call-up to the British and Irish Lions squad in July.

The youngster has since made a triumphant start to his Premiership campaign, coming on as a 25th-minute substitute against Bristol Bears on Friday when he inspired the team to a 52-24 win from 21 points down.

Hartley—who earned 97 caps for England between 2008 and 2018—appeared as an ambassador at the launch of Prime Video Sport’s autumn internationals coverage.

“Good news, the whizz kid, Marcus Smith has been included. He epitomises everything that is attacking for me," he said.

“Eddie is smart enough, I am not putting words into his mouth, not to pick Marcus and then constrict him to play a different way. I will say give him the keys to grandpa’s car, let him take a spin and be surprised if the car comes back. I don’t know what old guy they can bring back.

"Maybe bring back Danny Care, there is a reason Marcus Smith is so good. He puts the ball in Marcus Smith’s hands.”

The belief in Smith's talents is widespread at this point, but Jones faces a tough call in shifting his long-term captain Owen Farrell in order to give the young gun a run at No. 10.

Whom do you think deserves to start at fly-half for England this autumn? Let us know in the comments section.

It's possible Farrell could be moved to inside centre in an effort to accommodate Smith, the same method England have used to make room for Leicester Tigers ' George Ford in the past.

But there's a chance Saracens star Farrell could be forced to settle for a place on the bench if Jones opts for a more natural solution in midfield.

Smith was included in England's 45-man training camp ahead of autumn internationals against Tonga, Australia and South Africa, while in-form Leicester fly-half Ford was omitted.

Hartley isn't the only England alumnus advocating for Smith's inclusion, either, as former Bath prop David Flatman joined in the chorus calling for him to star next month.

“What is easy to do is watch Marcus Smith and say he has to play for England,” he said. “I say it because it is easy.

“But to pick him you have to leave George Ford out, leave Owen Farrell out, these are more difficult decisions than just picking somebody.

That ability to read the game was evident in Smith's late solo try against Bristol, where he made the most of a scrappy situation by chipping the ball behind the defence in a score he made look routine.

Harlequins attack coach Nick Evans has succeeded in promoting a fluid style of play at The Stoop, but there's no guarantee Jones will be able to replicate those conditions at international level.

Flatman concluded by saying while Smith's style of play isn't what England have been used to of late, it could be something of a cornerstone as they begin a new era.

“It will be significant," he said. "If England pick him they have to let him play his way, which is not the way they have been playing. They have got some wonderful talent, rip into it lads and use it.”

England coach Jones is expected to name his squad for the autumn series on Monday, with Smith looking a shoo-in to add to his two caps next month.