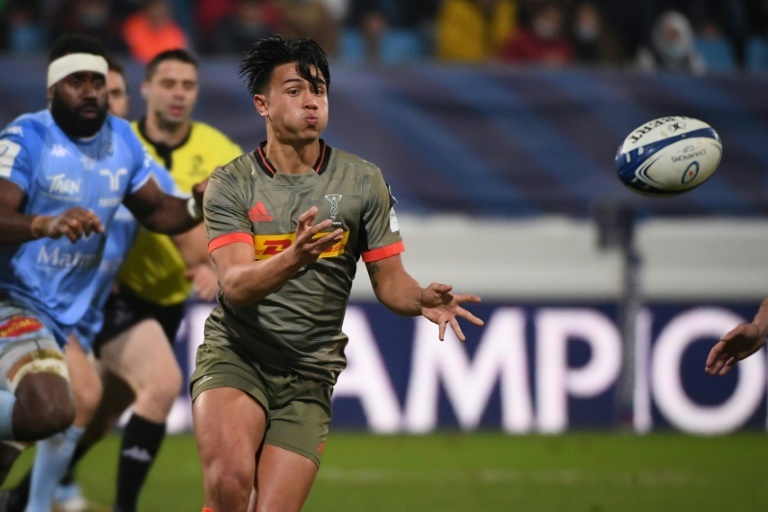 Exeter played the entire second half at the Twickenham Stoop a man down after Alec Hepburn was sent off for a dangerous clearout of Joe Marler that saw the England prop land on his head.

Quins, however, failed to make the most of several chances as rain lashed down in southwest London.

Instead, with the scores level at 7-7, it was Exeter who struck next through replacement hooker Jack Innard in the 65th minute.

But the 22-year-old Smith's kick ahead paved the way for Andre Esterhuizen's 79th-minute try, with the England fly-half then kicking the winning points from the touchline.

"That shows a top-class player, to kick from the sideline with the game on the line.You don't coach that, it's locked in," said Harlequins boss Tabai Matson of Smith, who only made his England debut in July.

Exeter director of rugby Rob Baxter was proud of the way his side played with 14 men.

"Everyone knows that yellow and red cards have a huge effect on games and we weathered that pretty well," he said.

"We're disappointed not to get more, but at the same time we've done a lot of good things.We did everything we could have to give ourselves a chance."

Elsewhere, Gloucester won at Saracens for the first time since November 2008 with a hard-fought 25-24 victory.

Since their last victory at Saracens' former home of Vicarage Road,  the Cherry and Whites had lost 12 and drawn once in 13 visits to their Premiership rivals.

Alex Lozowski, however converted just two of those efforts, the centre missing a relatively simple chance and a late kick from the touchline.

Gloucester won despite conceding 14 points without reply and losing two players to the sin-bin midway through the first half.

"I'm immensely proud of the boys to come here and win for the first time in 14 years," said Gloucester attack coach Alex King.

Saracens remained second in the table, a point ahead of capital rivals Harlequins, but unhappy boss Mark McCall said: "We are massively disappointed and it pains me to say it but Gloucester had more energy and appetite for the fight."