By Chloe Merrell at the Copper Box 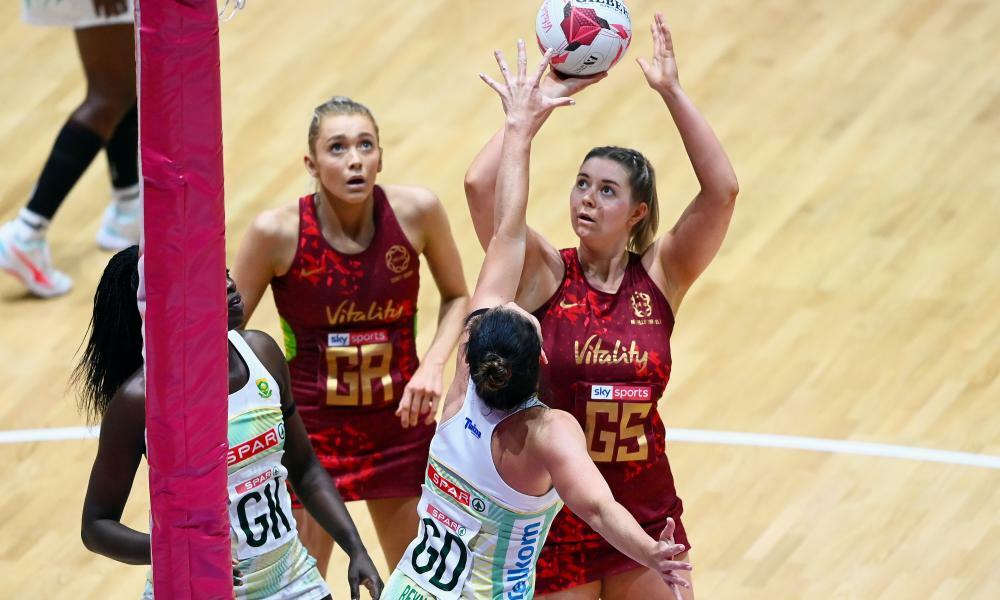 England got their Quad Series campaign off to a storming start as they comprehensively overcame South Africa’s Proteas 71-47 in the first of the tournament’s four matches.

If the question before the game was whether England would be able to own their pre-series label as favourites, then it was answered in the affirmative. For 55 minutes the Roses flexed the form that brought them back-to-back Tests wins against respected rivals, confirmed by the huge margin of victory.

It was only in the first quarter the home side looked bothered by the Proteas’ challenge. Leading the charge for England on her 150th outing was Geva Mentor who set the tone for the match when she made a gain on the ball’s first entry into her defending circle.

The flurry of action that followed was all Roses as South Africa looked backwards, breathless on the chase.

At the turn of the ninth minute, however, there was a distinct drop in England’s standards. “A little bit sloppy” was the description given by the head coach, Jess Thirlby, to the sudden lapse.

As the opportunities became available the Proteas did not hesitate to seize them. Bongi Msomi, their veteran captain, commanded her side to attention.

Driving short and directly, England were denied access to the ball and a seven-goal advantage was cut to two.

A penalty goal on the buzzer from Helen Housby gave England an extra buffer but the damage had been done.

Personnel change was the call at the start of the second quarter to quell South Africa’s rise. Georgia Fisher came on for Eleanor Cardwell at goal shooter and the 23-year-old’s injection was immediately felt. Her fluidity in the circle married with a general shift in defensive strategy by the Roses worked wonders for an team resolute on addressing their previous shortcomings.

Unable to react to the fresh developments South Africa fell once again on to the back foot, stuttering as the score at the end of the half blew out to 37-24.

The greatest gift a coach can be given by her team is flexibility and with the scoreboard singing Thirlby rested her prized possessions. Serena Guthrie, Housby and Beth Cobden were all rewarded with time on the pine.

“It’s always great when the team afford you the chance to roll in some changes,” Thirlby said, with an eye on Sunday’s meeting with the world champions, New Zealand. “We mustn’t lose sight of the task at hand with the Quad Series.”

Unlike traditional Tests the back-to-back nature of the tournament means load management features more heavily into the equation than usual.

“We’re not complacent, we know they’re going to come hard at us tomorrow,” Thirlby said about the meeting with the Silver Ferns. “They’ve got a couple of change-ups in their shooting end as well, so it will be a big challenge.”