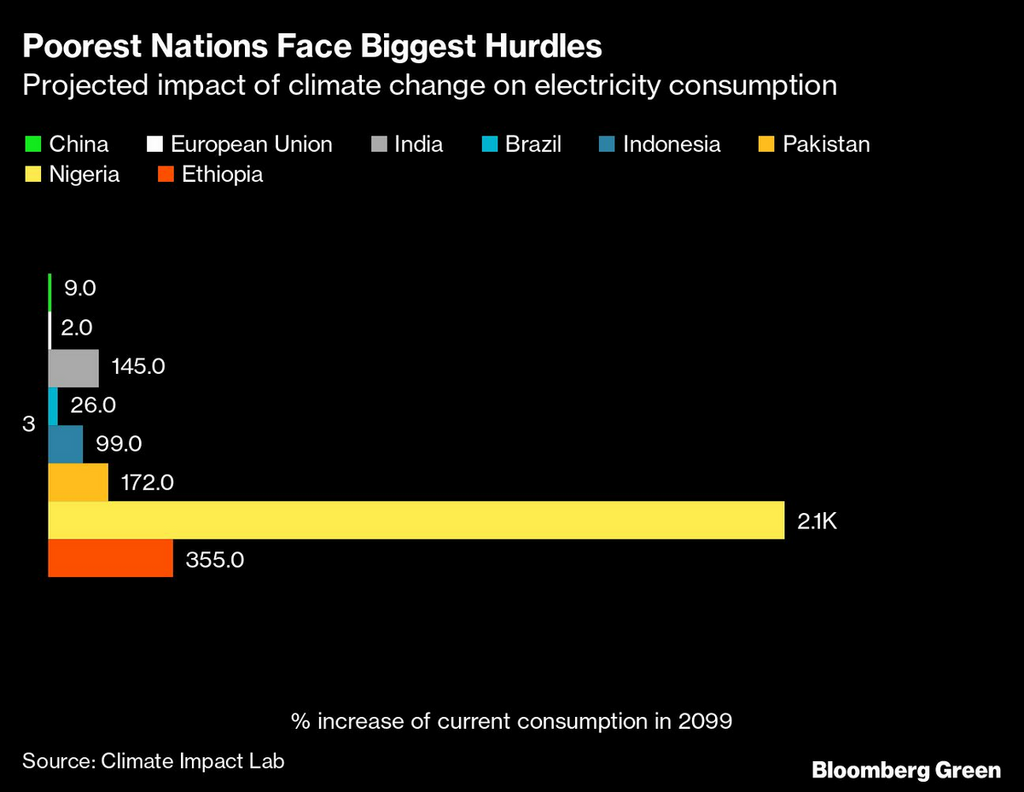 A warmer planet will shape the type and amount of energy we use. Air conditioning is likely to become critical, while rich populations in temperate areas will save money by dodging heating costs during winter. But how will poor communities in hot locations protect themselves from rising temperatures?

The last seven years have been the hottest on record. Heat waves have routinely caused record-breaking temperatures across the world in locations as far apart as Japan and Northern Ireland.

The deep divide between rich and poor will widen as the planet heats up. Air conditioning is unlikely to keep up with global warming, forcing billions of the world’s poorest people to suffer through heat unprotected.

Read More: The Debate Over Who Should Pay for Climate Damages

That’s the conclusion of a major paper published Wednesday in the journal Nature by the Climate Impact Lab, a research consortium that studies the global economic impacts of climate change.

While nine in ten U.S. homes have the luxury of air conditioning, this is true for only 5% of homes in India. As climate change continues to intensify heat waves, cooling technology remains out of reach for more than half of the world’s population, according to the research.

Electricity use in rich countries increases on cold days too. Fuel consumption rises by up to 66% in wealthy regions during extreme temperatures, but there is virtually no increase in the poorest 20% of populations, reflecting the disparity in access to costly technologies used by the rich.

By the end of the decade, energy demand in India and Nigeria is expected to increase by 145% and almost 2100%, respectively. Hot, low-income areas including much of sub-Saharan Africa are likely to remain poor through 2100 and will be unable to stay cool through heat more intense than humanity has ever experienced.

The research is the latest piece of Climate Impact Lab’s larger work assembling a comprehensive estimate of how much every emitted metric ton of carbon dioxide costs the global economy.

U.S. policymakers have relied on similar estimates, called the social cost of carbon, to evaluate the benefits of climate-friendly regulation and laws in cost-benefit analyses. The Biden administration currently places this figure at about $50 a ton. Last year, Climate Impact Lab found that the contribution to the social cost of carbon from heat-related mortality alone could be as high as $37 a ton.

Researchers found that emitting one extra ton of carbon dioxide today will help reduce future energy spending by lowering the need for fuels. That values the social cost of carbon for energy consumption from -$1 to $3 savings per ton.

In July, the Biden administration promised to deliver 40% of the benefits from Federal investments in clean energy and climate to disadvantaged communities. Climate Impact Lab says its report, which uses data and estimates from 146 countries over a 40-year period, should help policymakers to define that group by focusing on the local impacts of climate change.

“Every additional ton of greenhouse gas causes a measurable impact on society,” said Robert Kopp, co-director of the Climate Impact Lab. “Emissions stay in the atmosphere for hundreds of years, so improving our understanding of local climate damages will be essential to taking the action we need to prepare for future risks.”